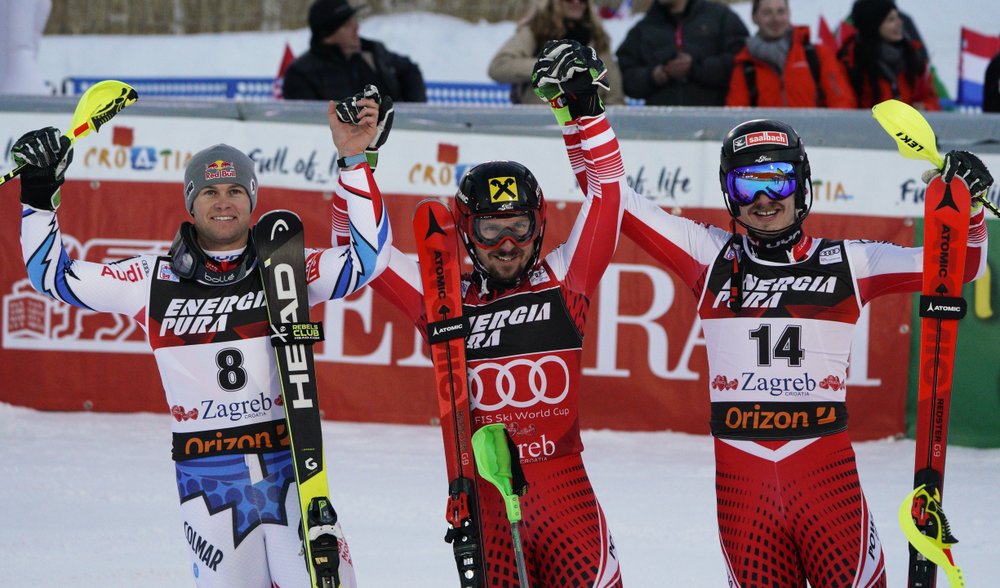 Marcel Hirscher returned to winning ways Sunday, triumphing in the first men’s World Cup slalom of 2019 after he had missed the podium in the last two races.

The seven-time overall champion trailed Austrian teammate Marco Schwarz after the opening leg but posted the fastest time in the final run before Schwarz straddled a gate and failed to finish.

“It was today definitely not the easiest victory I have made so far,” said Hirscher, who has won 10 of the last 12 slaloms. “But in the end of the day I am super, super happy. It was quite a hard day of work.”

It was Hirscher’s 64th career win and 30th in the discipline. Only Sweden’s Ingemar Stenmark (40) and Italy’s Alberto Tomba (35) have won more men’s slalom races.

Hirscher rarely misses out on a podium in consecutive races. The last time he didn’t make the podium in three straight races was in February 2016.

After placing 26th in the last slalom of 2018 in Italy and starting the new calendar year by placing seventh in the city event in Oslo, he spoke of “a mini-crisis.”

His focus on winning is so big, that he calls finishing 26th or even seventh a “DNF,” a did-not-finish.

“After finishing two races with a DNF, it is nice to be back in the finish area with another 100 points. The last two races not scoring points was not fun, it was making me nervous, even after all those years,” he said, adding that “the people in Austria want to see me winning, or at least on the podium.”

And Hirscher was fast to acknowledge that Sunday’s win had “not really” ended his doubts.

“The feeling is a little bit weird with the changing conditions we have this year,” Hirscher said. “It is hard to find the right set-up for each terrain and for every condition.”

Alexis Pinturault of France was 0.60 seconds behind Hirscher in second, and Manuel Feller of Austria was another 0.02 further behind in third for his first career slalom podium.

Pinturault returned to a slalom podium for the first time since winning in Wengen, Switzerland, five years ago.

“I had troubles finding my best level and with my skis and the setup. These were really hard years,” said the Frenchman, adding he had put more focus on slalom training again last summer.

“We have been a pretty good and fast team the last years, too. We are getting better and better,” Feller said. “The coaches did a really good job, we came out of nothing. And with Marcel as our leader, we know how fast we have to be to get to the top.”

It was Hirscher’s fifth victory on the outskirts of the Croatian capital. No other male skier has won more slaloms at a single resort. Only Stenmark (in both Madonna di Campiglio and Kitzbuehel) and Tomba (in Sestriere) have also recorded five wins at one venue.

Watched by 10,000 spectators along the icy Crveni Spust course, Hirscher started the race with a solid run but still trailed Schwarz, who led an Austrian sweep of the top three in the opening run.

Five days after winning his first World Cup at the city event in Oslo, Schwarz was 0.37 faster than Hirscher, while Feller was 0.42 behind in third. Pinturault was 0.77 off the lead in fifth.

On a course set by his coach Helmut Grassl, Olympic champion Andre Myhrer of Sweden finished 2.71 seconds off the lead and failed to qualify for the second run.

The men’s World Cup continues with another slalom and a GS in Adelboden, Switzerland, next weekend.