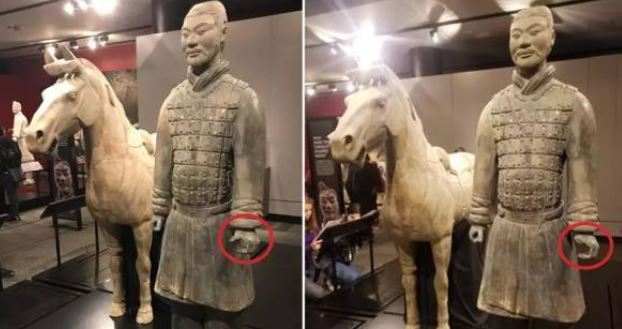 The Terracotta Warrior on display at the Franklin Institute in Philadelphia. (Photo: china.org.cn)

The Shaanxi Cultural Heritage Promotion Center said on Thursday that it was exploring options for a civil case for compensation to pay for damage done to a Terracotta Warrior during an exhibition in the United States, according to a report by Beijing Youth Daily.

The statement follows the news of a mistrial on Tuesday in the case of American man Michael Rohana, who is accused of breaking the thumb off the Terracotta Warrior while it was on display at the Franklin Institute in Philadelphia in 2017.

The 25-year-old admitted to taking the thumb but said it was a stupid mistake rather than vandalism and theft. The jury was unable to reach a verdict on whether he was guilty of charges of theft and concealment of an object of cultural heritage.

The US Attorney has until May 15 to decide whether to retry the case.

The Emperor Qinshihuang Mausoleum Park, which owns the Terracotta Warrior, has asked experts to prepare a restoration plan for the statue. Rohana returned the broken thumb to American authorities, and it has been sent back to China but not yet reattached.

The Shaanxi Cultural Heritage Promotion Center has promised to take additional measures to ensure the safety of cultural heritage items it loans out for exhibitions.