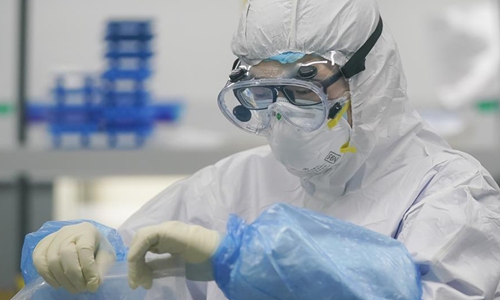 Autopsies on 11 deceased COVID-19 patients' bodies have been conducted in the last week in China with vital discoveries being made on the disease, according to an autopsy team in Wuhan.

From February 16 to Monday, a team led by Liu Liang, a forensic specialist from the Tongji Medical College at Huazhong University of Science and Technology, finished autopsies on nine deceased COVID-19 patients and achieved vital discoveries, media reported Tuesday.

Liu told the media that he would discuss with clinical doctors the findings, which would improve understanding of the virus.

The discoveries have been reported to related authorities and possibly would be officially released soon, a member from Liu's team told the Global Times on Tuesday on the condition of anonymity.

The member said that the team would continue working on the samples. "There is a lot of work that has not finished yet."

Liu said his team had finished pathological studies on three of the nine samples they dissected, whose ages ranged from 52 to 80. Twenty members of the team are accelerating the research on the rest of the samples, according to Liu.

An autopsy is the most direct means to uncover the virus, Wang Guoping, another co-leader of Liu's autopsy team and doctor from the Wuhan Tongji Hospital affiliated with the university, told media.

Comparison between pathologic changes and clinical changes can help to reveal the nosogenesis of the disease and study the cause of death, thus improving clinical treatment and disease prevention and control, Wang said.

The effectiveness of autopsies was proven as early as 2003 in the SARS crisis. At the early stage of the crisis, it was widely believed that SARS was caused by chlamydia. But Ding Yanqing, a pathologist from the First Military Medical University, conducted autopsies on deceased patients later and revealed that SARS was caused by a virus, leading the fight against SARS to a new stage.

Besides Liu's team, two more other autopsies have been finished by Bian Xiuwu and a team from Shanghai Ruijin Hospital, according to media reports.