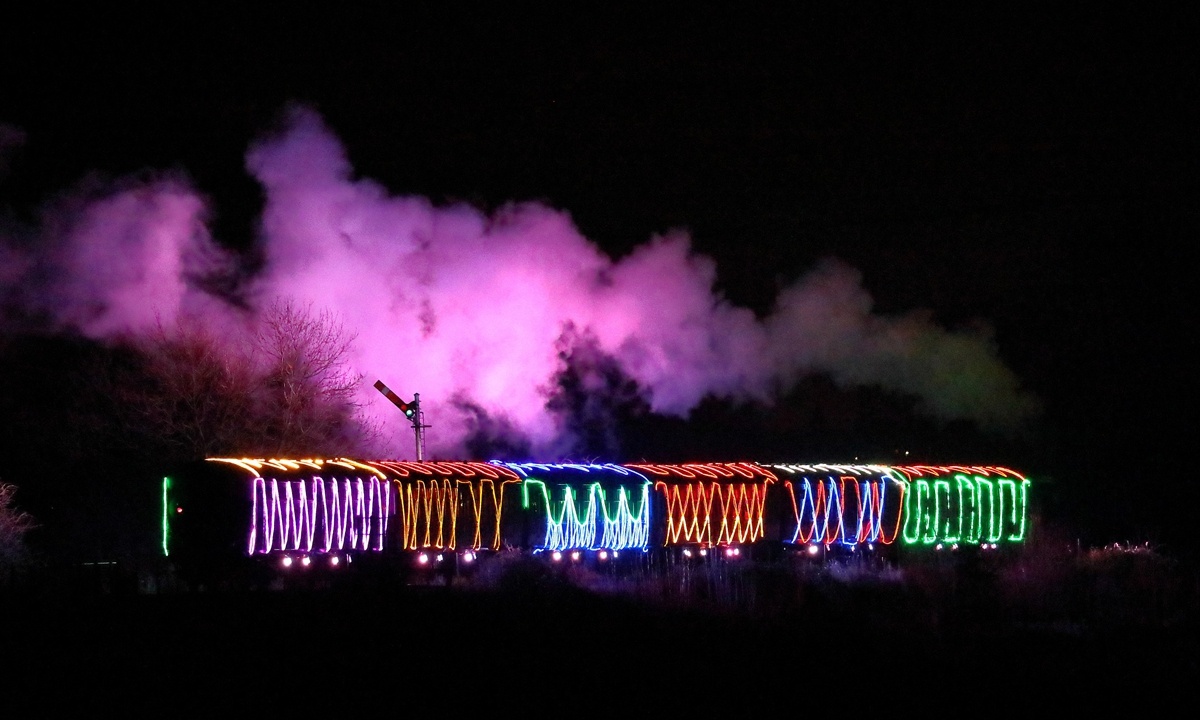 The Nene Valley Railway Winter Light Spectacular steam train locomotive travels through the darkness as it makes its way towards Peterborough, England on December 14. (Photo: VCG)

It was one of the quintessential European travel experiences.

With passengers cradled to sleep by the clank of the wheels on the rails, the network of night trains that spanned the continent inspired travelogues, thrillers and films.

But the cost required to keep them running, coupled with the growth of high-speed day trains and the popularity of budget airlines, meant that the era of the couchette and wagon lit was quietly fading into the night.

Key routes were cut and the intricate network of overnight routes across Europe was reduced to just a handful of services.

But increasing awareness among passengers and governments of the carbon footprint from air travel - coupled with shrinkage in the airline sector due to the coronavirus epidemic - means that night trains may be in line for an unexpected renaissance.

Austria, France and Sweden are among countries pressing for a return to night train travel that may yet see more of us tucking up for the night in a cosy wagon lit.

President Emmanuel Macron of France - which over the last years stripped down its overnight domestic services to just a pair of routes - announced in July the government would "redevelop" night trains as part of a campaign to reduce emissions.

Secretary of State for Transport Jean-Baptiste Djebbari said that overnight connections between Paris and the Mediterranean city of Nice, as well as with Tarbes in the Pyrenees, would be restored by 2022.

He said there was in particular a "young population that is paying attention to carbon emissions" and is prepared to take a little more time to travel.

Overnight trains were cut one after another in France over the last years, hardly surprising in a country where the high-speed TGV now whisks passengers from Paris to Marseille in just over three hours.

Just two lines survive due to a lack of alternatives for passengers between Paris and Briancon in the Alps and Cerbere in the Pyrenees.

They cost the state 20 million euros ($24 million) to keep running annually, plus 30 million to renovate the trains.

Signs of a revival in overnight travel are even more apparent elsewhere in Europe, notably in Austria where state railway operator OBB has been blazing a trail for international services. OBB bought up old night train operations of German operator Deutsche Bahn and is now planning to buy 20 new trains for 500 million euros.

It is now possible to hop on a train in Vienna and wake up in Brussels.

"Over the coming years we want to focus on building up the network of night trains," Austrian Environment Minister Leonore Gewessler told the Kleine Zeitung newspaper.

"We want to strengthen this role as a trailblazer," she added, referring to the fact that Vienna is served by more night trains than any other city in Europe.

Another model for night trains is Sweden, the home of the concept of flygskam (flight shame) advocated by teen anti-global warming activist Greta Thunberg who won't take planes and makes much of travelling to conferences aboard night trains.

The government is planning to invest 400 million krona ($46 billion) to relaunch daily connections between Stockholm, Hamburg, Malmo and Brussels by summer 2022.

It is too early to declare a night train revolution in Europe, with some operators much more wary about bringing them back.

Industry participants acknowledge there has to be a better solution than the standard six-person European sleeping couchette, which contains two sets of three bunk beds separated by a small gap.

This is all the more important in the era of the coronavirus, where few passengers will want to spend the entire night in a confined space with potentially five complete strangers.

"We can't just say that we want night trains. We need to reinvent the night train," said Fanichet of SNCF.