CULTURE Bangladesh's most celebrated swimmer hangs up trunks at 67

Bangladesh's most celebrated swimmer hangs up trunks at 67 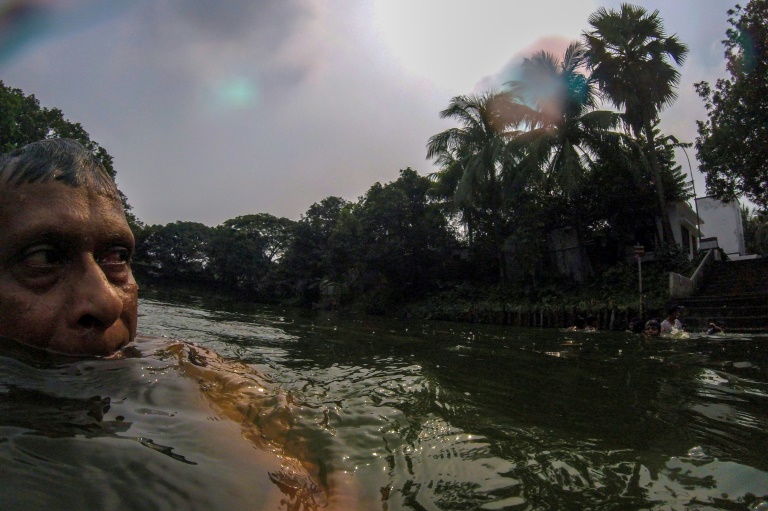 Kshitindra Baisya, who has spent nearly half a century navigating Bangladesh's thousands of miles of rivers, swimming in a lake in Dhaka (Photo: AFP)

After nearly half a century navigating Bangladesh's thousands of miles of rivers, the country's most celebrated swimmer has hung up his trunks -- but not before one final, arduous paddle upstream.

Kshitindra Baisya, 67, plans to spend his retirement on dry land inspiring younger generations to embrace the water in a country criss-crossed by huge rivers but where few swim.

"I didn't have much idea about the beauty of this country until I swam dozens of its rivers," Baisya told AFP.

A veteran of Bangladesh's 1971 independence war against Pakistan, Baisya taught himself to swim at 18 and before long was paddling marathon distances along murky channels.

A decade later, the father-of-two earned some notoriety when he swam 74 kilometres (46 miles) of India's Bhagirathi river.

He opts for a methodical breaststroke, head above water, rather than the freestyle preferred by purists.

"It helps preserve energy," he told AFP as he stretched before a dip in a Dhaka pond recently.

"I am addicted to swimming. Everyday, I swim three to four hours," he said.Baisya has not broken any speed records -- but his self-taught technique has allowed him to cover vast distances solo during a career unrivalled in Bangladesh.

He has never strayed from a winning formula of yoga, basic exercise and a humble diet complemented with dates and bananas for energy.

But as he approached 70, the veteran swimmer knew it was time to call it a day -- but not before one last triumph.

Baisya had always wanted to swim the Bhugai, Kangsha and Maghra rivers in Bangladesh's north -- uninterrupted and in one long slog.

Tailed by a support canoe and fans lining the riverbanks shouting his name, Baisya swam 185 kilometres in an unbroken 61-hour marathon -- a possible record for someone of his age, organisers said.He had a crack in 2017 but fell short, before returning to try again one last time in September.

Apart from the sheer distance -- and fighting fatigue as he swam through two consecutive days and nights -- Baisya had to negotiate polluted stretches of river that irritated his skin.

"It was a difficult task as the water was almost stagnant due to a lack of monsoon rains. On top of that, parts of these rivers were polluted, with garbage floating around," he said.

On September 5, at around 8:00 pm (1400 GMT), Baisya crossed the finishing line with thousands cheering him on.

He was taken to hospital for health checks but was declared fighting fit -- allowing organisers to breathe a sigh of relief.

"We were tense," said Aditi Bhusan, one of those monitoring the epic swim.

Organisers said Baisya had become the oldest swimmer on record to cross such a distance -- further even than Diana Nyad, an American who in 2013 crossed 165.7 kilometres of the Florida Straits at the age of 64. They are seeking to get this record confirmed."He was quite old to make such a daring attempt. But he was very stubborn, and mentally strong."

He has attracted attention overseas, with the World Open Water Swimming Association naming Baisya a candidate for their 'performance of the year' award.

Baisya was a "worthy nominee" for "pushing the boundaries of what is possible in the open water at an advanced age", the California-based association said.

His swansong done and dusted, Baisya has turned his attention to another lifelong pursuit -- getting young Bangladeshis into the water.

It is no easy feat in a country where few children can swim and 18,000 drown every year -- nearly 50 a day on average.

The dangers are part of everyday life in Bangladesh, a delta nation where around a quarter of the 160 million population live by the sea.

But Baisya hopes his determination and love of the water will inspire others to take the plunge.

"I truly hope young swimmers will be motivated by watching what I do at this age," he said.