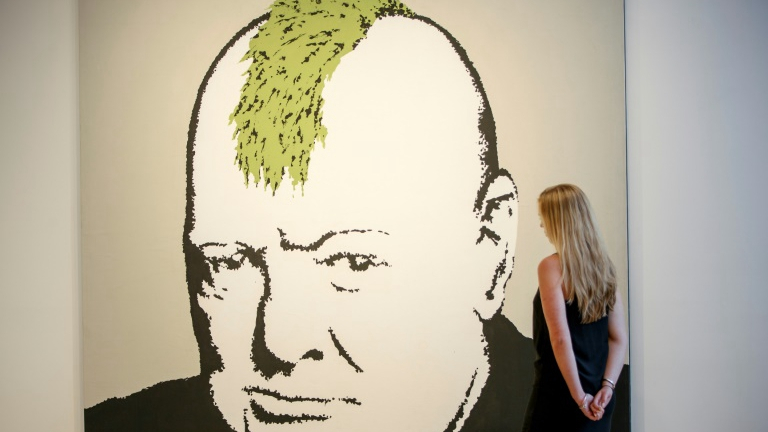 Street artist Banksy is known around the world for his simple graffiti stencils, often with a sharp political point, but a new London exhibition is an opportunity to discover his wider talents.

The mysterious British artist from Bristol, southwest England, made his name with clandestine street murals but has also produced a treasure trove of other kinds of images as the value of his work soared.

"You've got quite a few different styles here, you've got everything from the stencils to the paintings to the crude oils," said Steve Lazarides, co-founder of the Lazinc gallery where the show opens on Thursday.

It includes classics such as "Girl with Balloon", a black and white image of a little girl letting go of a red heart-shaped balloon, and "Flower Thrower", depicting a masked protester ready to throw a bunch of posies.

But there are also lesser known works such as the oil painting "Sunflowers from Petrol Station" depicting Van Gogh's Sunflowers withered in a vase.

None of the framed pictures in "Banksy, Greatest Hits: 2002-2008" were made on the street - all were made to be sold and are on loan from private collectors.

The show examines a prolific period when Banksy organised some of his most significant shows such as Crude Oil, Barely Legal, and Turf War.

Lazarides met Banksy, whose identity remains a mystery, in 1997 when he said he noticed his "visceral energy", and became first his photographer and then his gallerist.

"At this time he was free, he didn't have the kind of expectations he has now. He was just painting for fun," he recalled in an interview with AFP.

Over the years, the value of Banksy's art exploded and he began producing paintings and limited edition prints, which allowed him "to do more and more elaborate street operations".

In 2008, a collaboration with Damien Hirst, "Keep It Spotless", was sold at auction at Sotheby's in New York for 1.8 million US dollars (1.5 million euros).

Pointing to an oil painting parodying Monet's water lilies, 2005's "Show Me the Monet", Lazarides remarked: "That painting would have been 15,000 pounds when we sold it.

"The client now wants to sell it for [almost] 5 million pounds."

The artworks can be bought by visitors to the gallery, but Lazarides warns that there is very little under 500,000 pounds.

He believes Banksy has become one of the most popular contemporary artists because "he doesn't make people feel scared".

"He popularised art among the general public and suddenly it was OK to say that you like art and you didn't need an art history degree to understand it," he said.

He said Banksy had become "more and more political" over the years, for example in recent works in Paris where he took aim at the French government's hard line on migrants.

His anonymity has given him something of a mythical status, which Lazarides feeds, saying: "It could be a team, it could be twins, a woman, who knows?"