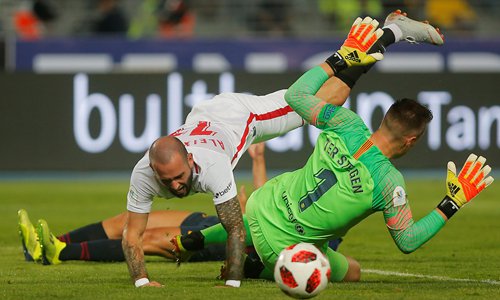 Barcelona lifted the Spanish ­Super Cup for a record-­extending 13th time by coming from behind to beat Sevilla 2-1 on Sunday thanks to a stunning strike from France winger Ousmane Dembele and a penalty save in stoppage time from Marc-­Andre ter Stegen.King's Cup runners-up Sevilla took a surprise lead in the traditional curtain raiser to the season against Barcelona when Pablo Sarabia fired home in the ninth minute after Luis Muriel had powered his way through the Barca defense.The video assistant referee was used for the first time in Spanish soccer to award the goal, which had initially been ruled offside.Gerard Pique leveled for Barca shortly before halftime by pouncing on the rebound after Lionel Messi's free kick had ricocheted off the post, while ­Sevilla's Franco Vazquez glanced a header off the crossbar in the second half in Tangier, Morocco.The competition, which ditched its traditional two-legged format and was also played outside Spain for the first time, looked to be headed for extra time until Dembele let fly from outside the area and his shot thumped in off the crossbar in the 78th minute."It was a really difficult game because we conceded very early and we had to fight back. A lot of players have only recently come back from breaks and that took its toll," Barca coach Ernesto Valverde told reporters."We grew as the game went on. It was an exciting game and they also had their chances. It's good to win because it gives you belief in what you are doing and it allows you to start the season on the front foot."Sevilla had a golden late chance to force extra time when former Barca player Aleix Vidal was fouled by Ter Stegen in the 89th minute, but substitute Wissam ben Yedder struck his penalty softly along the ground and the towering German goalkeeper comfortably caught the ball."My team deserve a lot of credit for showing that we have soul spirit and courage after Dembele's great goal, and not only did we win a penalty but we also swarmed all over their goal," said Sevilla coach Pablo Machin."It hurts a lot to lose a trophy like this but when your team competes until the end and shows spirit like they did tonight, you can't ask for much more."Barca's new captain Messi lifted his first piece of silverware since inheriting the armband from former midfielder Andres Iniesta, and the Argentine also overtook the Spaniard as Barca's most decorated player with 33 trophies to his name.