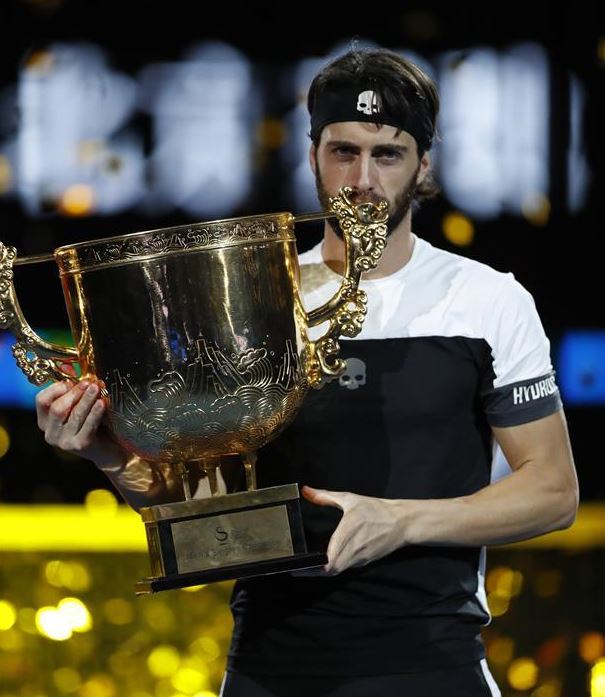 Nikoloz Basilashvili of Georgia kisses the trophy during the awarding ceremony of the men's singles event at the China Open tennis tournament in Beijing, capital of China on Oct. 7, 2018. Basilashvili won 2-0 and claimed the title. (Photo: Xinhua)

On paper, del Potro began the match as the hot favorite, with the tournament's No. 1 seed having enjoyed a day's rest after his semifinal opponent Fabio Fognini withdrew injured.

By contrast, unseeded Georgian Basilashvili had endured an energy-sapping matchup with Britain's Kyle Edmund en route to the final.

But Basilashvili clearly hadn't read the script when he broke del Potro's serve in just the third game.

The Argentinian had been struggling with a cold all week, and though he served five aces, he seemed rattled by the ferocity and frequency of Basilashvili's baseline strokes.

While not all of them found their intended target, the Georgian did enough to take the first set in 46 minutes.

The second set began as the first had ended, with both players serving big and seeking to stretch their opponent with powerful baseline strokes.

Though del Potro served up another four aces across his first two service games, Basilashvili was equally effective on serve as the two traded blows.

Matters came to a head in a pulsating eighth game, when del Potro failed to convert three break points that would likely have shifted momentum the Argentinian's way.

This seemed to affect del Potro, whose miscued drop-shot in the following set saw Basilashvili break serve once again to serve for the match at 5-4.

In another engrossing game that ebbed and flowed, del Potro saved two match points before failing to convert two break points of his own.

Basilashvili would not be denied a third time, however, and after making del Potro work as he had done all game, eventually closed out the match in one hour 41 minutes.

This is the Georgian's second ATP World Tour 500 Series win this year, after his victory in the German Open in July.

Speaking afterwards, del Potro acknowledged that illness had affected his performance. "As you can see, my game today wasn't good as it had been in the last few matches. I had some problems the last three days, and it affected my game."

However, the Argentinian also paid tribute to Basilashvili, saying the Georgian was a worthy victor. "Nikoloz played unbelievable. He played a really strong game, and played smart points in the important moments. I think he deserved to win because I couldn't play at my best level."

Despite his defeat, del Potro can console himself with the fact that he now has enough ranking points to have qualified for the 2018 ATP finals in London next month.