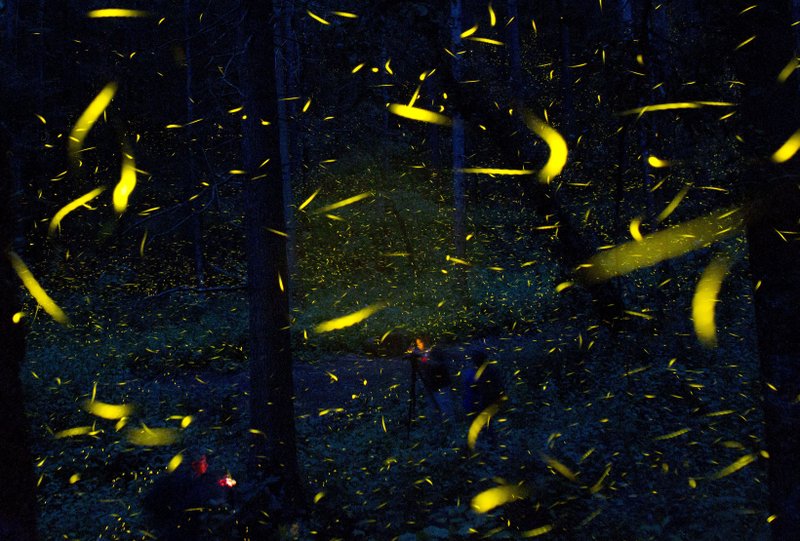 A study released on Wednesday, Aug. 22, 2018 in the journal Science Advances, says that fireflies seem to use their lights to tell bats they taste bad. (Photo: AP)

Fireflies flash not just for sex, but survival, a new study suggests.Scientists wanted to find out if there’s more to the lightning bug’s signature blinking glow than finding a mate. Some experts had speculated it was a glaring signal to predators, like bats, that fireflies taste bad.

To test out whether the glow acted like a flashing bad Yelp review, researchers at Boise State University put bats and fireflies in front of high-speed cameras. They published their results in Wednesday’s journal Science Advances .

The painstaking experiment required researchers to introduce western bats, which had never seen lightning bugs before, to the insects. Later, they hand-painted firefly bellies black, essentially turning off their night lights, avoiding the holes the critters breathe through.

When the bats first saw the unfamiliar lit-up fireflies, they swooped in and munched on them, only to get a bad taste in their mouths.

“They shake their heads, salivate and spit and generally despise their caretakers for giving such a rude meal,” said study author Jesse Barber, a Boise State biology professor.

After a few tries, the bats then avoided the glowing fireflies. (Despite the popular misconception, bats aren’t blind, a study author noted.)

Once the fireflies essentially taught bats that they taste bad, Barber and colleagues introduced the darkened fireflies. About 40 percent of the painted ones were munched, while none of the normal fireflies were eaten.

Scientists also think the way lightning bugs fly signals what they are. To test that they put fireflies on fishing lines to change how they flew and the bats went after them, despite already knowing that fireflies don’t taste good.

The results make sense and are valuable, said outside expert Nick Dowdy, a Purdue University researcher.

Scientists already knew that fireflies have distinctive flash patterns that tell others who they are and where they are. And some females prefer males that flash at higher rates, according to study co-author Marc Branham of the University of Florida.

Barber noted that even in their larval stage, the bugs glow and don’t get munched on. So he theorized that when it comes to evolution, fireflies’ glowing trait may have developed first as protection from predators and later became a sexy signal.

So, Barber said, “bats may have invented fireflies.”