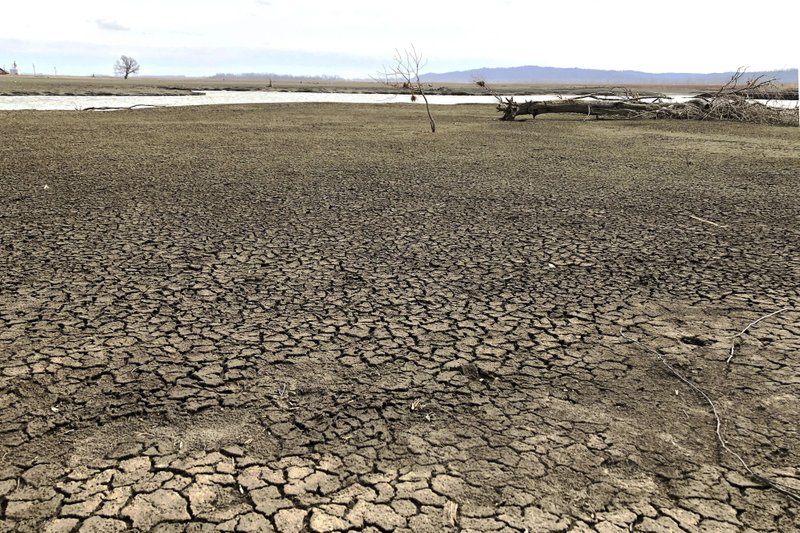 This photo taken March 12, 2020, near Rock Port, Missouri, shows once-productive farmland that was ruined after a Missouri River flood blew open part of an earthen levee and inundated the area in 2019. The landowner is among several in the area who have offered to sell about 500 acres so the levee can be moved farther back, giving the river more room to roam. (Photo: AP)

Hollywood Beach Road was once such prime real estate that the neighborhood had its own airstrip, enabling well-heeled residents to zip back and forth between homes in nearby St. Louis and weekend cottages on the Meramec River in suburban Arnold, Missouri.

Floods eventually took their toll. Nowadays, all that remains of those waterfront dwellings are crumbling concrete foundations amid a tangle of skinny trees and beaver-gnawed stumps. Nature is reclaiming the area — and is welcome to it, local leaders say.

Instead of building levees to keep floodwaters out, Arnold has used federal and local tax dollars to buy out hundreds of homeowners so the landscape could revert to wetlands that soak up overflow waters.

Those wetlands helped the town of 21,000 escape major damage in 2019 when the Mississippi River reached its second-highest level on record. And they reflect a pattern quietly emerging from a growing number of communities that could help the nation’s midsection cope with rivers often surging beyond their banks at this time of year.

Each spring, melting snow in the north and seasonal rains send huge volumes of runoff into waterways that have been heavily armored to protect surrounding land from flooding. This system of levees, dikes and walls usually held up during the last century but is now being over-topped more frequently by heavier storms that scientists link to global warming.

Floods in the Missouri, Mississippi and Arkansas river basins caused $20 billion in damage in 2019, the second-wettest year on record. The National Weather Service forecast moderate to severe problems in 23 states this spring but said last week the risk had declined because of below-normal rainfall in the past two months. Longer term, one government assessment predicts annual flood damage in the Midwest growing by $500 million by 2050.

But the floodplain awaiting this year’s surge is part of a changing picture, altered from just a few decades ago. It is now dotted with more parks, marshes and forests on land surrendered in recent years by communities and individuals. Some experts envision this expanding green patchwork as a promising model for relieving pressure on a river system that can no longer stay in its man-made channels.

“It’s becoming evident that we have to do something different,” said Colin Wellenkamp, executive director of the Mississippi River Cities and Towns Initiative. “That increasingly means shaping our cities around the river instead of shaping the river around our cities.”

To give rivers more room to sprawl, cities are keeping adjacent lands for limited uses such as parks that can flood when rivers rise. A few rural levees have been set back or removed to create wider flow paths. Wetlands have been restored as buffers.

In Arnold, the improvement was evident after last year’s Midwestern floods, said Robert Shockey, police chief and emergency management director. “Instead of 100 homes getting wet, we have a dozen.”

No one suggests replacing levees, dams and walls as a primary means of flood control.

“But they need to be augmented by natural assets,” said Wellenkamp, whose organization represents nearly 100 municipalities.

This approach is gradually catching state and federal policymakers’ attention. The U.S. Army Corps of Engineers, which has built dams and levees since the late 19th Century, is becoming more receptive.

Congress has instructed the agency in recent years to consider “natural” or “nature-based” flood control measures.

“We are definitely trying to make sure we’re giving these features a fair shake,” said Maria Wegner, senior policy adviser with the Corps headquarters in Washington, D.C.

Experts don’t know exactly how many land buyouts or set-asides have taken place to create new buffers, but said the cases are adding up. Wellenkamp’s organization has commissioned a study to compile a list.

Some projects emphasize restoring wildlife habitat, with flood prevention an additional benefit. In one case, the Army Corps moved back a levee south of Hannibal, Missouri, to open about 325 acres to river flow.

But for many towns, flood control is the primary motive.

Davenport, Iowa, is in the vanguard of rethinking flood control. Even after waters covered its downtown business district last year, the town decided against a flood wall. Instead, it will continue relying on parkland along its 9-mile-long Mississippi riverfront and on a 300-acre marsh.

The small town of Grafton, Illinois, perched where the Mississippi and Illinois rivers meet, also has rejected building walls that would obscure scenic views. Instead, it used sediment dredged from a marina to recreate a wetland in a shallow area of the Mississippi.

Similar projects are being tried elsewhere. Minneapolis went with natural floodwater retention basins instead of levees to protect a new mixed-use development. Dubuque, Iowa, restored a Mississippi tributary creek and floodplain paved over a century earlier. Cape Girardeau, Missouri, created a natural area for floodwaters rather than extend a wall north of town.

Skeptics question whether natural features can play a major role.

“You’re seeing a little bit of a trend,” said Nicholas Pinter, an earth sciences professor at the University of California, Davis. But such projects are “small in scale and the exception to the rule.”

Some attempts to give rivers more room have drawn resistance — particularly along the Missouri, the nation’s longest.

Hundreds of farmers and business owners sued the Army Corps for creating more wildlife habitat along the Lower Missouri, saying it worsened flooding. And property rights activists have opposed federal plans to expand the Big Muddy National Wildlife Refuge from 16,600 to 60,000 acres by purchasing more land from willing sellers.

Still, there are signs of changing attitudes. Republican senators from Iowa, Kansas, Missouri and Nebraska introduced legislation in March that calls for the Army Corps to use “both structural and nonstructural measures” to reduce flooding on the Missouri.

In Atchison County, several farmland owners are negotiating to sell more than 500 acres to move back portions of a levee on the Missouri River.

“I’d much rather be farming it, but I’ve come to the realization that it’s not going to happen,” said tenant farmer Phil Graves, who grew corn and soybeans on land now smeared with up to four feet of sandy silt from last year’s flooding.

If completed, the project could set an example for other flood-prone counties along the Missouri, said Dru Buntin, deputy director of the state Department of Natural Resources.

Already, said Buntin, “you have landowners themselves talking about how this approach benefited them, as opposed to state or federal agencies trying to convince them.”

After last year’s flooding, nearly 750 farmers in a dozen heartland states volunteered for a federal program that pays to take property out of production and restore natural features. Federal disaster legislation provided an extra $217.5 million for conservation easements in 13 hard-hit states.

“We don’t have anywhere near the funding we’d need” to accept all who want to participate, said Jon Hubbert of the Natural Resources Conservation Service office in Des Moines, Iowa.