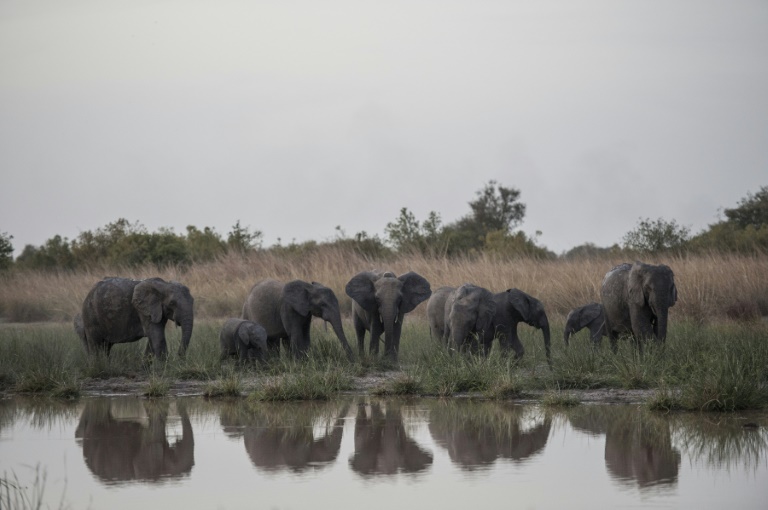 A herd of elephants feed around the waterhole in late afternoon at Pendjari National Park in Benin January 10, 2018 (Photo: AFP)

Their eyes and the sensitive, soft tissue inside their trunks are particularly vulnerable to painful stings, and experts believe African elephants(Loxodonta africana) have learned over the centuries to recognize the scents bees give off when they are scared and ready to swarm.

Now, researchers say this well-honed fear of bees could be used to help repel the majestic beasts in places where they risk conflicts with humans.

In a three-month field test at South Africa's Greater Kruger National Park, scientists hung white socks filled with bee pheromones, which are chemical clues that honeybees release from their bodies when they perceive a threat to their hive.

A total of 25 of 29 elephants that approached the "showed typical signs of increased alertness, signs of uncertainty, and finally calmly moved away," said the report in the journal Current Biology.

To make sure it wasn't simply the socks but the odor emanating from them, researchers hung similar socks that did not contain the pheromones, and found that elephants were curious about the socks, would pick them up and even taste them at times.

Since some farmers in Africa already place commercial bee hives along their fence lines to protect their crops from elephants, the results suggest there may be a cheaper way to ward off conflicts.

"Our results complement previous studies that have demonstrated that active bee hives can deter elephants from crops for example but may be difficult to implement on a large scale," said lead author Mark Wright, a professor of entomology at the Department of Plant and Environmental Protection Sciences at the University of Hawaii at Manoa.

"We hope to expand this work to develop additional tools for sustainable passive management of elephant movements, to augment the current approaches used."