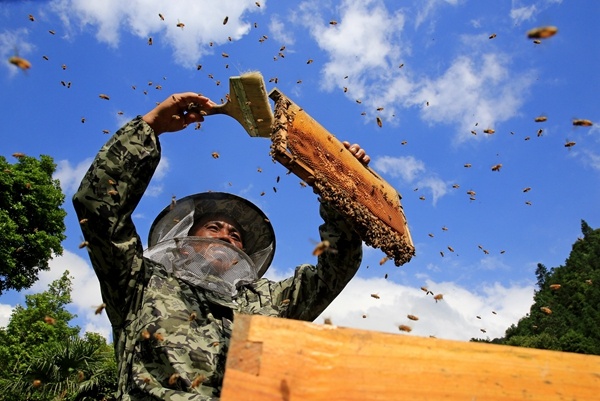 The time has come for bees to collect nectar from blooming vegetation in the lush mountains of East China's Fujian province, and Zheng Quanfu, a local beekeeper, is all set to work his "magic" once again.

Zheng was a small farmer in Yangkeng village of Shunchang county only five years ago, but a training session at Fujian Agriculture and Forestry University in 2015 transformed his life.

During the session, he learned advanced techniques to improve the survival rate of bees and the quality of honey.

Thanks to such techniques, Zheng's beehives have grown from one to 500, earning the lean, sharp-eyed beekeeper a new nickname, "magician".

Before the training, his life hit rock bottom when the only breadwinner of the family was left bedridden after a car accident in 2014. "I couldn't even borrow 100 yuan ($14), because no one had faith in my ability to repay," he recalls that hard time.

With two young sons to feed and sick family members to attend to, Zheng had to find a way out. He pinned all his hopes on bee breeding.

Zheng used to keep bees using local methods. He collected cymbidium from a nearby mountain around April to attract the bees. After luring the buzzing creatures into beehives with molasses, he carried the bees back home to breed.

Although the mountain is blessed with dense woods and abundant nectar sources, his amateur methods failed to attract enough bees.

Determined to make a living by beekeeping, Zheng joined a local cooperative, which provided him with cymbidium sprouts and assistance in planting, bee breeding and honey production.

The cooperative even enrolled him in a 20-day training session at the College of Bee Science of the Fujian Agriculture and Forestry University in late 2015.

He remembers vividly how a teacher explained the division of labor in a honey bee colony with stuffed toys. The toy with a mobile phone represented bees in charge of messaging and the one with a basket represented those collecting pollen from plants.

"It's like a dream come true that I could someday attend classes and actually learn something in a university," Zheng says, who used to watch this kind of training program on television.

He now owns 500 beehives and 100 pots of cymbidium. His family moved out of their old mud house into a new brick one in 2016.

He raked in 200,000 yuan from selling 2 metric tons of honey in 2018. His business was hit by an unexpected flood last year, but he still managed to earn money by selling some of his beehives.

Now he has another mission, to help his fellow villagers. He has been working with the local poverty relief office for three years, offering guidance to other impoverished households on beekeeping.

Every day he rides two hours on his motorbike to give classes. Lecturing in the morning and working in the field in the afternoon with his "students" has become a routine.

He earns 400 yuan from one lesson but he says he is willing to impart his expertise to villagers whether he is paid or not.

Huang Qisheng, one of Zheng's students, has been learning beekeeping for almost four years. He cast off poverty over that period, and now owns more than 30 beehives.

"I want to keep learning with Zheng. Beekeeping is a lasting career for me now," Huang says.

The local government, in the meantime, is applying for a certification for the locally produced honey, hoping to boost the industry by improving production and establishing a sales platform.

Zheng expects to have 1,000 beehives this year. He himself has also set up a beekeeping cooperative and is persuading more villagers to join him.

If all goes well with the April nectar flow, Zheng will be collecting honey from honeycombs in May while expecting the second flow in early June.