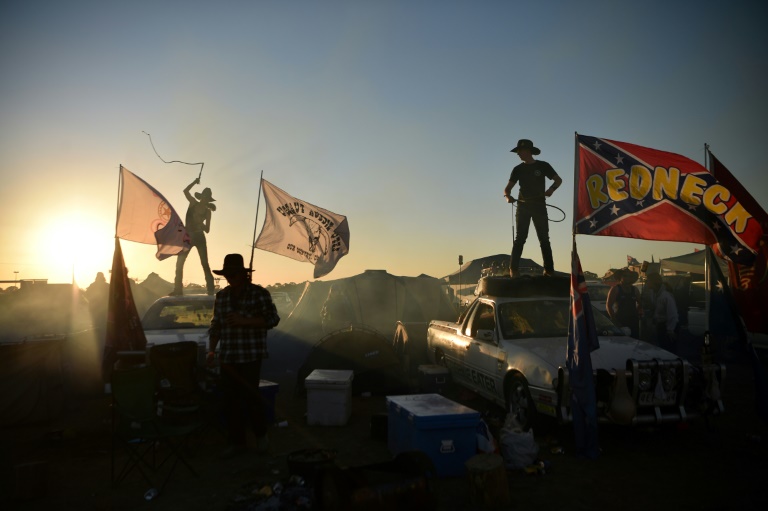 The Deni Ute Muster festival draws some 20,000 revellers and 6,000 utility vehicles -- known as utes -- from across Australia to the small town of Deniliquin (Photo: AFP)

Thousands of revellers have flocked to the rural Australian town of Deniliquin in a rowdy celebration of their love of utility vehicles and the outback, with whip-cracking and bull-riding contests among the highlights.

The Deni Ute Muster, which celebrated its 20th anniversary this weekend, is the biggest festival of its kind in the world.

It draws some 20,000 revellers and 6,000 utility vehicles -- known locally as utes -- from across the vast continent to the small town of Deniliquin around 700 kilometres (450 miles) southwest of Sydney.

"It's a gathering of utes, an iconic event that celebrates lots of rural Australia," the festival's general manager Vicky Lowry told AFP.

The two-day event has outlasted other festivals held in Australia by embracing the nation's rural heritage, including the ubiquitous ute commonly used on farms.

First built in Australia in the 1930s by the Ford Motor Company, the ute was believed to have been designed to specifically cater to local farming families, and has since become a symbol of the country's outback culture.

Other highlights include so-called circlework competitions -- where utes drive around a dirt track doing a variation of donuts -- kicking up dust as thousands of spectators cheer them on.

But the main highlight remains the ute paddock, where Australians young and old party late into the night in front of large bonfires, setting up tents or swags -- a rolled-up tent -- beside their vehicles.

At the paddock, jumping on top of your ute to crack a whip or down a bottle of beer is a common occurrence, as is the blasting of country music.

"Well we come here with the boys... just come to get away from work and get drunk," Lochie Donovan, 20, told AFP before jumping on the hood of a ute to empty a can of beer.

The event is also a chance for rural Australians, who often live hundreds of kilometres from the nearest town, to make new friends.

"It's my first time, it's been on my bucket list. I just wanted to come for a bit of a perv on the fellas. Cowboys are good," Debbie-Jane Cornford, 42, who was attending her first ute muster, told AFP.