WASHINGTON, Nov. 13 (Xinhua) -- It is time to say goodbye. A week-long farewell party is now underway for the U.S.-born male giant panda Bei Bei, who is to depart from the Smithsonian's National Zoo here to China later this month. 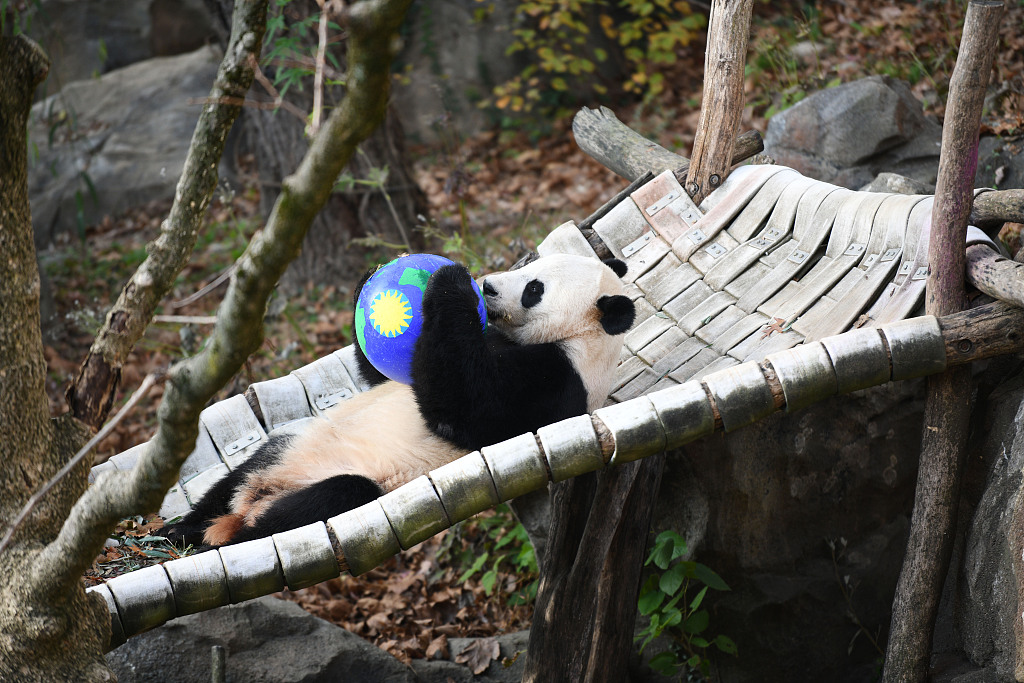 While it highlights Bei Bei and his days in the United States, the party aims to wish him the best for starting a new chapter in his life in China, epitomizing an enduring China-U.S. friendship and fruitful collaboration.

Bei Bei's departure, scheduled for Nov. 19, is in line with the terms of the agreement between the U.S. national zoo and China Wildlife Conservation Association that requires all cubs born there be moved back to China after their fourth birthday. Bei Bei turned four on Aug. 22.

An online and on-site series of "Bye Bye, Bei Bei" celebratory events were running from Monday through next week, allowing giant panda lovers to bid farewell to Bei Bei before he leaves.

Eight-year-old Lorelei and her six-year-old sister Nicolette, while visiting the zoo with their parents, told Xinhua that they are here to say goodbye to Bei Bei and want to wish him "an amazing flight" back to China.

When asked if they would like to go to China to see him someday, "Yeah. Definitely," they said.

The name of Bei Bei, which is complementary to his older sister's name Bao Bao, means "precious treasure" in Mandarin. He wandered around his habitat as usual on Wednesday before lying down to chew bamboo and showcasing his rolling skills and playfulness.

"He's got a really good personality. He's fun," said Laurie Thompson, assistant curator at the David M. Rubenstein Family Giant Panda Habitat, who has been taking care of Bei Bei since it was born in 2015.

"He likes to roll around, do somersaults in his yard. He likes to climb trees. He likes to just put on a show for the crowd. He's just a really nice bear," she said.

"Giant pandas here at the national zoo are celebrities. They are rock stars," Annalisa Meyer, a spokesperson for the zoo, told Xinhua. "We have a lot of people who are going to be coming to wish Bei Bei a fond farewell."

Some people may worry that the 240-pound, black-and-white fur ball would be uncomfortable living apart from his parents. But according to scientists, giant pandas are solitary in the wild, and cubs typically separate from their mothers between 18 months and two years old. Bei Bei has been living separately from Mei Xiang since March 2017 and he will become more territorial as he gets older, which is normal for a young male bear.

PREPARED FOR A TRIP

Preparations for Bei Bei's journey started last month, which included acclimating him to a specially designed travel crate, according to Thompson.

The white, see-through crate, measuring 55 inches (139.7 cm) wide by 75 inches (190.5 cm) long and 50 inches (127 cm) tall, has been placed in Bei Bei's habitat, where his keepers ask him to walk through it every day and then gradually spend short periods of time in it with the door closed.

Thompson said Bei Bei is "doing very good" with the crate. "The first time you saw he was a little nervous, but now he goes in there and sits down and eats and seems very happy," she added.

When departing for China next Tuesday, Bei Bei will be accompanied by Thompson and the zoo's chief veterinarian, Dr. Don Neiffer, on a non-stop flight to Chengdu, China. He will be on a dedicated B777 aircraft by FedEx, with a supply of his favorite treats, including bamboo, apples, pears, carrots, cooked sweet potatoes, biscuits and water, and his toys.

Thompson said she hopes that Bei Bei could do well like his siblings when on the plane, being fine with "eating and sleeping in the crate and just relaxing for his trip."

Upon arrival in Chengdu, Bei Bei's new keepers will accompany him to one of the bases operated by the China Conservation and Research Center for the Giant Panda. Thompson will stay with Bei Bei for a short period of time to help him settle in.

Thompson said she believes Bei Bei will be fine in his new home but has to get over the time difference first, while stressing that "language" wouldn't be an issue for the giant panda, who has been living in an English-speaking environment since his birth.

"He's very good at coming when you call his name," the assistant curator said. "As far as the training, a lot of the hand signals are universal. So, he will learn them very quickly and he will learn who the people are that will give him food. So, he'll be fine."

The zoo's chief veterinarian Neiffer, who conducted the last visual health check for Bei Bei on Wednesday before his departure, told Xinhua that the giant panda is "very healthy" and "in good shape for his upcoming trip."

Bei Bei will enter the breeding program when he reaches sexual maturity between 5 and 7 years old, and the giant panda will have ample time to adjust to his new home before experiencing his first breeding season, according to the zoo.

The U.S. national zoo, part of the world-renowned museum and research complex Smithsonian Institution, received its first pair of giant pandas, Ling Ling and Hsing Hsing, in 1972, bestowed by the Chinese government as a gift to commemorate the groundbreaking progress in their relations that year.

"It was a very important symbol. It was an opening and it was a way to increase awareness and understanding between our two countries," Steven Monfort, director of the Smithsonian's National Zoo and Conservation Biology Institute, told Xinhua on Wednesday. "I can't think of any other animal, any other wildlife species that has had such an important diplomatic position."

The presence of giant pandas has drawn millions of fans to the zoo from across the United States and beyond. More importantly, it has given the institute an unparalleled opportunity to study and preserve the species, together with Chinese scientists, so as to help them better survive and ultimately thrive.

"It's a very extensive scientific collaboration that is everything from studying the individual animal and their health and their wellbeing all the way to understanding the ecosystems that they live in, the reserves where they live and training the next generation of professionals (who) will care for them and study them long into the future," Monfort said. "It's something that we are very proud of."

The latest census in 2014 found there were 1,864 giant pandas alive in the wild, up from 1,114 decades ago. The number of pandas bred in captivity reached 548 globally as of last November, according to China's National Forestry and Grassland Administration.

Monfort said the population structure is very healthy, which means there will be giant pandas available to be reintroduced to the wild.

Monfort agreed that it is imperative for the U.S. and Chinese sides to continue their productive relationship for a greater success in preserving giant pandas.

"Success means that we will have multiple free living populations that are sustaining and sustainable in terms of their reproduction and their health," the zoo chief said. "We still have a long way to go before we achieve that goal. But the trends are moving in the right direction."

"We are very interested in continuing this great relationship. We've been 47 years working together on giant pandas and we hope that we can work for another 50 years or more," he added.