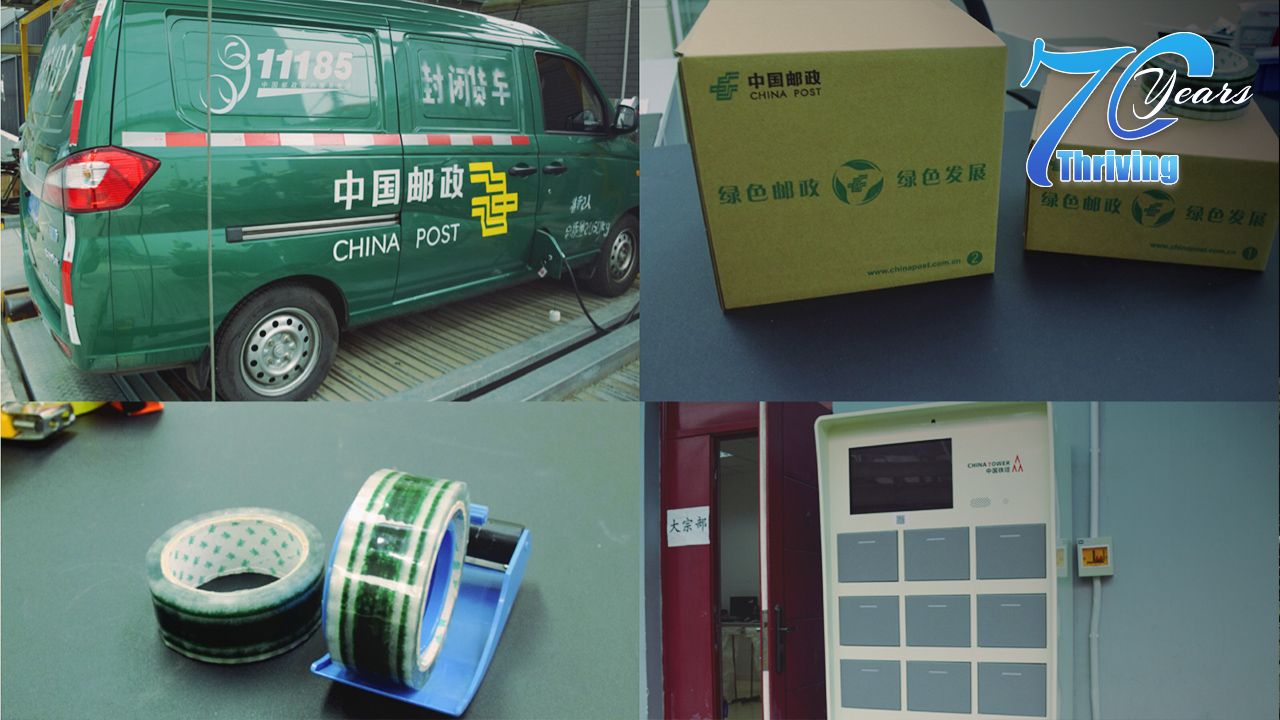 The China Post Group Corporation, China's state-run postal service provider, has launched a "green post" initiative in May 2018 as a response to the country's green development concepts, to make its services more environmentally friendly and build a more efficient, sustainable and responsible brand image.

The Beijing Dongsi Post Office is a historic branch of China Post in the heart of China's capital – it has been operating for over 100 years. One year after the launch of the initiative, it practices the "green post" concepts in nearly every aspect of its daily work. Here is what the branch does to make its services greener.

With the rapid development of e-commerce in China, the number of delivery vehicles has seen a dramatic rise. E-bikes, which are since recognized as the most iconic delivery vehicle, have brought not only many conveniences to the delivering process but also thrown urban traffic into some chaos.

To save energy and regulate urban traffic, an even more environmentally friendly vehicle, the new energy vehicle, has been put into use in most of China Post's branches.

According to Li Guohua, general manager of China Post, the company aims to ensure all its new delivery vehicles are new energy vehicles by 2020 to make its services greener.

The new energy e-bikes and cars entirely run on electricity. They can be charged through an off-vehicle charging device installed at the post office. Also, the electric vehicle is designed in a smaller size than gasoline-powered vehicles.

"A smaller vehicle saves energy and can easily pass through the narrow streets in the city, such as the traditional Beijing Hutongs," Huo Yan, vice director of the Beijing Dongsi Post Office, told CGTN.

"Now, we have two new energy vehicles at the Beijing Dongsi Post Office," said Huo, "and more of such vehicles will be put into use in the future and completely replace the gasoline-fueled vehicles in every post office."

Meanwhile, new energy vehicles cost less than gasoline-fueled cars. For the same distance, the cost of new energy cars only takes up one-fourth of that of petrol-driven cars, said Huo.

The thriving delivery industry in China has also led to the mass consumption of resources and caused irreversible damage to the environment.

According to the data released by China Post, a total of 19.2 billion paper boxes, 5.8 billion woven bags, 15 billion plastic bags and 30 billion meters of plastic tapes had been consumed by the country's delivery industry in 2017. China's express delivery business volume has ranked No.1 in the world for four consecutive years.

To reduce the plastic pollution and increase the recycling of packages, China Post has launched regulations as part of the "green post" initiative to ensure that over 90 percent of its waybills are digitalized and more than half of its packaging materials are biodegradable by 2020.

"The weight of each type of box has been reduced by 20 percent, while the size remains the same,” Huo said," And the width of plastic tapes has also been narrowed."

Huo also presented a specially designed recycling paper box, which has double-sided tapes attached to the inner side of the box. "This type of paper box doesn't need any extra plastic tapes to seal it, and it greatly reduces the unnecessary use of plastic tapes," said Huo.

Due to the high recycling rate of the new packaging, the cost of it is 30 percent lower than that of the traditional paper boxes, Huo said.

"Green has always been a symbolic color of China Post as all of our signs, logos and symbols are in green. But now,  green has been given another level of meaning, which implies eco-environmental protection," Huo said, adding that the "green post" initiative is set to ensure a more efficient, sustainable development pattern.