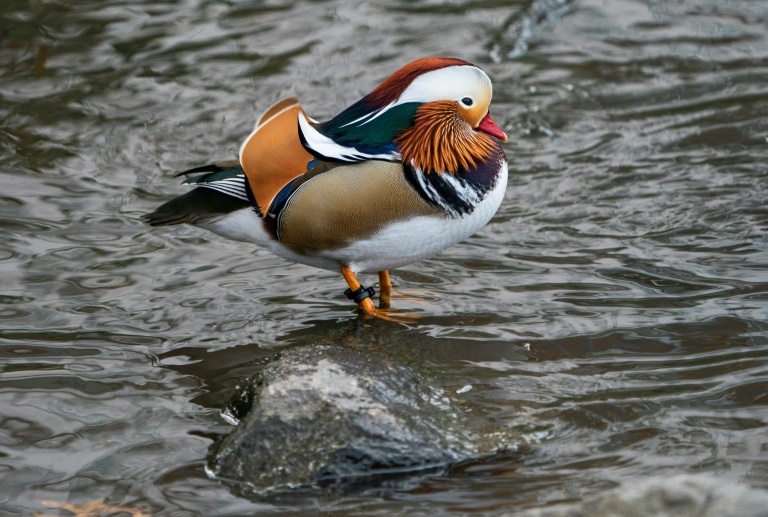 A Mandarin duck nicknamed Mandarin Patinkin has made a big splash for bird watchers and the general public at New York's Central Park. (Photo: AFP)

BEIJING, Feb. 14 (Xinhua) -- Mandarin ducks playing in water were usually featured as a symbol of love in traditional Chinese poems and artworks, but now they have become frequent scenes in many Beijing parks this winter, delighting the city's bird lovers.

"More and more mandarin ducks have been spotted in urban Beijing in recent years," said Shi Yang, a researcher with the Beijing Wildlife Rescue and Rehabilitation Center.

A team of over 60 experts and volunteers led by Shi is working on a survey of mandarin ducks, to determine the species' population and breeding grounds in urban Beijing.

"The survey's goal is to discover the reason behind the frequent appearances. The more we know, the better protection we can offer," Shi said.

Photographing the ducks has soon gained traction in Beijing as more people want to catch a glimpse of the brightly colored water birds that are rarely seen during northern China's winter.

The water birds, native to East Asia, have exquisite coloring. The male duck has a reddish face and purple breast, with white, orange and emerald green feathers. The female is less colorful, with a gray head, a brown back and a white eye stripe.

From 2006 to 2008, a Chinese environmental NGO conducted a study which estimated there were more than 1,500 mandarin ducks in Beijing from February to October. Breeding sites included reservoirs in suburbs and imperial gardens in urban areas, such as the Summer Palace.

Although there is no recent official data, ornithologists think the number has declined because their breeding sites have been greatly reduced.

Unlike many other duck species, the mandarin ducks mainly choose to breed in tree holes of poplars and willows close to water. Some of these tree holes are formed by insects, and some by the corrosion of broken branches.

However, trees with such holes, particularly in imperial gardens, have been cut for sightseeing and visitor safety, which may make it difficult for ducks to hide and sleep, Shi said.

More ducks showing up may be a good sign, but Shi is very cautious to predict the population. The first survey activity in late January showed that only 540 mandarin ducks were found in 10 sites in urban Beijing, much fewer than he had expected.

"Climate and environment changes are affecting the duck's habits," said Shi. He and other researchers have discovered that the populations in Beijing are not only migratory but also resident, breeding and overwintering in the city.

Even though the population is growing, it's hard to say if that's due to an improving local environment or problems with their wintering grounds, said Shi.

"We don't have data to support that theory," Shi added, "because the investigation would be long and laborious."

Volunteers are trained to administer the survey and learn to use a telescope and camera to record. According to Shi, most volunteer surveyors are teenagers and their parents.

Zhang Zhecai, 44, loves watching birds and has volunteered to do many bird surveys with his son since 2017. He was impressed by the "interesting details" during the survey, such as ducks dating, fighting and breeding.

"I think participating in the bird studies is also a personal contribution to wildlife protection," Zhang said.

"To better protect the ducks, we hope people do not lure them close with food for a good picture, and that the city could preserve more tree holes," said Shi.