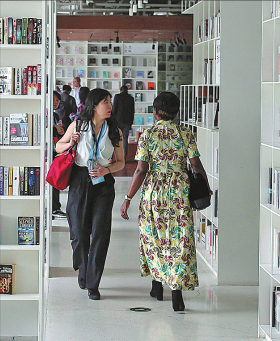 The second Belt and Road Forum for International Cooperation, taking place from Thursday to Saturday, is giving Beijing the chance to show off its longtime efforts in preserving cultural heritage, developing the creative industry and promoting cultural exports.

More than 450 journalists from the countries and regions involved the Belt and Road Initiative, including nearly 400 from abroad, were invited by the Press Center of the forum and the Beijing Information Office to join in a three-day city tour that started on Tuesday.

According to local officials, foreign journalists learned more about the ancient capital's history, traditional Chinese culture and the creative industry's efforts to combine a modern lifestyle with Oriental elements on a visit to the Museum of Confucius Temple and Guozijian, or the Imperial College, as well as the 77 Creative Park on the first day of the tour.

"This is my first trip to Beijing," said Alex from Chile. "Beijing's Confucius Temple and the Imperial College are what I most look forward to visiting."

"My house in Santiago is close to a Confucius Institute and many of my friends are learning Chinese so I've become very interested in traditional Chinese culture."

The Confucius Temple and the Imperial College, showcasing Chinese people's respect and thirst for knowledge, served as a bridge between ancient China and the outside world.

Many journalists were amazed to learn that since the Ming Dynasty (1368-1644), the Imperial College had been recruiting students from other countries including Japan, Vietnam, Thailand and Russia.

The Qing Dynasty (1644-1911) government even set up a special school to teach students from Russia.

The media delegation also watched Dacheng Etiquette. The ritual performance is the same as the ancient one, thanks to Beijing's sustained campaign for culture preservation and innovation.

When the ritual was over, they said that they appreciated the profound culture and Confucian thoughts.

Last year, the city government issued a framework plan for the protection and utilization of old factories to expand space for cultural development and the local creative industry.

Located inside the compound of the Imperial College, 77 Creative Park is an exemplary case of the drive.

The creative park, which used to be the Beijing Printing Factory, the structure of which still remains, has attracted many startup businesses engaged in the creative industry.

In the yard of 77 Creative Park, many esteemed artists and craftsmen from Beijing now demonstrate their skills in paper-cutting, lacquerware carving, seal cutting and monkey toy making to the visitors.

Some of the audience said they admired Beijing's efforts in not only protecting handicraft techniques but also bringing them closer to people's lives.

On the final day of the city tour, journalists visited the Beijing Tianzhu Free Trade Zone and two major areas in it - the National Base for International Cultural Trade (Beijing) and the Cross-border E-commerce Direct Mail Station of Beijing Capital International Airport.

For example, it is implementing the value-added tax "exemption, offset and refund" policy for aero engine maintenance. The policy can avoid double tax payments worth about 3.1 million yuan ($461,370) for maintenance of an engine and reduce about 200,000 yuan in logistics cost and around 15 days in logistics time, local officials said.

The National Base for International Cultural Trade (Beijing) was created to advance the Belt and Road Initiative and Beijing's goal to become a national cultural center, they said.

"It is providing services in such areas as exhibition and experience, communication and promotion, transaction settlement, startup incubation and cultivation, financing and investment, and warehousing and logistics," they noted.

There are three marketing centers in operation and more than 20 companies settled at a cross-border e-commerce industrial park within the FTZ. Several commodity halls for Germany, Australia, Argentina, the United States and other countries also can be seen in the FTZ.