CULTURE Beijing to step up protection of old districts, buildings

Beijing to step up protection of old districts, buildings 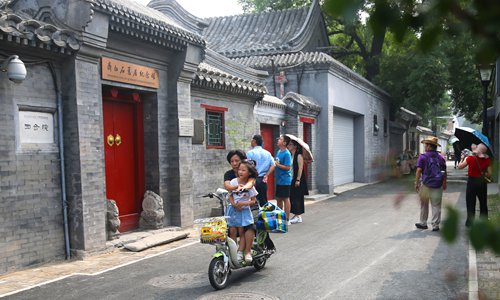 A hutong in Beijing. (Photo: IC)

Beijing will reinforce the preservation of old urban districts as the city authority released on Monday a draft plan on the capital's core functioning areas in the 2018-2035 period, according to a notice released on the city government's website.

The city government is soliciting public opinions over the regulations from December 30 to January 28.

According to the draft plan, streets featuring historic and cultural buildings occupy at least 26 percent of the capital's core functioning area and 34 percent of the old city area.

Li Zhirong, an associated professor with the Cultural Heritage Institute at Zhejiang University, told the Global Times that she applauds the decision of stopping the demolition of Beijing's old city, even though it is considered late.

"Protecting Beijing's old city area is preserving information regarding the history of China's civilization in the age of globalization," said Li.

Now that the country attaches great importance to cultural heritage protection and makes it a way to enhance the country's cultural confidence, old city protection is not something easy to achieve, which requires thorough investigations, research and recollection, as well as handling complicated property ownerships, Li added.

To effectively preserve traces of the past, the city government will first conduct a category census on historic and cultural resources as well as historic streets and areas.