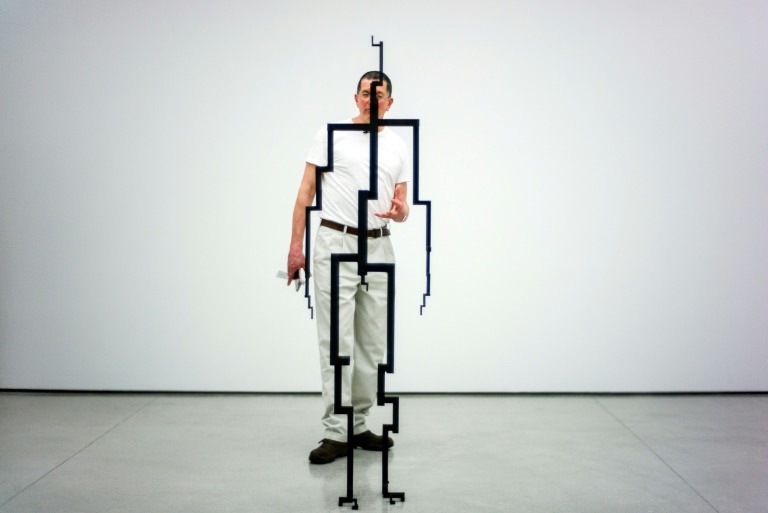 Antony Gormley stands next to 'SIGNAL (2017)' at his exhibition 'Rooting the Synapse' in Hong Kong (Photo: AFP)

Some of the figures seem to be concentrating on yoga poses. One is standing on its head, another lies down with its upper back and legs lifted, its "core" apparently hard at work.

Antony Gormley's new creations, a series entitled "Rooting the Synapse" unveiled in Hong Kong this week, are as always modelled on his own form -- but this time with jagged limbs branching out like plants, spindly and skeletal.

Arguably the UK's best known modern sculptor, Gormley has spent his career exploring the human body’s relationship to space, with his "Angel of the North", a steel, winged behemoth installed on a hill in northeastern England in 1998, catapulting him to fame.

His shadowy human figures loomed from the top of Hong Kong's skyscrapers between 2015 and 2016 as part of his "Event Horizon" show, causing curiosity and consternation in the streets below, where some feared they were people about to jump to their deaths.

Gormley, 67, insists his figures contain no narratives and are not trying to tell a story, but exist to stir up feelings in viewers.

"Your body is actually the most highly sensitive instrument that you have in order to experience the world," he told AFP.

Many have seen or even inspected up close the cast iron and fibreglass versions of his body that he has sculpted over the years.

In person, he is tall and serene, his eyes alert as he chooses his words deliberately.

While Gormley has in the past displayed his figures on beaches and in vast salt lakes as well as across dense cities, his latest sculptures are debuting within the stark white walls of Hong Kong's White Cube gallery, inviting viewers to feel for a moment removed from the urban frenzy outside.

The twig-like bodies are sculpted from iron and partly draw on the patterns of ancient civilisations, such as the spiralling, angular motifs that the Greeks used in architecture and pottery.

But they are also reminiscent of electrical circuits -- Gormley compares them with TV aerials, or "receivers of the signals of contemporary reality".

Observing that people spend more and more time surrounded by screens and are taken to gyms to exercise "like they're a dog", Gormley says his latest works are supposed to look "familiar and unfamiliar at the same time" as they combine elements from both the natural and digital worlds.

"In a way I'm saying this is human being now," he says.

As VIP collectors, gallerists and glamorous art enthusiasts flocked to Monday's preview of the show, which coincides with the city's edition of art fair Art Basel, Gormley spoke of his wish to depart from a tradition of sculptors who pursued beauty and ideals.

He said he is interested in making what he calls "a plea for the life that exists independent of the accidents of appearance".

Movement is more evident in his latest series -- some of the new figures appear relaxed, or are caught in a moment of imbalance.

One is bent over sharply, allowing its torso to droop under its natural weight. Another seems to be in free fall, its limbs splaying.

Gormley says these figures are "more open and more free" than his previous sculptures, which sought to connect with people through their silence and stillness.

The southern Chinese city provides a vibrant setting for his show, he adds, casting the exhibition as a response to the heavily designed and dense urban environment.

Decades into his life as an artist and devoted to a single theme, he describes his work as a stem, constantly budding with new possibilities.

While in Shanghai, where he had an exhibition last year, he found inspiration in watching people do tai chi in the morning -- a relatively slow and gentle exercise -- where they were not necessarily working but "just getting their bodies back into a kind of balance".

He tries to achieve something similar in art.

"My work is my meditation," Gormley said.