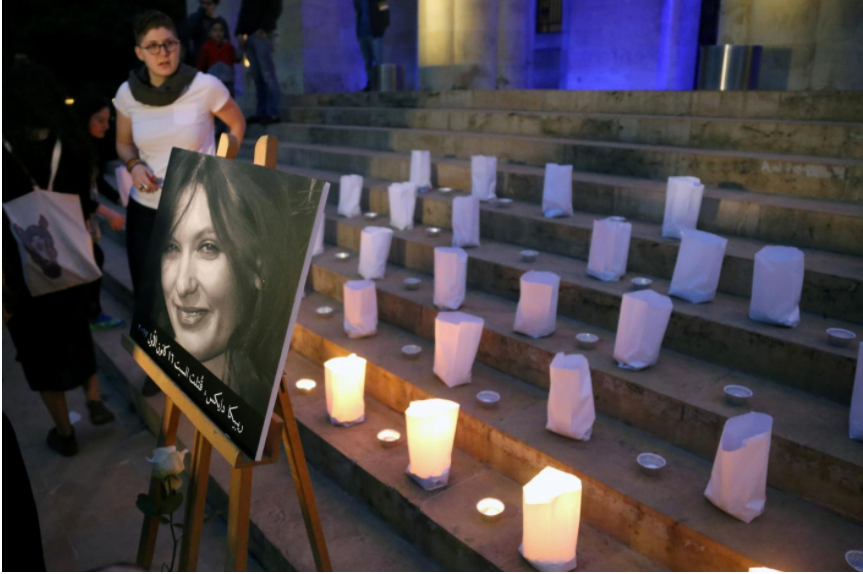 Dozens of people gathered outside Beirut’s national museum on Saturday evening to light candles for a British woman and three Arab women murdered in the past week in Lebanon.

The killing of the British embassy worker Rebecca Dykes last week has sparked extensive media coverage in Lebanon, prompting activists to press for more attention to be given to widespread violence against women.

Lebanese women’s rights activists held the vigil to mourn the victims, demand better laws, and to protest against the violence - including the three reported murders in northern Lebanon alone over the past week.

“Society refuses to listen to us or see us until our blood is spilled,” Leen Hashem, an organizer, told the crowd from the steps of the museum. “This violence is structural and systematic.”

“Justice is not only arresting the criminal. Justice is for all this not to happen to us in the first place,” she said.

“Don’t tell me to cover up. Tell him not to rape me,” one woman chanted through a megaphone, a demand repeated by people in the crowd.

Participants laid white roses over pictures of the four women, and lined the steps with candles.

Wafaa al-Kabbout stood on the sidelines, holding a framed photo of her 21-year-old daughter Zahraa, whose ex-husband shot her dead last year. “Now my daughter is gone, she’s not coming back,” she said. “But all these young women are our daughters. And there is still fear for the young women after them.”

The United Nations says a third of women worldwide have suffered sexual or physical violence.

A 2017 national study by the Beirut-based women’s rights group ABAAD said that one in four women have been raped in Lebanon. Less than a quarter of women who faced sexual assault reported it, the survey said. 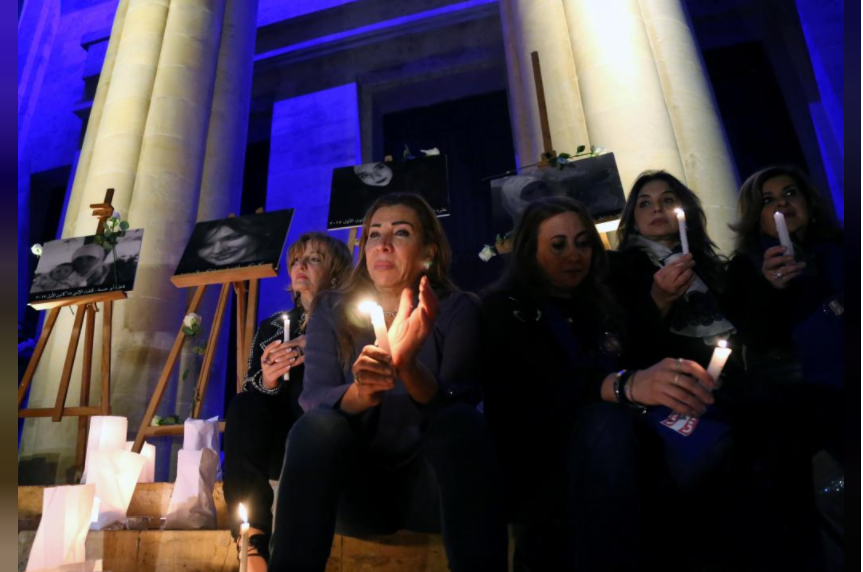 “Little by little, we are breaking the silence ... for women to come forward and talk about the violence they are facing,” said Saja Michael, program manager at ABAAD.

In the past five years, women have become more likely to report violence and seek help, she said, though sexual assault remains a bit more taboo. Part of the reason is that NGOs have set up new shelters and community centers, with psychological, legal, medical, and other services, Michael added.

Lebanon’s parliament passed a long-awaited law in 2014 that penalized domestic violence for the first time. But rights groups were outraged that authorities watered it down, and it fell short of criminalizing marital rape.

Child marriage also remains legal in Lebanon. In August, parliament abolished a law that absolved rapists if they married their victims, joining other Arab states that repealed similar laws this year. Activists welcomed it as a major step, but said there was a long way to go on Lebanese legislation to protect women.

“Every day we are subjected to harassment, in college, on the street, everywhere,” said Ramona Abdallah, a university student at the vigil. “It really could be any one of us.”

Rebecca Dykes, 30, who worked at the British embassy in Lebanon, was found strangled beside a highway outside Beirut last weekend. A Lebanese Uber driver picked her up before assaulting and killing her, state media said. A security official said the suspect had confessed.

Earlier in the same week, a Lebanese man killed his mother-in-law and wounded his wife by shooting them inside their home in the northern Akkar region, state news agency NNA said. Authorities have arrested him, it said.

In another incident, Nazira al-Tartousi, a 15-year-old pregnant Syrian, was found dead with a bullet in her neck in the north, security sources said. Her husband, the suspect, has denied killing her, they said.

And Yaman Darwish, 22, died after sustaining a broken chin and gunshot wounds in another northern village, the security sources said. The investigation showed the Lebanese woman had also been hit on the head with a vase, and choked.