CULTURE Belgian bluebells are too beautiful to see during pandemic

Belgian bluebells are too beautiful to see during pandemic 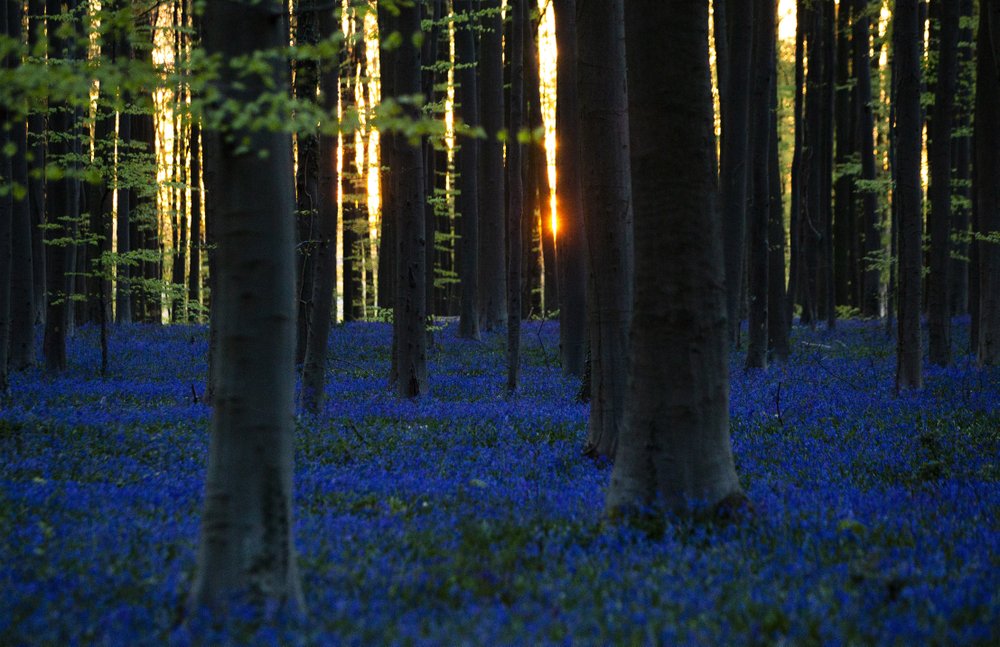 The sun begins to rise through trees as Bluebells, also known as wild Hyacinth, bloom in the Hallerbos forest in Halle, Belgium, on Thursday, April 16, 2020. Bluebells are particularly associated with ancient woodland where it can dominate the forest floor to produce carpets of violet–blue flowers. (Photo: AP)

When nature is at its brightest this year, it needs to be hidden from sight.

Parks and woods in Belgium, like in much of Europe, are a riot of color and scents in springtime, many so magnificent they would draw far too thick a crowd in the times of a pandemic.

So some are closed, or parking areas are off limits and non-locals are banned from visiting. Many tourists are sent back and some are even fined if they won’t take no for an answer.

The extraordinary measures are felt deeply as bluebells are in bloom in the Hallerbos forest, some 15 kilometers (10 miles) south of Brussels. In a good year, up to 100,000 tourists come to gaze in wonder at its vast purple carpet under the beech trees.

“This pains the heart badly,” Halle mayor Marc Snoeck told the Associated Press. “This goes against anything that we normally work for.”

During the annual April Bluebell Festival, the throngs on weekends or sunny days are so big that social distancing would become impossible along the walking paths. During their three-week stretch of flowering, the bluebells attract tourists from as far as China and the United States.

Now, a local can walk there, soaking in the morning scents almost alone at dawn, while in normal years photography fans would already be blocking the best views and cyclists whizzing by.

“Up to now, it has been pretty well respected,” he said of the measures, insisting the medical needs trump any other consideration.

The bad news for visitors is good news for the bluebells themselves. Ever more, they get trampled by tourists during the season, and many of them don’t recover for the next year. Now, the fragile flowers stay intact.

For Halle, the town of 30,000, though, it makes the coronavirus crisis even more painful as it is one of those festivals impossible to postpone. To rub it in, the weather has been unusually warm. The economic cost especially hits bars and restaurants, Snoeck said.

“There usually is a dip after Easter, so the festival was great timing. Now, we can’t do it,” van Volsem said.

There is one solace though, Snoeck said.

“We are 100 percent sure that the flowers will be back next year.”