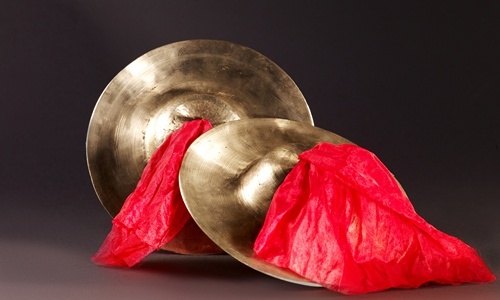 Chinese composer and conductor Tan Dun conducted the Belgian Antwerp Symphony Orchestra in a performance of his newest piece at Queen Elizabeth Hall in Belgium on Saturday to cheer on the people in Wuhan who are fighting against the novel coronavirus pneumonia and pay tribute to the people who have died due to the epidemic.

This is the first time that the international music industry has held a memorial concert for Wuhan, themed  "Love Mankind, Love the Earth, Love Wuhan."

Tan's piece is called "12 Sounds of Wuhan." He composed the song during his flight to Belgium. He told Chinese news outlet The Paper on Saturday that hearing about the deaths from the epidemic each day has made him very sad, and that he wanted to express his concerns and worries, and pay tribute to them as a musician.

The main musical instrument of the song is grand gong made in Wuhan. According to Tan, the Wuhan gong is a special musical symbol and so holds cultural significance in the music industry. Symphony orchestras from all over the world like to use it to perform classical music.

Zhang Liang, a shopkeeper who has run a musical instrument store in East China's Jiangxi Province for almost 40 years, told the Global Times on Sunday that the creation of gongs has been listed as one of the many items of China's intangible cultural heritage. The skills of most masters, the proportion of various metals used to make the alloy of the gong as well as the temperatures used in their creation all originated from Wuhan.

"I have had customers who know the history of the gong ask to buy Wuhan gongs, and I even have had some foreign customers place orders through Taobao," Zhang added.

According to Chinese traditional culture, "Twelve" represents the 12 two-hour periods that divide up the day and night and the 12 zodiac signs, which symbolize the harmonious coexistence of nature and humanity and the continuous regeneration of life.

Tan will hold another concert in the Netherlands for the "12 Sounds of Wuhan" and another song "Water Passion" to express his love for the Earth, nature and life, The Paper reported.