Benny Chan's final film aims to burn brightly in US 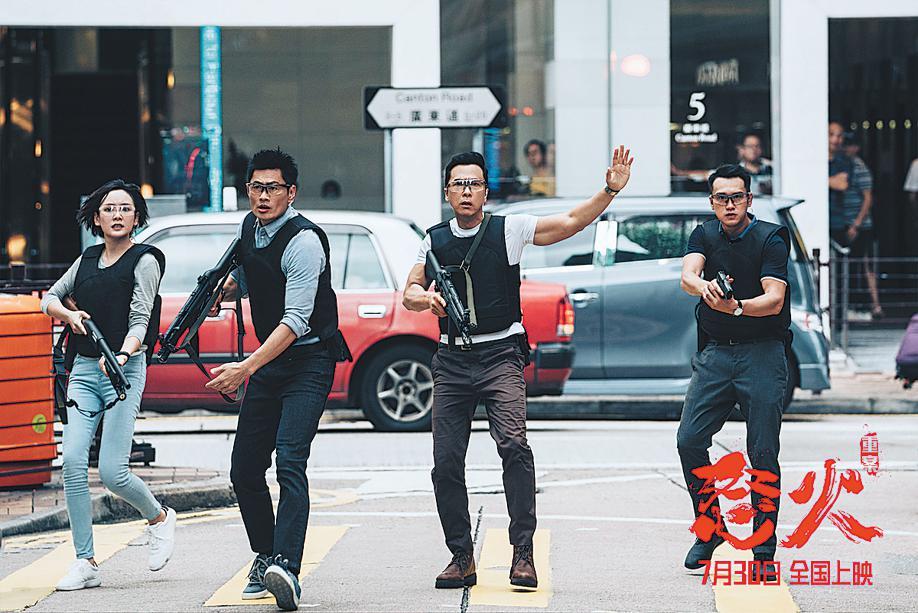 A poster features Donnie Yen (second from right) who plays a hard-line cop in the movie.[Photo provided to China Daily]

Helmed by late Hong Kong action film director Benny Chan, who died not long after completing production last year, the film stars Donnie Yen as a highly respected hard-line cop with a long history of success on dangerous cases. However, his past unexpectedly comes back to haunt him when a sting operation is attacked by a mysterious group of criminals led by his former protege, played by Nicholas Tse.

Yen, one of Hong Kong's top action stars, is renowned for his roles in such hit martial arts films as the Ip Man franchise.

Raging Fire is a box-office hit this summer in China, continuing to dominate Chinese box-office chart. Figures from the China Movie Data Information Network show that, as of Friday, the film had grossed 626 million yuan ($96.64 million) in its first 14 days of screenings.

The film has received positive feedback from Chinese moviegoers, with a rating of 9.5 points out of 10 on Chinese box-office tracker Maoyan.

"The exceptionally strong performance of Raging Fire in China is yet another testament to the wide appeal of this film, propelled by the star power of Donnie Yen and the inimitable vision and direction of the late Benny Chan," says Doris Pfardrescher, president and CEO at Well Go USA Entertainment.

"With theaters still taking precautions to provide a safe moviegoing experience, we do anticipate that North American audiences will be eager to see Donnie Yen and Nicholas Tse team up with Benny Chan one last time," Pfardrescher says.

The film attracted attention from movie critics as it prepared for release in North America.

"Raging Fire is an accomplished visual feat with detailed fight choreography and strong physical performances," comments film critic Anna Smith for deadline.com, noting that the film is "definitely for those more swayed by guns than gags, and by action than character."

"Hong Kong crime films reached a zenith in the '80s and '90s with the films of John Woo (Hard-Boiled, The Killer, A Better Tomorrow), Jackie Chan (Police Story), Johnnie To (The Mission) and Ringo Lam (City on Fire)," writes film critic Cary Darling for The Houston Chronicle, adding that Raging Fire is a throwback to those days.

"Although it sticks to the hardboiled blueprint of Hong Kong rogue cop actioners, director Benny Chan's final feature plays to the genre's strengths. There are precisely choreographed fist fights and crazy car and motorcycle chases sprinkled into a classic storyline," comments the president of the San Francisco Film Critics Circle, Randy Myers, for The Mercury News.

"Raging Fire isn't out to redefine the genre, but it serves up satisfying and energetic escapism along with a poignant reminder of all the stunning action scenes that Chan delivered over the years."

The film has received largely positive reviews with an approval rating of 88 percent based on 17 reviews to date on review-aggregation website Rotten Tomatoes.