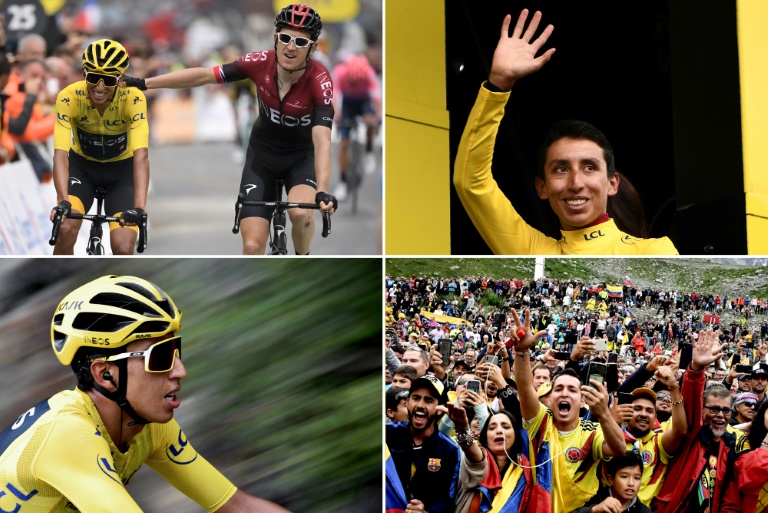 Just champion, Egan Bernal, his victory, his teammate and his fans. (Photo: AFP)

Egan Bernal will clinch victory in the Tour de France on Sunday as long as he avoids any last minute disaster on the parade into the Paris sunset to become the first Colombian winner of cycling's greatest prize and its youngest in more than a century.

The 22-year-old champion-in-waiting along with the other 155 men left after the gruelling three week 3,480 kilometre cycling odyssey will set off from Rambouillet on the largely ceremonial closing 21st stage at 1805 GMT.

Eight laps of the Champs-Elysees round off the iconic event with Bernal set to don the race winner's yellow jersey with the sun going down behind the Arc de Triomphe at around 1930.

Bernal said he appreciated he had finally added his name to the Tour de France roll of honour when outgoing champion and Ineos teammate Geraint Thomas held out his hand at the end of Saturday's stage.

"I realised it was over and I was going to win the Tour de France," said the man topping the 2019 general classifications for this anniversary edition celebrating 100 years of the yellow jersey.

On Saturday, Bernal and Thomas crossed the winning line a few seconds ahead of their key rivals and smiled broadly at each other as they held hands in unity to mark the moment.

Thomas, who will take second overall, believes this landmark triumph is the start of a golden future for his Ineos co-captain.

"I told Egan not to worry about the crying because all real men cry," said Thomas.

"He's an incredible talent and can dominate the race for years to come.

"It's a one-two for Ineos so things worked out not that bad. I'm disappointed not to have won, I didn't think last year Egan would be ready yet, but now I'm looking forward to a bit of downtime."

"Today is about Egan. He is a really solid guy with a great team and good people around him."

Bernal said he was so nervous on Saturday's climb to Val Thorens in the Alps that he counted down the kilometres on the way up.

"I still have to get to Paris but it's incredible," said Bernal who will become the Tour's youngest winner since Francois Faber in 1909.

"I'm a little calmer now. I kept thinking 5km, 4km, 3km one less, one less to go each time as we came up the mountain."

"To come away with first and second on the podium has been tremendously rewarding," Brailsford said. "Of course with a guy so young in Egan it has added an extra bit of enjoyment and a different element because all our previous wins have been with British riders."

At the start of Sunday's stage, Bernal led Thomas by 1min 11sec overall and Jumbo-Visma's Steven Kruijswijk by 1min 31sec.

When the riders gathered for the run into Paris, they were congratulated for having made this 2019 edition such a success.

"There have been some great races and a beautiful Tour de France," said race organising president Christian Prudhomme, who singled out the audacious attack-minded riders, with Frenchman Julian Alaphilippe top of that list, for individual praise for their contribution.

Alaphilippe, who led for 14 days, finished fifth overall after cracking on before cracking on Friday and Saturday's hail and landslide-curtailed stages.

"Tomorrow is Paris and one for the sprinters, so let's see, a win in Paris would be great," said the Slovak who is strongly placed to take sprinter's jersey for a record seventh time.

"It's been a beautiful Tour," he added.

Frenchman Romain Bardet redeemed what had looked like a disastrous three weeks for him by rallying to win the 'King of the Mountains' polka dot jersey with two fine performances in the Alps.