Bid to find a Valentine for Romeo, world's 'loneliest frog' 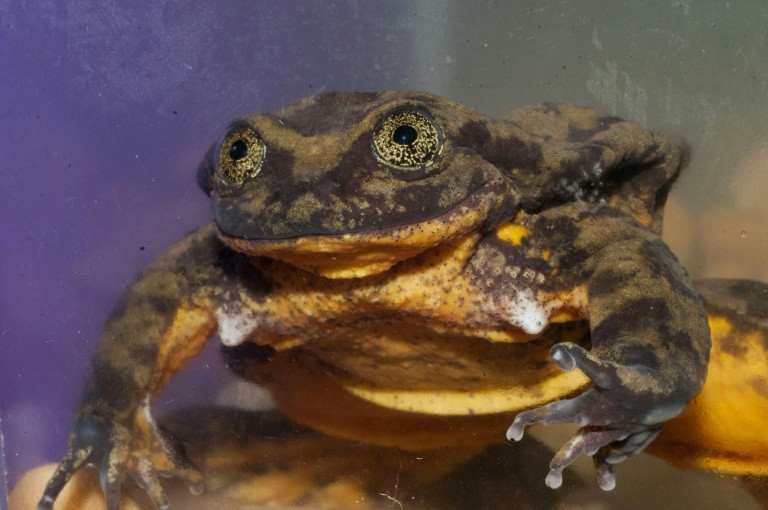 Looking for love: Romeo the Sehuencas water frog needs to find a Juliet to save his species

Ten years a bachelor, the childless amphibian has had to enlist human help to mount a last-ditch search for a Juliet which, if it fails, could mean the end of his species.

Romeo, you see, is the last known frog of his kind.

And he has been fruitlessly calling for a mate from his tank at the Cochabamba Natural History Museum for years.

"We don't want him to lose hope," said Arturo Munoz, a conservation scientist associated with the Global Wildlife Conservation, which has hooked up with dating website Match to raise money for Romeo's last shot at romance.

The funds will be used to scour Bolivian streams and rivers for signs of a female Sehuencas water frog, even in tadpole form.

"We continue to remain hopeful that others are out there so we can establish a conservation breeding programme to save this species," said Munoz.

If Romeo croaks, he could follow the route of "Lonesome George", a childless Galapagos tortoise who died in 2012, taking his entire subspecies with him.

Looking for my Juliet

He is introduced by a video in which he shows off a variety of swimming moves.

"I'm a pretty simple guy. I tend to keep to myself and love spending nights at home. I also love eating. then again, who doesn't?"

His mobile phone profile, also shown in the video, sports a big-eyed, pouting cartoon frog posing in a seductive manner, with the words: "Looking for my Juliet."

Romeo's relationship status is listed as: "Never married". Has kids? "No."

"I bet you're wondering what is a frog like me doing in a place like this?" the announcement continues.

"Well, I'm here to find my match, just like you. Except, my situation is a bit more... urgent."

'If you believe in love'

When Romeo was collected 10 years ago, said Munoz, "we knew the Sehuencas water frog, like other amphibians in Bolivia, was in trouble, but we had no idea we wouldn't be able to find a single other individual in all this time.

"Romeo started to call for a mate about a year after he was brought into captivity, but those calls have slowed in the last few years."

Compared to other frogs in the genus, Munoz told AFP, Romeo has an especially musical mating call, and has taught biologists much about his species.

It is a shy creature, usually hiding under rocks in his enclosure. It emerges only at feeding time, with earthworms and snails among its favourite snacks.

If they can raise enough money for travel and equipment, the team of scientists hopes to launch 10 expeditions to locations where the species was once common, as well as similar habitats, or places where nobody has looked before.

They will also scour streams and rivers for DNA evidence that the Sehuencas water frog may still be there, even if individuals cannot be tracked down.

If all else fails, Munoz does not rule out cloning as a means of preserving this amphibian species which, like many others, is threatened by climate change, habitat loss, alien predatory species introduced to rivers, and a fungus blamed for frog extinctions worldwide.

"So, if you believe in love and want to help an old frog out, please donate to my cause," Romeo's video concludes.