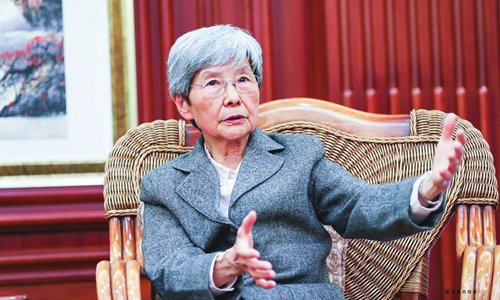 Fan Jinshi attends the release ceremony for her biography in Beijing on October 21. (Photo: Global Times)

A biography of Fan Jinshi, honorary director and fellow of the Dunhuang Academy, made its debut at a book release ceremony at Peking University in Beijing on October 21.

The book, Dunhuang Is Where My Heart Belongs: Biography of Fan Jinshi, explores Fan's personal life experiences and her relationship with one of China's famous World Cultural Heritage sites: the Mogao Grottoes in Dunhuang, Northwest China's Gansu Province.

Fan said one of the difficulties that the Mogao Grottoes have had to deal with has been balancing protection of the site and its many murals with the development of tourism.

"Cultural relics benefit tourism, but they are non-renewable resources. We have to give priority to protection efforts, which can give visitors the wrong impression that we do not welcome them, especially when we limit visitor numbers," Fan said, adding that digitization of the murals and other art inside the Mogao Grottoes have helped relieve the pressure of a large number of visiting tourists.

"I feel very delighted that more young people are showing an interest in archaeology and choosing it as a major. You know, only a few people studied archaeology back in our generation's day," Fan told the Global Times on Monday.

Fan said the Mogao Grottoes contain both Chinese and foreign cultural elements and that an increasing number of foreign archaeologists have been heading there to carry out research.

"We now have employees from about 30 majors in Dunhuang culture, and we need more interdisciplinary talent and welcome more domestic and foreign scholars to come to Dunhuang to figure out the unsolved mysteries of the Mogao Grottoes," she said.

Growing up in East China's Shanghai Municipality, Fan majored in archaeology at Peking University. After graduation she was assigned to work in Dunhuang. At the age of 60, Fan was appointed as the dean of the Dunhuang Academy, and later retired at 80 years old. She earned the honorary titles of the People's Republic of China and gained the national medal at the Great Hall of the People in Beijing on September 29.

Fan said that she felt the biography was also part of her responsibilities.

"Our ancestors left such a unique and profound cultural heritage for us, and we have the duty to protect them and leave them to the next generation. I spent almost my entire life protecting the Mogao Grottoes, and I also feel obligated to turn my work experience of 50 years into a text to record the history of Dunhuang," Fan said at the book launch.

The book was co-written by Gu Zifang, a professor at the School of Arts at Peking University. She spent four years finishing the book. She listened to Fan's stories and spent a lot of time reading articles related to Fan and the Mogao Grottoes.

"I was very honored to write a book for our respected teacher Fan. We chatted on the phone for many days and nights. Fan opened her heart to me without reservation, which gave me the freedom to write," Gu said at the book launch. She noted that Fan and Dunhuang are inseparable and that if she had written about Fan without mentioning the Mogao Grottoes, it would not have been a complete and true picture of this influential figure.

"The biggest difficulty for me was that I am not an archaeologist. So when it came to the professional terms in this field, I needed to check a lot of information, making sure the words and times were accurate," Gu told the Global Times.