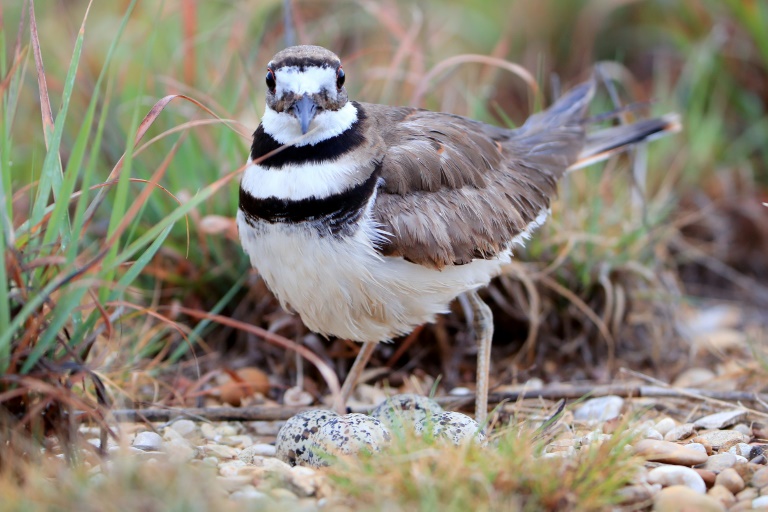 A killdeer has laid four eggs in a nest right by the planned location for the main stage at Bluesfest.(Photo: AFP)

A bird's nest in an Ottawa park steps from parliament on Tuesday risked derailing preparations for one of Canada's largest urban music festivals.

In less than two weeks, an estimated 300,000 music fans are expected to flock to the capital city's riverfront Lebreton Flats neighborhood for the annual Bluesfest.

Tickets for the July 5-15 event, which this year features headliners including Beck, Bryan Adams, the Foo Fighters and Shawn Mendes, have been on sale since February.

But a killdeer, named for its penetrating squawk that sounds eerily like "kill deer," has laid four eggs in the main stage's planned location, bringing preparations to a standstill.

Its numbers having been halved since the 1970s, the diminutive brown and white birds and their nests are protected under Canada's migratory birds law.

On Tuesday morning, yellow caution tape surrounded the cobblestone pedestrian roundabout where the bird made its nest, while two guards hired by the National Capital Commission kept a round-the-clock watchful eye.

Nearby, construction crews sat idle, waiting for the go-ahead to start setting up the stages, fencing, portable washrooms and food and drink kiosks.

It's not clear when the bird laid its eggs, which typically have an incubation period of 24 to 28 days.

"This is one of the most challenging problems we've been presented with, but we feel we can work through this," Bluesfest executive director Mark Monahan told reporters Monday.

If the situation is not resolved quickly, the festival -- which organizers say contributes more than $30 million to the local economy -- could face "some delays that could start to snowball," he added.

Monahan said possibilities include moving the nest or gathering up the eggs and sending them to a wildlife center for hatching.

Wildlife experts, however, warned against disturbing the nest, saying it could lead the parents to abandon the eggs.

On social media, people rallied for and against the bird, some calling the killdeer the "most entitled annoying bird on earth," while others snickered at its security detail.