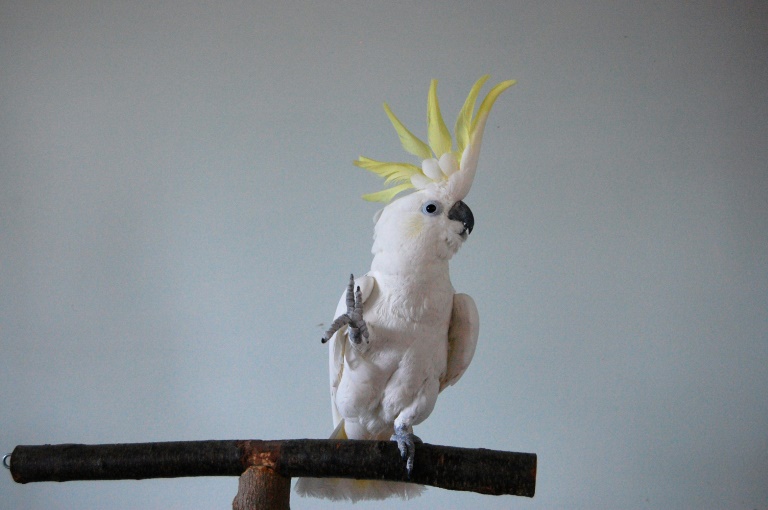 This handout from Irena Schulz at the Bird Lovers Only Rescue Service Inc. shows Snowball the dancing cockatoo lifting a foot as he "dances" to music. (Photo: AFP)

Snowball, a sulphur-crested cockatoo, shot to YouTube stardom a decade ago for his uncanny ability to rock out to the Backstreet Boys.

Now Snowball's back -- alright! -- having taught himself a dizzying array of new moves that might put you to shame, and have scientists excited about parrots' ability to process music and respond creatively.

His rhythmic body-rolls, headbangs, shimmies, and many variations thereof were documented in a new paper published in Current Biology on Monday.

"This shows for the first time that another species truly dances to human music, spontaneously and without training, just based on its own development and social interaction with humans," senior author Aniruddh Patel, a psychologist at both Tufts and Harvard universities, told AFP.

This isn't the first time Snowball has rendered his services for the noble pursuit of scientific discovery.

An earlier study by Patel in the same journal confirmed our feathered friend could groove to the beat -- though at the time, his dancing was confined to head bobbing and lifting his feet, actions long associated with courtship.

Soon after, Snowball's owner Irena Schulz, who takes care of him at a bird sanctuary in Duncan, South Carolina, noticed he was making movements to music she hadn't seen before.

The development was all the more remarkable for the fact that she hadn't attempted to train him, save for providing some verbal encouragement with words like "Good Boy!" as she swayed back and forth and waved her hands.

Had Snowball lifted his game to another level and taught himself some slick new moves?

To answer this vital question, the scientists played him the 1980s classics "Another One Bites the Dust" and "Girls Just Want to Have Fun," each three times, for a total of 23 minutes.

The study's lead researcher, R. Joanne Jao Keehn, who is a cognitive neuroscientist as well as a classically and contemporarily trained dancer, then studied video footage frame-by-frame.

She confirmed that he had indeed acquired a diverse repertoire of 14 distinct moves, and two combination moves.

"Here, we're looking at highly complex movements, many of which are not part of natural parrot behavior," Patel told AFP, adding that this suggests cognitive planning of actions and the willingness to choose between alternatives to respond to a stimulus.

"I wish I could dance like Snowball," he added.

While the internet is replete with videos of parrots dancing, suggesting Snowball's abilities are far from unique, the ability is notably absent from primates, our closest genetic relatives, and our close companions dogs.

What sets parrots apart might be their unique capacity for complex vocal learning, which is then paired with other advanced cognitive abilities and the tendency to form long-term social bonds, the paper said.

Looking ahead, Patel and his colleagues are keen to explore this social context and determine if Snowball dances to strengthen his bond with people.

"When it comes to dancing, people don't just dance by themselves. They typically seek out other people and they act socially," said Patel.