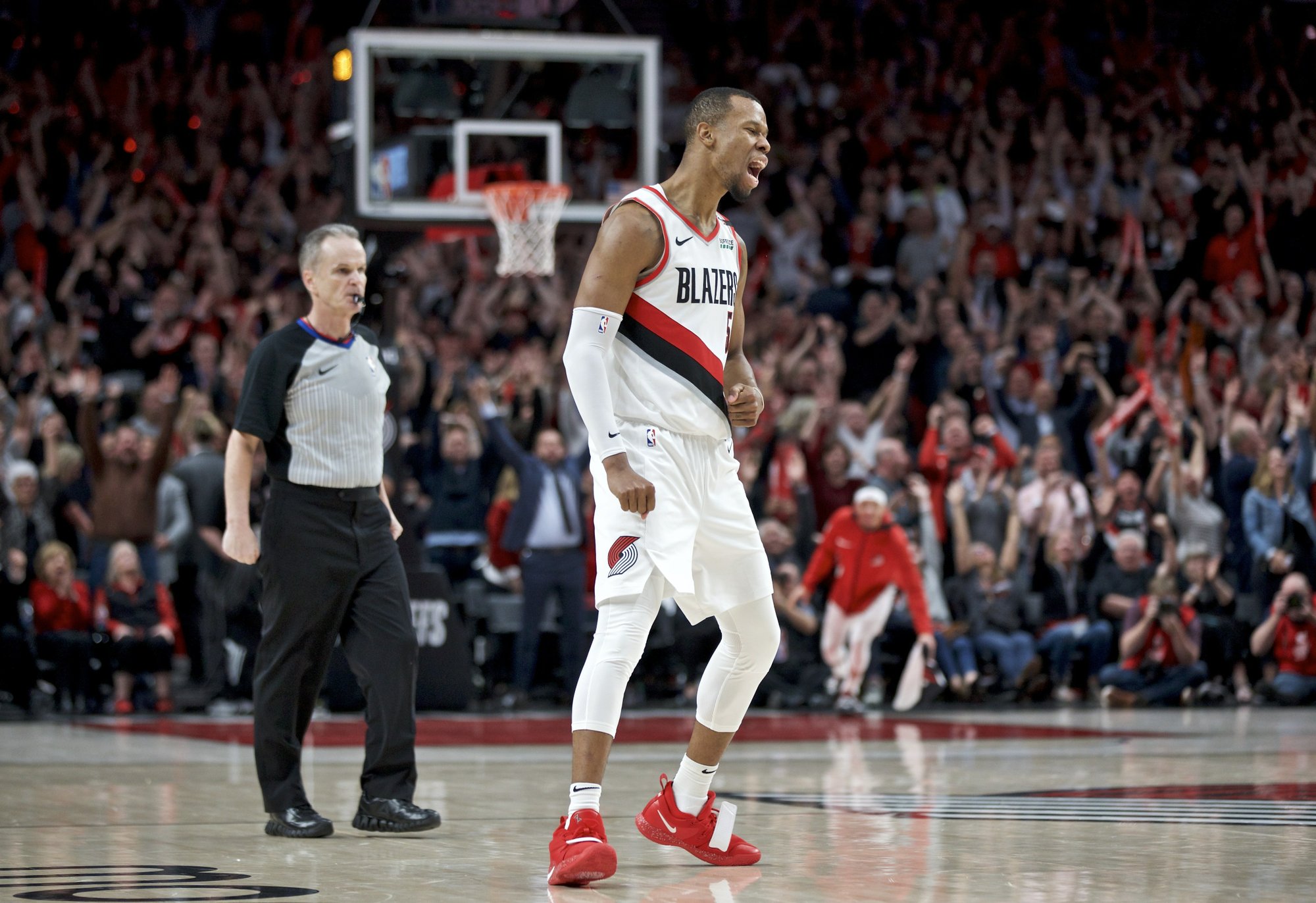 Rodney Hood checked back into the game, a fresh body among the weary ones all over the court.

Eager for postseason redemption after struggling in the playoffs last year, Hood got his chance Friday night.

All he had to do was wait until an NBA postseason record-tying fourth overtime.

Hood hit the key 3-pointer with 18.6 seconds left and the Portland Trail Blazers beat the Denver Nuggets 140-137 to take a 2-1 lead in the Western Conference semifinals.

Hood was a starter for Cleveland last season when the playoffs opened, but fell out of favor and refused to check into the final minutes of a blowout win over Toronto in the second round. He was acquired by the Blazers in a February trade.

“I didn’t give up. I didn’t give up on myself, just kept playing, kept working,” he said. “I had no idea that I’d end up in Portland in this type of situation. But to be here, to have my family in the crowd when I saw a lot of sad faces last go-round, to be here is very emotional for me, to be quite frank.

The Blazers and Nuggets played a lot already.

It was just the second quadruple-overtime playoff game in NBA history, joining a 1953 game between the Boston Celtics and the Syracuse Nationals.

CJ McCollum matched his career playoff high with 41 points and Damian Lillard added 28 for Portland, which stretched its winning streak at home to 12 games dating back to the regular season.

Hood scored seven points in the final OT and helped the Blazers remain unbeaten at home this postseason.

Nikola Jokic had his third triple-double of the playoffs with 33 points, 18 rebounds and 14 assists, but missed a crucial free throw with 5.6 seconds to go. The 7-foot center played 65 minutes, two shy of the postseason record.

Jamal Murray had a playoff-high 34 points for the Nuggets. Game 4 is Sunday.

Hood’s jumper tied the game at 133 with just over a minute left in the final overtime. Will Barton missed the first of two free throws for Denver before Hood added a baseline jumper. Paul Millsap’s hook shot with 27 seconds left gave the Nuggets the edge.

But Hood’s 26-foot 3-pointer gave Portland a 138-136 lead as time wound down. Jokic missed the first of two free throws for Denver and Seth Curry made free throws for the Blazers to close it out.

“Rodney Hood a huge impact on the game, and they went to him,” Malone said.

In the first overtime, McCollum’s layup tied it at 109 with 8.7 seconds left and Jokic missed an off-balance 3-pointer at the buzzer.

With the game knotted at 118 in the second overtime, Jokic missed a 3-pointer and a jump ball with 5.7 seconds left was grabbed by McCollum. Portland called a timeout with 4.1 seconds on the clock but Lillard missed a 3-point attempt as time ran out.

Millsap’s jumper with 32 seconds left gave the Nuggets a 129-125 lead in the third overtime, but Lillard’s bank shot closed the gap and he added a layup that re-tied it again with 8.4 seconds left.

The Blazers, in the conference semifinals since 2016, have won the last two games after second-seeded Denver’s victory in Game 1.

Maurice Harkless started for the Blazers after rolling his ankle in the second quarter of Game 2 and sitting out the rest of the way.

Torrey Craig was also day-to-day but started for Denver, wearing a clear mask after his nose was bloodied in Wednesday’s game.

Portland led by as many as 10 points in the opening half but the Nuggets pulled in front 38-37 on Murray’s running 3-pointer. Portland went into the break with just a 48-47 edge.

Nuggets: Denver was 3-1 over the Blazers in the regular season. ... Gary Harris fouled out with just over a minute left in the third overtime. Red Rocha and Paul Seymour of Syracuse set the NBA record by playing 67 minutes in the March 21, 1953, quadruple-OT game in Boston.

Trail Blazers: The Blazers showed Lillard’s 37-foot shot that clinched the first-round series against the Oklahoma City Thunder before the game and the crowd at the Moda Center against cheered. ... Portland was 32-9 at home in the regular season.

MAN IN THE MASK

The Nuggets called Craig’s injury a nasal contusion. The clear mask he donned was from a previous injury.

“Obviously I don’t think it’s comfortable. I don’t think it’s something that he prefers,” Malone said. “But with the injury that he sustained and the bleeding, and the fact that this is similar to another injury that he incurred, it’s being really preventative and making sure it doesn’t get any worse. Torrey’s one of those guys, he makes no excuses. He’s a tough kid.”

Enes Kanter finished with 18 points and 15 rebounds, but said afterward he re-injured his left shoulder — originally hurt in Game 5 against the Thunder.

“I will just go home and get some rest. I don’t know if I can play the next game but I will do my best to be out there with my teammates,” he said.

Game 4 is set for Sunday in Portland.