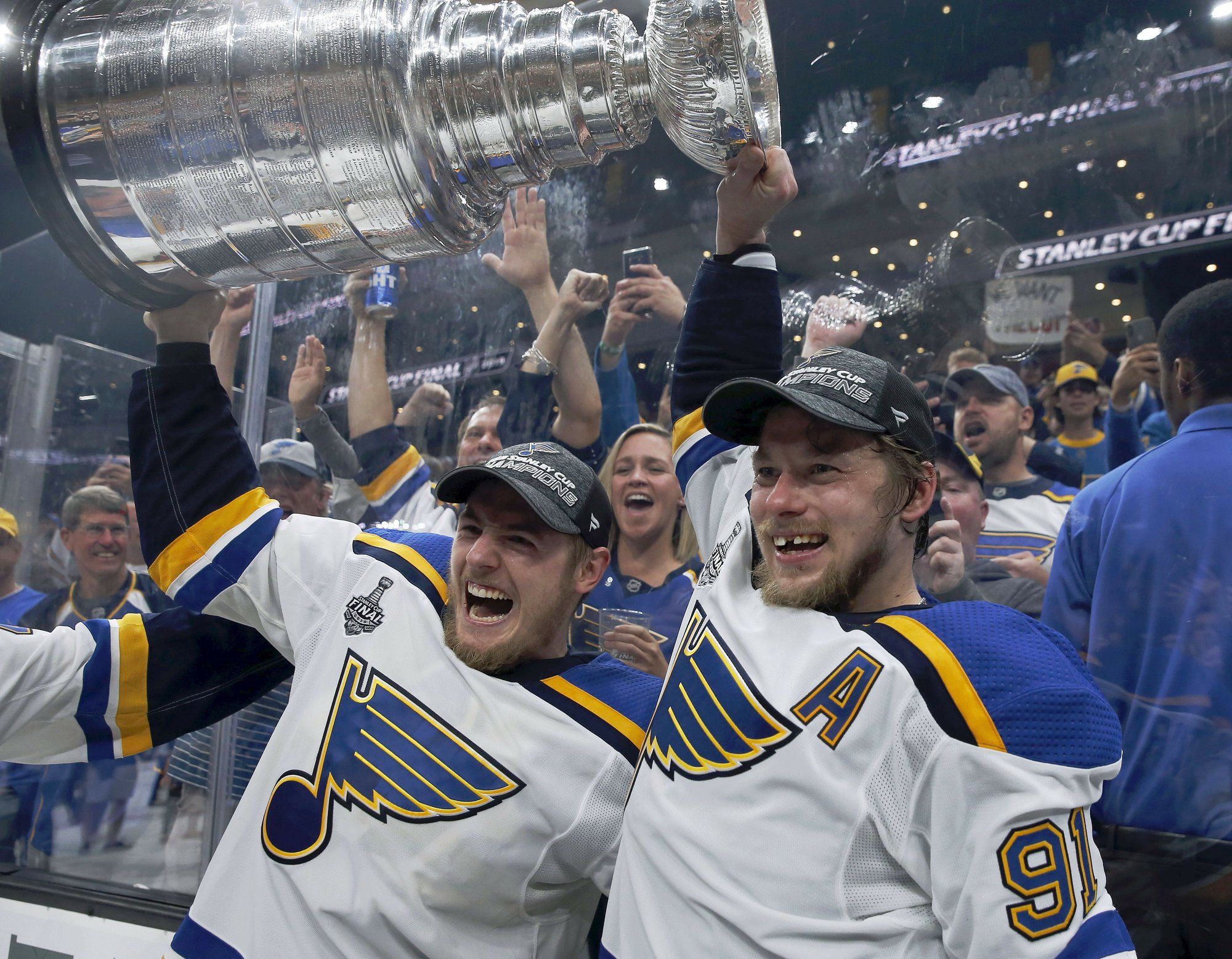 Blues goalie Jordan Binnington was waiting patiently, as NHL rookies learn to do, while the Stanley Cup was passed from teammate to teammate across the recently conquered ice of the new Boston Garden.

Thirteen St. Louis players took their turn with the iconic trophy, raising it above their heads, lowering it for a kiss, posing for a picture.

Finally, understudy Jake Allen gave the starter a little shove, and the Game 7 star timidly skated forward to receive the Cup and cap off one of the great rookie runs in NHL history.

Binnington stopped 32 shots, and Conn Smythe Trophy winner Ryan O’Reilly scored for the fourth straight game Wednesday night to lead the Blues to a 4-1 victory over Boston in Game 7 of the Stanley Cup Final and their first NHL championship.

“To bring a Cup to a city for a first time is crazy. Tough to put into words,” forward Jaden Schwartz said on the ice as players and team officials took their turns caressing their new bauble. “These fans have been waiting a long time. It’s exciting. We’re going to have a lot of fun with it.”

O’Reilly added an assist, Alex Pietrangelo had a goal and an assist and Brayden Schenn and Zach Sanford also scored for St. Louis, which had the worst record in the league in early January but won 30 of their final 49 regular-season games.

“Once we pulled it together, we were tough to beat,” said coach Craig Berube, who took over when Mike Yeo was fired in November.

He is the fourth coach in the past 11 years hired in midseason to lead his team to the NHL title.

Behind Binnington, the Blues eliminated the Jets in six games, the Stars in seven and then knocked out the Sharks in six to reach the final for the first time since 1970. That year, the Blues lost in Boston when Bobby Orr flew through the air after scoring his Cup-clincher — a goal that is commemorated in bronze outside the building.

“It’s pretty crazy how things come full circle like that,” Sanford said. “You know, this team deserves it more than anyone, I think. This is the best group of guys ever. We put in the work, and we earned it.”

In a physical series that left Bruins captain Zdeno Chara with a broken jaw and saw two Blues suspended for head hits, the teams took turns winning the first three games, with Binnington getting pulled from a 7-2 loss in Game 3. St. Louis won the next two to move one win from the title, but Boston erupted for five goals in Game 6 on Sunday to force the series to the limit.

Boston had home-ice advantage, along with a huge edge in Stanley Cup and Game 7 experience: Five Bruins remained from the team that beat Vancouver in seven to win the franchise’s sixth title in 2011, then returned to the final two years later.

But it was the rookie Binnington — not the 2014 Vezina Trophy winner Tuukka Rask — who took a shutout into the final minutes Wednesday. The Blues were never really in danger after scoring twice in the final few minutes of the first period.

“He bounced back. We knew he would,” Pietrangelo said. “Unbelievable first period. His confidence, his swagger, his belief in himself — unbelievable.”

Rask, who had been the favorite for the postseason MVP if the Bruins had won, stopped 16 shots. The Bruins outshot St. Louis 33-20, but Matt Grzelcyk scored Boston’s only goal.

The Blues went ahead at the end of the first period on goals from O’Reilly and Pietrangelo about three minutes apart. The second period was scoreless, then Schenn made it 3-0 with 8:35 to play and Sanford put it out of reach before the Bruins spoiled Binnington’s bid for a shutout.

“I’m sure there’s a bright, bright future for this team,” Chara said. “I’m sure everyone pictured it differently, and we believed that it was there for us. That’s sports. You’ve got to kind of take those and move on.”

Returning to the site of their last appearance in the final, the Blues won for the third time in Boston this series and an NHL record-tying 10th time in the postseason.

Not so surprising with Gretzky, who is the NHL’s leading regular-season and playoff scorer. But O’Reilly had just three goals in his first 22 postseason games.

Fans at a watch party at the Enterprise Center in downtown St. Louis celebrated Wednesday night after the NHL St. Louis Blues defeated the Boston Bruins 4-1 in Boston to win the first Stanley Cup in franchise history. (June 13)

“The guy was a beast all playoffs,” Schenn said. “He deserves it. He’s a hell of a player. Binnington’s a beast. What a team to be a part of.”

Boston will have to console itself with the two major sports championships it has already won in the past year, or the dozen trophies since 2002 that have been chauffeured through Boston in a parade of the city’s iconic, amphibious Duck Boats.

Three of them have come at St. Louis’ expense, including the cathartic 2004 Red Sox World Series title that ended an 86-year drought.

Now it’s St. Louis breaking through against an Original Six franchise with a half-dozen banners already.

“They’ve been a historical team. They’ve won so many Cups,” Blues defenseman Vince Dunn said. “We came into the season with a lot of hopes, and we let each other down a bit for the start of the season. But there was no doubt in our minds that we couldn’t come back and come out on top.”

The Bruins tried to harness all the local karma they could.

Olympic gold medalist Aly Raisman and Julian Edelman waved a banner before the game while wearing David Ortiz jerseys; the Red Sox slugger is recuperating just a mile or so away from an assassination attempt in his native Dominican Republic.

Retired Red Sox pitcher Curt Schilling also was in the crowd, wearing his World Series ring and a Bruins jersey. Portable party Rob Gronkowski also made an appearance on the video board.

And the Bruins responded, dominating for long stretches of time except in the way that mattered most.

The Blues had just one shot on goal heading into the final minutes of the first period, but they scored first when O’Reilly deflected a shot from Jay Bouwmeester into the net. Then with just 8 seconds left in the period and Bruins forward Brad Marchand tentative on a line change, Pietrangelo beat Rask to make it 2-0.

Bouwmeester played in 1,184 regular-season games — the third most among active players who had not gotten their names etched on the Stanley Cup.

That earned him the honor of being the first player to receive the trophy from Pietrangelo, the captain.

“It was awesome,” he said. “I’ve been waiting a long time, and I’m pretty honored that he gave it to me.”