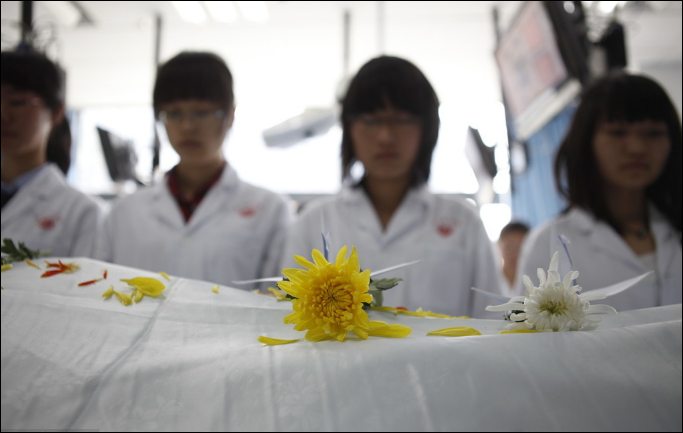 Medical students of Shenzhen University pay their respects to the body of a voluntary donor, March 26, 2012. (Photo: IC)

With Christmas soon approaching, many young people are buying gifts and making dinner reservations, but Geng Yingying is thinking about a serious subject -- death.

Geng is a healthy 21-year-old student at Northwest Normal University in Gansu Province. She signed some documents to donate her body for medical research and education because she wants to leave a legacy to the world after her death.

She first learned about body donation through a volunteer activity in 2016. Not long after that, one of her friends died in an accident.

"I realized life is vulnerable and I wanted to make it more meaningful," she said.

Geng is one of a growing number of young Chinese who have registered as voluntary body donors in recent years.

The number of registered volunteers for body and organ donations surpassed 2,610 in Gansu by Nov 20, compared with just 80 in 2014, according to the statistics released by the local Red Cross Society.

In Beijing, more than 21,100 people applied to donate their cadavers by the end of 2017 since the city started a body donation registry in 1999. So far, over 2,600 donations have been used for medical research and education, according to the Beijing Red Cross Society.

There has been an increase in the number of young volunteers who are well educated and are more willing to accept new ideas. "We hope their actions could mobilize more people to support the cause," said Yuan Bo, secretary-general of the Gansu Provincial Red Cross Society.

He added that body and organ donations promote advancements in medicine and benefit a growing number of critically ill patients who need organ transplants.

Zhan Haibing is a postgraduate student in the School of Public Health at Lanzhou University. He refers to cadavers as "silent teachers."

"'Silent teachers' have played an irreplaceable role in medical education and research. They can give medical students a real understanding of human bodies," Zhan said.

Yuan attributed the traditional belief, lack of knowledge on donation procedures, and failure to obtain consent from families of the potential donors as three main reasons that have long hampered donations.

Chinese have traditionally held that a person's body should remain intact because they believe there is an afterlife, and they see a traditional burial as an obligation of filial piety toward their elders.

Undoubtedly, Geng's decision to donate her body was strongly opposed by her parents.

In China, the voluntary body donation registry needs consent from an executor who must be a direct relative of the donor, such as the parents, adult children or siblings.

She convinced her parents to support her at last. Her brother even signed as her executor.

As the laws and the overall environment for donation continue to improve, and people's attitudes on funeral customs are gradually changing, body donations have become more acceptable.

Liang Jiali, another university student who registered to donate her body to science, said her parents strongly opposed her decision at first.

"I patiently explained to them my reasons and shared the stories of other donors. They finally understood me. To my surprise, my mother even decided to become a body donor too," Liang said.

People are showing more respect and understanding to the donors.

Last year, the Gansu Red Cross Society set up a memorial park for body and organ donors in the provincial capital Lanzhou. In the park stands a monument on which all of the donors' names are engraved.

Every Tomb-sweeping Day, the relatives and volunteers visit the park paying their tribute to these donors.

Meanwhile, many Chinese universities have advocated "life education." They ask their students to participate in volunteer activities in hospitals, funeral parlors, nursing homes and red cross societies to better understand the meaning of life.

Geng has also signed documents to donate her corneas. Her story has inspired many others to make the same choice.

"I know it requires courage," she said. "But if you can understand the real meaning of life, which is about giving back, you'll find it's not that difficult to make the decision."