CULTURE Bolivia's women wrestlers back in the ring after unrest

Bolivia's women wrestlers back in the ring after unrest 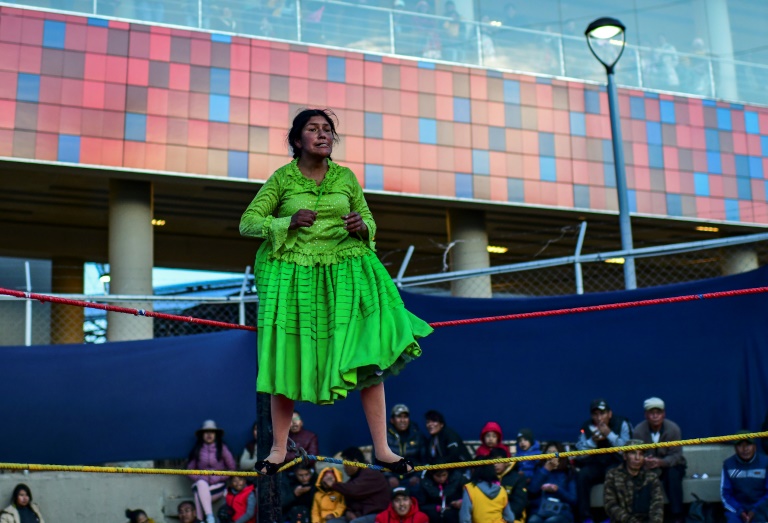 Bolivian wrestler Lidia Flores, aka "Dina, The Queen of the Ring," readies for action. (Photo: AFP)

Suspended for two weeks as anti-government protests and blockades rocked El Alto, a sprawling city overlooking La Paz, the cholitas luchadores are back on the canvas at Sharks of the Ring wrestling club.

The raucous crowd of elderly men, young women, and parents with small children heckle and hurl insults as the indigenous women wrestlers, wearing traditional multilayered "pollera" skirts and long braids, flip, kick, punch and pull each other's hair in a chaotic show that often spills outside the ring onto the pavement.

Flores, whose performance name is "Dina the Queen of the Ring," says wrestling is a welcome relief from the pressure of her day job cooking in a restaurant.

"Wrestling de-stresses me," Flores, 44, tells AFP as she stands outside the venue before the match handing out fliers to people walking through a street market.

After a fortnight hiatus, the feisty mother of three, who has been wrestling for 12 years, is "very keen" to get back in the ring.

"With these problems, with so many blockades, nothing to eat, it was very stressful," she says, a black bowler hat worn by many indigenous women perched on her head.

Weeks of unrest triggered by the disputed October 20 election, which Evo Morales claimed to have won and opposition groups said was rigged, have made life difficult and dangerous for people in El Alto, a stronghold for the former president.

Two days later, police tear-gassed demonstrators who marched on La Paz with five of the bodies to demand justice and the resignation of interim President Jeanine Anez, who replaced Morales after he quit on November 10 and fled to Mexico.

With roads blocked and many afraid to leave their homes in the city more than 13,000 feet above sea level, the Sunday high-altitude wrestling matches were canceled for a fortnight.

"It was the first time (in eight years) that we had to stop because of conflict," says organizer Marie Penaranda, 30, as she sells tickets for 20 bolivianos (around $3) each.

Tensions eased at the weekend with the passing of a bill authorizing new elections and ongoing talks between the caretaker government and protesters aimed at ending the unrest.

Ana Luisa Yujra, better known as "Jhenifer Two Faces," says the spectacle is "affordable" therapy for the crowd after so much violence.

"I love demonstrating the ability, agility, and capacity that a woman can have," says Yujra, who works as a geriatric nurse.

Flores, wearing a shawl the same shade of garish green as her flouncy skirt, climbs into the ring and tosses her bowler hat on the floor.

To warm up for her mixed pairs fight against Yujra, the plump wrestler performs a couple of running somersaults on the canvas, revealing the lacy layers of her pollera and her underwear to the scores of spectators.

Martha Mayta, 28, sits in the front row enthralled by the performance.

"It is really admirable ... how these women in a pollera can get into the ring, wrestle, be in those positions," she tells AFP.

The sight of male and female wrestlers stomping, beating, choking and spraying water on each other does not bother the crowd as they egg on the performers to go even further.

"It is a demonstration for us of a woman defending herself against men," Norah Martinez Salazar, 34, tells AFP.

"It seems rough, but it's something interesting."

After an intense battle peppered with references to the political crisis gripping the country, Yujra and her male partner decked out in shiny red trousers and matching top, are declared the winners.

A visibly exhausted and disheveled Flores blows kisses to her fans as she leaves the ring defeated and returns to the makeshift change room.

"I'm really tired and out of breath."