Book tells stories of 20 Chinese residents in Italy during pandemic 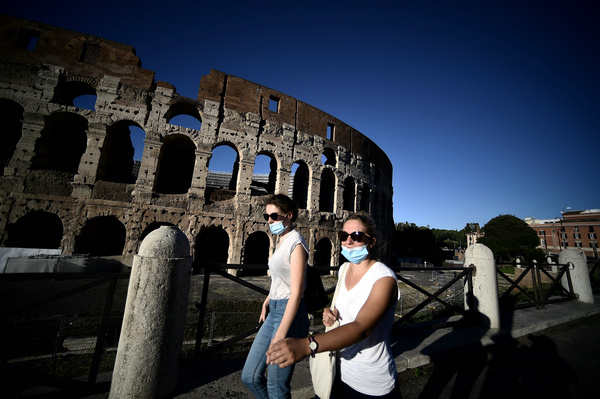 Visitors to the Colosseum in Rome wear masks on Oct 8. Italy has tightened measures to contain a resurgent coronavirus outbreak. (Photo: China Daily)

The 232-page book they all co-wrote－published in both Chinese and Italian－is called Noi Restiamo Qui: Come La Comunita Cinese Ha Vissuto L'Epidemia (We'll Stay Here: How the Chinese Community Lived Through the Epidemic).

"China and Italy are linked in many ways and the coronavirus is another one of them," says Hu Lanbo, a resident of Rome since 1989, who launched and edited the project and wrote two chapters herself. She was referring to China and Italy being the first two countries to face major outbreaks of the coronavirus.

Hu says the idea came to her during the early days of Italy's outbreak.

"An Italian woman contacted the office where I worked to ask if we could help her find masks for her son, who was suffering from leukemia," Hu says. "The little one was in the hospital and he had to wear a mask, but at that time masks were hard to find in Italy, especially in children's sizes."

Hu mentioned the problem on WeChat, a Chinese messaging app, and got many helpful suggestions. Finally, she says, two Chinese women in Rome gave her 50 masks from those they had stockpiled for their own children. But awareness also rose and soon a group of mothers raised 80,000 yuan ($12,000), enough to buy 20,000 masks that were donated to the main pediatric hospital in Rome.

"As I spoke to other Chinese people in Italy, I realized that almost every individual, family, or organization played some role in providing masks or helping out in some other way, and the idea for the book came from that," Hu says.

"Here in Italy we have the reputation of being a closed community but if that was true, why was the reaction of the Chinese community so generous?" she asks. "We were in a unique situation: we had the cultural education China gave us, the collective spirit, but we were also part of Italy and we felt a responsibility connected to that."

Hu says she invited members of the Chinese community living permanently in Italy－the group included some in the tourism industry, actors, translators, designers, writers, musicians, educators, and mediators, from Palermo in southern Italy to Turin in the north－to tell the story about how the pandemic changed their lives. She says 20 people submitted stories that appeared in the book, including one poem. Most were written in Chinese and translated into Italian.

"A common thread is that we all realized we were facing the same challenges the Italians were facing and we had to work together to face them," Hu says. "Cultural differences did not stop our desire to understand each other."

Hu says the book would act as a snapshot in time.

"Now it's been eight months since the start of the pandemic in Italy and three months since we received the last contribution to the book," she says. "We have captured a piece of history by telling the stories of our lives during such an unusual period, and that gives this book meaning."

In the first chapter of the book, Hu summed up the purpose of the volume she worked to produce.

"We stay here in this land called Italy," she writes. "It's not that we aren't afraid, it's that we can't bear to leave her … We love Italy as if it were our homeland and abandoning it would break our hearts."