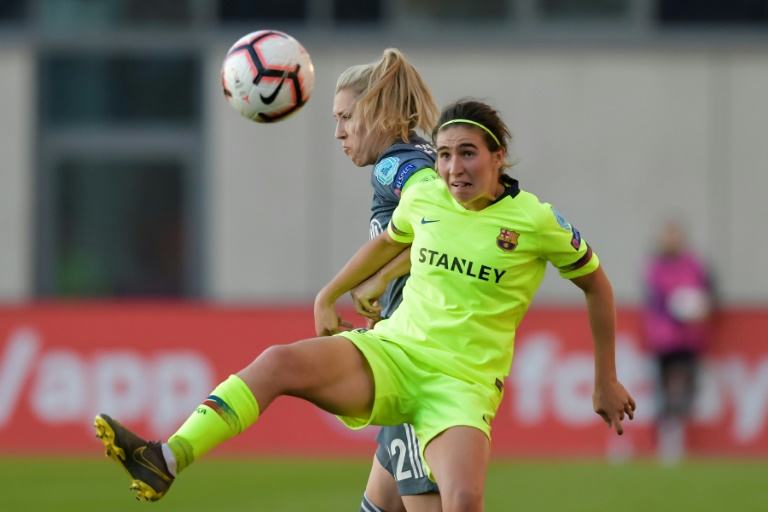 Barcelona and Bayern Munich were drawn together in the semi-finals of this season's women's Champions League. (Photo: AFP)

Back in 2001/02, the semi-finalists in the first ever UEFA Women's Cup were Frankfurt, HJK Helsinki, Toulouse and Swedish side Umea.

Fast forward 17 years to this season, and the presence in the last four of the Champions League of Bayern Munich, Barcelona, Chelsea and Lyon is testament to the growing influence of Europe's biggest clubs on the women's game.

In those early days in the last decade, Arsenal were the pioneers among the giants of the men's game when it came to launching a successful women's team. They were European champions in 2007, in an ecosystem dominated by clubs dedicated entirely to women's football.

However, since the competition was relaunched as the Champions League in 2009, matching the prestigious equivalent in the men's game, all of the top English clubs got on board with the idea of having a women's team.

Meanwhile, it is Lyon who are now the giants on the women's scene, with five Champions League crowns this decade -- including the last three -- and a total of seven appearances in the final in the last nine seasons.

In the last 10 years, huge progress has been made, and the majority of clubs from the so-called big five European leagues have invested on a large scale in women's football.

In France, which will host this year's World Cup in June and July, of the 40 clubs in the top two divisions of the men's game, all but four now have dedicated women's teams as well, with Lyon and Paris Saint-Germain the leading outfits.

The situation is similar in Spain, where a world record crowd for a women's game, of 60,739, watched the recent showdown between Atletico Madrid and Barcelona. With the notable exception of Real Madrid, all the leading clubs have a women's team.

Meanwhile, in Italy, which long lagged behind its neighbours in terms of the development of the women's game, things have been improving since the national federation made it an obligation for professional clubs to have women's teams, at least at youth level. Juventus, so dominant in the men's Serie A, have just retained the women's title.

So just what is the interest for Europe's biggest clubs in launching a women's team?

"I know that at Lyon, the president (Jean-Michel) Aulas used it to improve the club's image. It was important," says Patrice Lair, the former coach of Lyon and of PSG.

Nevertheless, there are still some clubs, like Real, who have resisted from delving into the women's game.

In 2016, Real president Florentino Perez told AFP that he was holding back because he wanted a team that would be a "leader" on the women's scene.

"I think that there will be a natural evolution and that the club will certainly make a decision," said Real coach Zinedine Zidane recently.

"What is for sure is that you can see how it is on the rise, and that is great for women."

One major obstacle still holding clubs back is the lack of financial incentive, with revenue streams from television and marketing still a long, long way from those in the men's game.

"It takes some investment, but I think long-term it's going to give back," Nadia Nadim, the Danish international formerly at Manchester City and now at PSG, told AFP.

"There is a huge market, for example in Denmark more girls play football than boys, so financially I think that's the right move to make."

In England, sponsors have already got the message.

In March, Barclays, the bank which sponsored the men's Premier League between 2004 and 2016, announced a deal to become the first ever title sponsor of the Women's Super League in a three-year deal reportedly worth more than £10 million ($12.9 million) per year.

Could that be a sign that the big boom financially is coming after this year's World Cup?