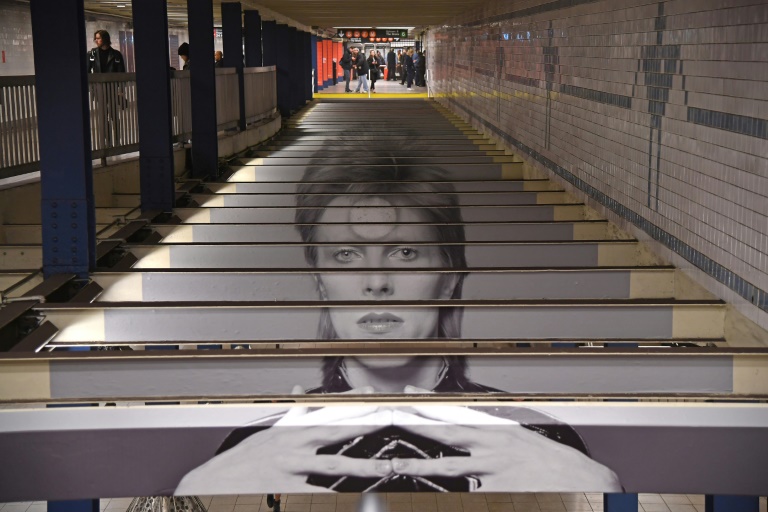 A David Bowie art installation is seen at the Broadway-Lafayette subway station on April 19, 2018 in New York City (Photo: AFP)

The first-known recording by David Bowie, when he was the 16-year-old singer of a band called The Konrads, is going up for auction.

Omega Auctions in northwestern England said Monday that the reel tape would go on sale on September 11, with an expected price of 10,000 pounds ($13,100).

The song, "I Never Dreamed," was recorded in a studio in 1963 when The Konrads asked Bowie, then known by his given name David Jones, to sing lead vocals.

A harmonious rock 'n' roll song in the vein of classic Beatles, "I Never Dreamed" was submitted to record label Decca in an unsuccessful bid for a recording contract.

Konrads drummer David Hadfield said he had "decided that David was the best person to sing it and give the right interpretation.

"So this became the very first recording of David Jones (Bowie) singing 55 years ago!" he said in a statement.

The tape was recently discovered in a loft, the auction house said.

Bowie left The Konrads shortly afterward and did not achieve stardom until six years later when, already a solo artist, he released "Space Oddity" about the fictional astronaut Major Tom.

Bowie earned a reputation as one of the most innovative voices in rock over a half-century career that experimented with soul, disco, jazz and ambient music.

He died in 2016 from an undisclosed battle with cancer, two days after releasing his final album on his 69th birthday.