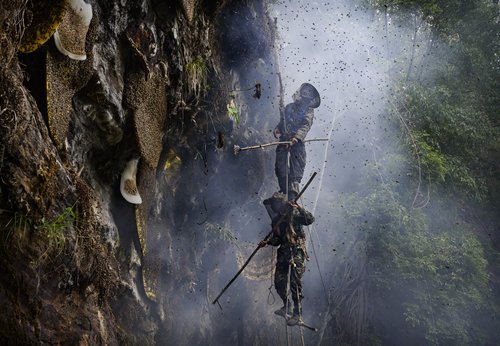 This job is definitely not for the faint of heart.The Lisu people have to climb up a cliff to collect wild honey.These brave honey hunters live in Mangshi, Dehong Dai and Jingpo Autonomous Prefecture of Southwest China's Yunnan Province.To get the honey, they have to be prepared to get attacked by swarms of bees.Hunters suit up in protective gear and use smoke to scatter the giant Himalayan honey bees from their hives to reduce the risk, but there are literally thousands of them in each hive. An adult Himalayan honey bee, the world's largest honey bee species, can measure up to 3 centimeters in size.The hunters never take honey from all of the hives in one area. They leave enough for the bees to ensure they will return the following season.Harvesting the honey has long been a cultural tradition and economic staple for the Lisu people, an ethnic minority group in the southwestern mountainous areas of Yunnan Province along China's border with Myanmar.The Lisu people are known for their ability to move skilfully in the mountains, but fewer honey hunters still practice the dangerous and exhausting pursuit of collecting honey from isolated hives on towering cliffs now. The tradition is also not immune to environmental change: some honey hunters claim they are finding fewer hives than in the past because bee populations are impacted by heavy pesticide use by local farmers as well as global warming.Cliff honey is considered purer and healthier than regular honey, and is coveted by many people in China where it typically sells for upwards of 300 yuan ($50) per kilogram. A single hive can have many kilograms inside.