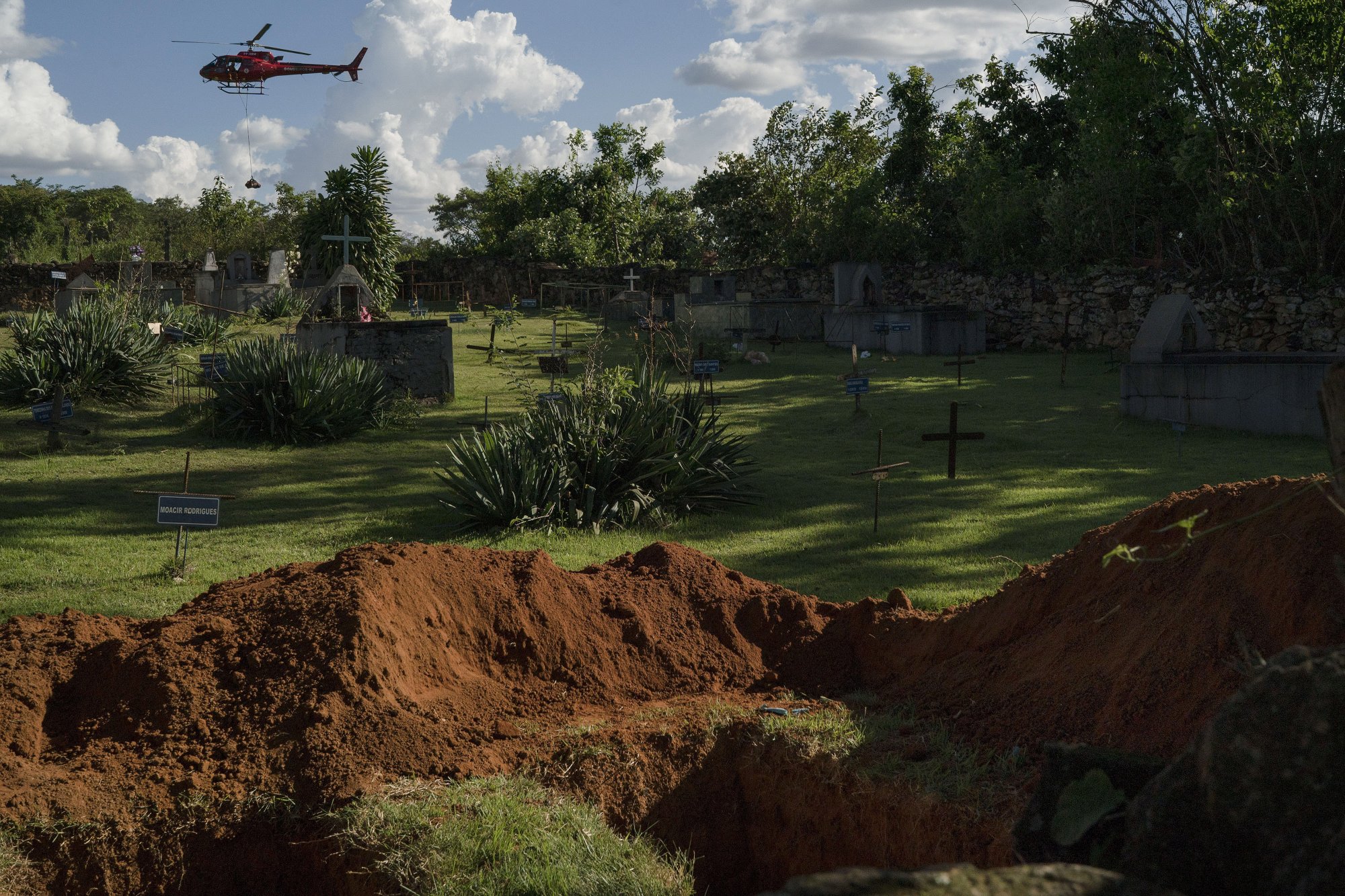 In this Jan. 28, 2019 file photo, a helicopter carrying a body pulled from the mud, days after a Vale dam collapsed, flies over a cemetery with two open graves in Brumadinho, Brazil. (File Photo: AP)

Brazil’s leading research institute warned Tuesday of a potential health crisis from the failure of a dam in Minas Gerais state, which unleased a flood of muddy mining waste that killed at least 134 people.

Fiocruz said the contamination of the ecosystem and the nearby Paraopeba River could precipitate the spread of dengue, yellow fever or diarrhea in communities around Brumadinho, the city where the mining reservoir breached Jan. 25.

Tests of the contaminated mud and water from the river are underway, but environmental experts said they expect to find toxic concentrations of iron oxide and other heavy metals.

Over the longer term, Fiocruz said, the isolation of rural communities, stress and trauma from the loss of a family member or job and drastic changes in the quality of life also have a significant impact on people’s health.

Fiocruz, linked to the Ministry of Health, largely based its assessments on studies carried out in the aftermath of a mining dam collapse in November 2015, also in Minas Gerais.

The collapse of the larger reservoir killed 19 people and left 250,000 people without drinking water. It had been considered Brazil’s worst environmental disaster, but experts argued Tuesday that Brumadinho had surpassed it.

“This is the biggest mining dam disaster in Brazil and one of the greatest in the world”, said Mariano Andrade da Silva, a researcher at the National School of Public Health linked to Fiocruz.

In Brumadinho, the breach of the reservoir unleashed about 12 million cubic meters of reddish-brown mud, threatening to contaminate 48 municipalities and affecting up to 1.3 million residents.

Authorities are still looking for 199 missing people, but no one has been found alive since Jan. 26.

About 3,000 people live in rural areas hit by the spill, many of which are cut off from the center of Brumadinho because roads remain blocked by the mud. Fiocruz experts said past experiences indicate that remote communities are particularly vulnerable to the spread of diseases and worsening of health conditions.

The institute is also monitoring the movement of the mud as it descends the Paraopeba River toward the much larger Sao Francisco River.

Experts say they don’t know yet if two hydroelectric power plants on the Paraoepeba will block the waste and prevent the contamination of the Sao Francisco River. Fiocruz said millions of people in more than 500 municipalities depend on the water of the Sao Francisco for personal use or irrigation.

The slow-moving, thick mud was initially expected to reach the first dam between Feb. 5 and Feb. 10.

Finally, Fiocruz drew attention to the fact that Brazil’s publicly funded health care system is covering most of the costs related to the disaster. Beyond health issues, the national health system also picked up the tab for helicopters, firefighters and other search-and-rescue efforts.

“The public system is the one paying, dealing with the damage, while the private sector is getting the profit”, Fiocruz researcher Diego Xavier said.