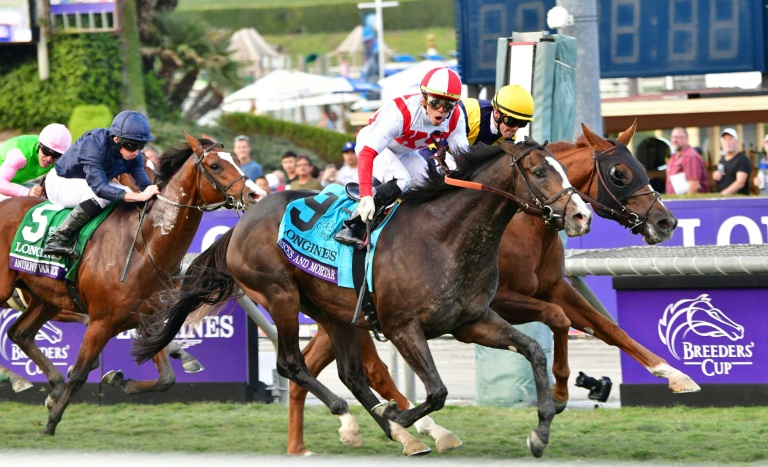 Bricks and Mortar triumphed in the $4 million Turf Saturday, edging United by a head in a rousing finish at Santa Anita that gave trainer Chad Brown a 15th Breeders' Cup winner.

Brown collected his third win of this year's 14-race, $28 million Breeders' Cup programme and tied Bob Baffert for second on the all-time wins list for trainers, a list led by D. Wayne Lukas's 20.

Anthony Van Dyck, Aidan O'Brien's Epsom Derby winner, finished third, his chances of giving O'Brien a first winner of the week dwindling when he was forced to check under jockey Ryan Moore heading into the stretch.

Bricks and Mortar notched his sixth win in six starts this year and his seventh in a row in a thriller.

"I wasn't sure until he hit the wire," Brown said.

Not surprisingly, he was sent off an even-money favorite, despite the fact that it was his first attempt at the 1 1/2-mile distance.

With Irad Ortiz aboard, the 5-year-old son of Giant's Causeway found space in the stretch, rallying from the middle of the 12-horse field to edge 50-1 shot United, trained by Richard Mandella and ridden by Flavien Prat.

Acclimate had set the early pace with United in third on the rail and Bricks and Mortar a few lengths further back.

"He needed every inch of the mile and a half," Brown said. "I was worried when he was in between horses.

"I talked to Irad and he said he was pulling the whole way so he gave him his head and let him get in the clear, and once he saw daylight he just went."

Ortiz, who rode his third winner of the week, said Bricks and Mortar "might be the best I’ve ever ridden."

"Today he was a little keen with me so we were closer to the pace than normal," Ortiz said. "So, I just tried to get him to relax. When I asked him to run, I looked behind me and saw we were clear.

"He saw that other horse in front of us and he fought all the way to the wire."

Prat said he thought he was n the winner as they turned for home.

"He ran huge," Prat said. "A great horse beat us, but it was an amazing race from my horse."