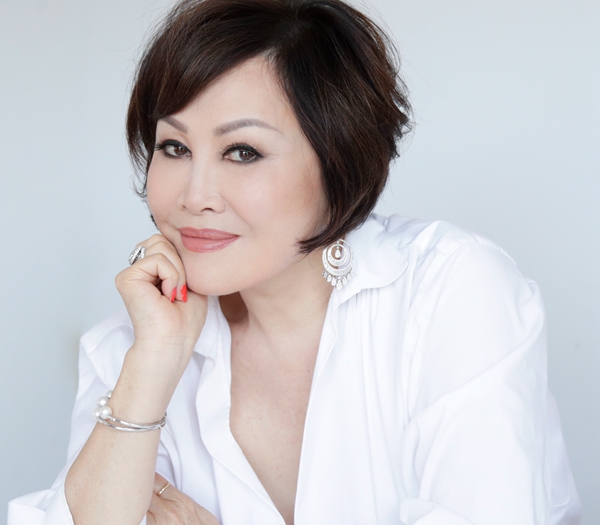 Yue-Sai Kan has been busy with such issues as helping to bridge the cultural gap between China and the West, and environmental sustainability. (Photo: China Daily)

Yue-Sai Kan, who did a live broadcast of China's 35th-anniversary celebrations, now awaits a much bigger parade, Alywin Chew reports in Shanghai.

While many septuagenarians are content to live life in the slow lane, indulging in the occasional getaway and looking after their grandchildren, Yue-Sai Kan's daily schedule is one that would leave even people who are half her age huffing and puffing.

"Tomorrow, I start my day at 9 o'clock and I probably won't be done until 11 in the evening," says Kan, the Chinese American personality who was once lauded as "the most famous woman in China".

Widely praised for her famous television productions in the 1970s and '80s, such as One World and Looking East, which helped to bridge the cultural gap between China and the West, she is back in her birth country since she was invited to attend the upcoming 70th anniversary of the founding of the People's Republic of China.

While awaiting the Oct 1 parade, she has been keeping herself busy with other engagements, including a meeting with officials of Shanghai's Jing'an district to discuss an exhibition.

Kan is a prolific entrepreneur with a passion for sustainability. Last year, she became the "China ambassador" for the Tara Ocean Foundation, the first public-interest foundation in France committed to conserving the world's oceans. In her capacity as ambassador, Kan has sponsored Tara events in Shanghai that educate people about the importance of ocean sustainability. This year, Kan also collaborated with fashion-education platform WeDesign to launch the Executive Education in Sustainable Fashion program.

Her latest endeavour is planning an exhibition on environmental conservation at the Jing'an Sculpture Park in Shanghai in April. The centerpiece will be a sculpture named Skyscraper (the Bruges Whale) designed by Brooklyn-based firm StudioKCA. It was constructed using five metric tons of plastic waste derived from the Pacific and Atlantic oceans, and aims to raise awareness.

"This sculpture has incredible power in educating people about the problems of pollution. This will be a multifaceted exhibition-there will also be concerts, workshops and seminars to educate the public about what can be done to address the situation. We're also discussing to see how this project can be linked to Shanghai's trash-management policy," says Kan.

Kan will also meet potential donors in a bid to raise $10 million to construct a new building for the China Institute, a cultural nonprofit in New York that has since its inception in 1926 worked to forge a greater understanding of Chinese culture in the United States.

Kan is presently one of the chairpersons of the organization, alongside Chien Chung Pei, son of the late legendary architect, I. M. Pei.

Born in Guilin, a city in the Guangxi Zhuang autonomous region, Kan moved to Hong Kong when she was 2 years old. She relocated again when she was 16, this time to the US where she is now a citizen. Although she says she "isn't a true Chinese" due to her citizenship, Kan adds that she feels a strong attachment to her birth country and finds it meaningful to share more about its culture with international audiences.

"China is a very important country with 5,000 years of culture. This is something worth preserving and promoting. The China Institute is the only place in the US that can do this better than anyone else. We have proved this to be so we have been around for 93 years now. My dream is that the China Institute will continue to be around for another 100 years," she says.

Kan is also currently working on her 10th book, an autobiography.

When asked about where she derives the energy to juggle so many commitments, Kan replies: "I'm passionate about anything that has to do with making the world better. I do all these things because it's meaningful and helps others."

She also says she looks forward to attending the 70th-anniversary parade, which she believes will be "really impressive". She was the host of the first live broadcast from China during the 35th anniversary and attended the 50th as a guest.

"This will be fun for me. The 50th-anniversary parade was nice, but this one should be much bigger," she says.

"China is now so much stronger compared to what it was during the 35th anniversary. Then, it was just barely opening up. The celebration was pretty basic then.

"When a country is poor, the cities are just pitch dark at night. People go to sleep early because there's nothing to do. At the 35th anniversary, China was like that. There was nothing on the streets after 8 pm. In the day, there were hardly any cars on the roads, just bicycles.

"But just look at China now. It's just not the same country as before."