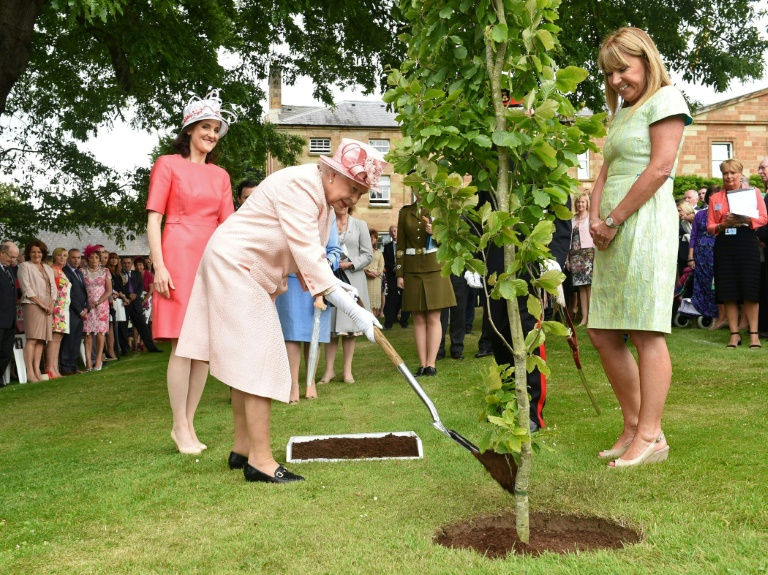 A new documentary about Britain's Queen Elizabeth II has revealed her previously unknown passion for trees.

The 91-year-old monarch has planted hundreds of trees on royal visits all over the planet and has a deep and "touching" relationship with them, according to filmmaker Jane Treays.

"She has spent her life planting trees, and so have her ancestors," the director told AFP, as the film previewed at the MIPTV market in Cannes, France.

"It was very beautiful and touching to see how she relates to them, and how much they mean to her. She has a particular love of some London plane trees (at Buckingham Palace) planted by Queen Victoria", her great, great grandmother, she said.

The Queen's secret passion emerged as she took the naturalist Sir David Attenborough on a "relaxed and funny" tour of the gardens of the Palace, which Treays shot in what she described as "the most magical afternoon of my career".

The film, "The Queen's Green Planet", which will be broadcast on ITV in Britain on April 16, highlights her work trying to build a global network of protected forests, The Queen's Commonwealth Canopy.

Dendrophilia clearly runs in the royal family. Her son Prince Charles has previously admitted to talking to plants and trees to help them grow, but recently joked that rather than taking the softly-softly approach, "now I instruct them instead".

Treays said the chemistry between the Queen and Attenborough, who are the same age and were born within three weeks of each other, helped her open up.

"It was a lovely hot summer's day... They laughed and were quite playful with each other. They have known each other a long time and because of that we see quite surprising things," she added.

In one hilarious moment, the Queen reveals that her huge collection of new varieties of plants came from people who were unsure of what to get her.

"I've been quite difficult to give presents to," she quipped, "so they've said, 'Oh, let's give her a plant'."

And her dry humour was also clear when she talked about a mulberry tree planted in the early 1600s by James I in a failed attempt to get a royal silk industry going.

"They chose the wrong variety and so the silk worms didn't produce anything, which was a great disappointment to him I believe," the Queen said.