Johnson-Thompson slightly ahead of Thiam in Berlin

British heptathlete Katarina Johnson-Thompson enjoyed a small lead over Nafissatou Thiam after two events on Thursday as the Belgian sought to add the European crown to her world and Olympic titles in Berlin. 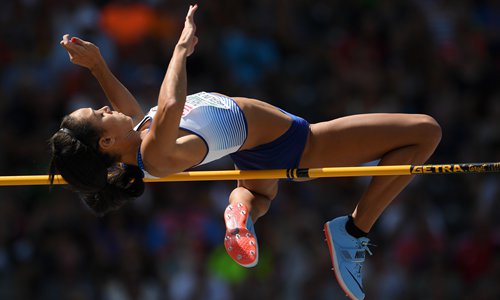 Katarina Johnson-Thompson of Great Britain appears to clear the bar in the women's heptathlon high jump at the European Athletics Championships on Thursday in Berlin, Germany. (Photo: VCG)

The Briton raced to 13.34 seconds in the opening 100-meter hurdles, just four-hundredths off her personal best, while the Belgian could only manage 13.69.

Thiam, whose best of 2.01 meters was set in May, then recorded three fails at a disappointing 1.94 meters in the high jump.

That was mirrored by Johnson-­Thompson, who set her personal best of 1.98 when finishing sixth in Rio, a position she improved to fifth at the London worlds before winning golds at the Commonwealths and also at the world indoors pentathlon in Birmingham in March.

In track qualifiers on Thursday, France's 800-meter world champion Pierre-Ambroise Bosse safely negotiated his heat to advance to Friday's semi­finals, with the final to be raced on Saturday.

Double defending champion Adam Kszczot of Poland also made sure of his progress in a bid to emulate the three-gold showing by his teammates in the field.

Thursday's evening session sees six events in which medals are up for grabs: the 200 meters, 400-meter hurdles, 3,000-meter steeplechase and javelin for the men; the 100-meter hurdles and pole vault for the women.

France's three-time Olympic medalist Mahiedine Mekhissi, who is gunning for an audacious double in Berlin, could make history when he takes to the track for the steeplechase.

The 33-year-old has already won the steeple three times (2010, 2012, 2016) and the 1,500 meters once (2014). And should he win the steeple, he would take over from sprinter Christophe Lemaitre as the French athlete with the most golds on the European stage.

He would also join the trio of German Harald Schmid and British pair Roger Black and Mo Farah, the sole athletes to have won five golds.

On Saturday, Mekhissi runs again, in the 5,000 meters this time, but he insists he remains focused first on the steeplechase.

"It's not going to be simple even when you're favorite," he said. "When you're the No.1, you're expected and other athletes aren't just going to let you run and get the victory."

Mekhissi added, "You might think that with four European titles, I have less hunger, but me, I'm always hungry for more. I always want to run.

"That's why I'm here and why I train. I don't take part in major championships just to take part. If I run, it's to perform, to shine and win medals for the France team and myself. That's what stimulated me, to do what others have never done."

The fact is Mekhissi could already have had five golds, had he not been disqualified from the 2014 steeplechase for having stripped off his singlet before he crossed the finish line in first position. There promises to be no such repeat of that wardrobe malfunction as the Frenchman goes for history in the German capital.