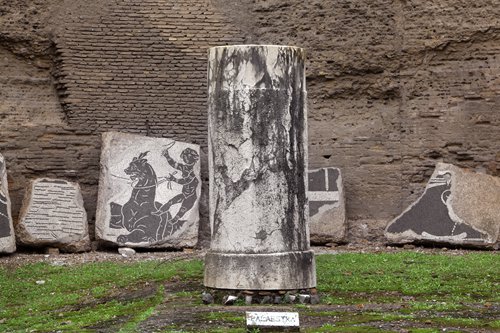 Remains of mosaics and columns of the Palaestra, Terme di Caracalla (Baths of Caracalla) in Rome. (Photo: AFP)

Italian mosaics, once all the rage in France, fell into neglect and ruin by the 1970s, when homeowners began covering them up with parquet floors or even linoleum.

The legacy is one that the Brittany capital Rennes has set out to showcase - and with good reason, because the city boasts dozens of works by key purveyors of the craft - the Odorico brothers from Italy's northeastern Friuli region.

Their mosaics can be spotted in 122 towns and cities across western France, but they are concentrated in Rennes, where the brothers settled in 1882.

Every summer, the city's tourism office puts on tours devoted to the work of two generations of Odoricos.

The tours, snubbed by the public during the 1990s, are now often sold out as interest in the neoclassical art has burgeoned.

An association of "Friends of Rennes Heritage" has identified at least 47 Odorico works in the city.

Tourist guide Therese Jannes says the brothers Isidore and Vincent Odorico emigrated to France for "economic reasons" before making it big in Rennes at the height of the Art Nouveau movement.

They started off in Paris, where they met their mentor Gian Domenico Facchina, also from Friuli, at work decorating the Palais Garnier, the Paris opera house completed in 1875 that would become an icon of the Second Empire style.

Facchina was the inventor of a revolutionary mosaic technique - the reverse, or indirect, method in which the mosaic is created in reverse on a temporary surface, then transferred to its permanent home.

The Odoricos left Paris, settling first in the central city of Tours before moving to Rennes.

At the time, the mosaic was enjoying a heydey in France, and the Odoricos positioned themselves as experts in the Venetian and Roman styles of mosaics.

The two brothers rapidly built up their order book for both public and private projects.

In 1918, six years after Isidore died, his widow and their sons - also named Isidore and Vincent - created the company Odorico Brothers, opening branches in nearby Dinard but also just outside Brittany in Nantes and Angers.

By then, when Art Nouveau was giving way to Art Deco, the rapidly industrializing city of Rennes became one of France's leading producers of mosaics.

At the height of their success, the family employed up to 100 mosaic craftsmen.

Vincent handled the back office, while Isidore, who had studied at Paris's prestigious School of Fine Arts, created original Art Deco works that are "recognizable at a glance," Jannes says.

A prominent example is the mosaic over the entrance to the city's former central market, now a contemporary art center, with the name "municipal market" in geometrical blue letters against a green and yellow background featuring subtle gradations.

Another key stop on the tour is the Poirier building, which boasts an example of one of the younger Isidore's favorite techniques - that of contrasting matte and glossy tiles.

Shiny gold and silver tiles are set in circles against a nuanced grey, blue and smoky green background.

Mosaics cover the entire facade of the building - very avant-garde in its time.

Admiring the work, tourist Julie Garfield of California said: "I love the interplay between light and dark."

Maeva Urvoy, visiting from nearby Saint-Brieuc, remarked on the mosaics' harmony with the architecture, saying they "are perfectly aligned with the building's shapes and spaces."

The final stop on the tour is the Saint-Georges municipal pool, a converted church where Isidore Odorico left his indelible mark.

Odorico Brothers shut down in 1979, more than three decades after Isidore's death.

Mosaics had long gone out of style, so much so that many works by Italian immigrants had fallen into neglect or were even destroyed.

"One day a lady found a mosaic at her home. An architect told her to remove it because it wasn't worth anything," Jannes recalls - it turned out to be an Odorico.

But today "awareness of this heritage is really growing," she says.

"People find mosaics under their linoleum or the parquet. The works aren't necessarily signed but some characteristics are unmistakable."