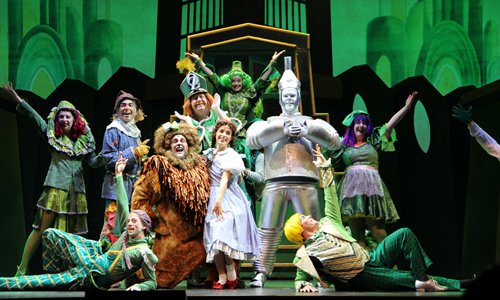 Promotional material for The Wizard of OZ  (Photo: Courtesy of One World Culture Communication)

Original Broadway musical The Wizard of Oz debuted at Beijing Tianqiao Performing Arts Center on Thursday.  At a press conference on Friday, the cast and crew shared some behind-the-scenes stories and said that they were very excited and honored to be able to bring such a classic story to the stage. "I had been attracted by the hero of the story since I was a child, and I also longed for a good friend like the Scarecrow. It's a great experience to find myself in a colorful magical environment," said Sara Cammarata, the actress playing the role of Dorothy Gale in the musical. "We often have excellent quality but don't know ourselves. I hope I will find the most authentic me and become a better self through the performance," said Nick Gurinsky, the actor played the role of the Tin Woodman.The Wizard of Oz was adapted from the classic children's book The Wonderful Wizard of Oz by L. Frank Baum, the father of US fairy tales. It tells the story of a girl named Dorothy Gale who goes on an adventure with her friends, the Scarecrow, the Tin Woodman and the Cowardly Lion. They try to crack the evil witch's plot and help her find a way home.There have been many musical versions of The Wizard of Oz. The version for the current Chinese tour is based on the version created by the Royal Shakespeare Company in 1987. This version premiered in the West End of London that year to great success. Over the three decades since then, the musical has toured to many cities around the world, winning praise from audiences, according to Marc Ciemiewicz, the manager of the musical troupe.Twenty-two performances of The Wizard of Oz will be performed at the Tianqiao Performing Arts Center until June 30, after which it will head to other cities in China, including Shanghai, Xiamen and Quanzhou in East China's Fujian Province and Ningbo in East China's Zhejiang Province.