CULTURE Bruce Arians comes out of retirement to coach Buccaneers

Bruce Arians comes out of retirement to coach Buccaneers 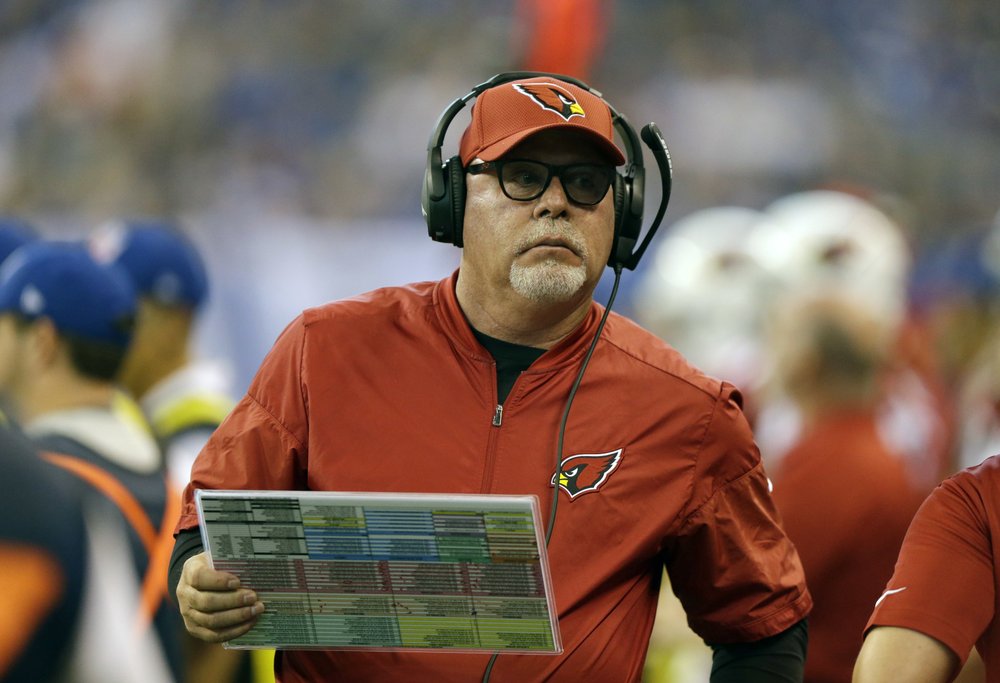 In this Sunday, Sept. 17, 2017 file photo, Arizona Cardinals head coach Bruce Arians watches during the first half of an NFL football game against the Indianapolis Colts in Indianapolis. (Photo: AP)

Bruce Arians is the latest coach entrusted to transform the struggling Tampa Bay Buccaneers into winners.

The 66-year-old came out of a one-year retirement Tuesday to fill the team’s fifth coaching vacancy in a decade.

Arians replaces Dirk Koetter, who was dismissed Dec. 30 after leading the Bucs to 19 wins and no playoffs berths over the past three seasons.

Arians coached the Arizona Cardinals for five years, stepping down after the 2017 season with a 50-32-1 record that included one division title, two playoff berths, three seasons with double-digit wins and one NFC championship game appearance.

"Bruce Arians is one of the NFL's most well-respected coaches over the past two decades and we are excited to have him leading our team," Bucs owner/co-chairman Bryan Glazer said in a statement.

"Throughout this process, we focused on finding the right coach with a proven ability to elevate our players and lead our team forward," Glazer added. "Bruce has played a large role in the development and career success of some of our league's best players and we look forward to seeing him continue that work here with our franchise."

The Bucs, who've finished last in the NFC South seven of the past eight seasons, haven’t made the playoffs since 2007 — the second-longest drought in the league. They haven’t won a postseason game since their 2002 Super Bowl run under Jon Gruden.

Gruden was fired 10 years ago this month.

Arians is the latest in a line of successors that includes Raheem Morris, Greg Schiano, Lovie Smith and Koetter, who landed the job in 2016 primarily because ownership felt his offensive expertise would accelerate the growth of young quarterback Jameis Winston.

Arians was believed to be the front-runner all along because of his familiarity with Licht, who was vice president of player personnel for two seasons in Arizona before moving to Tampa Bay as GM in 2014.

The Bucs fired Koetter after consecutive 5-11 finishes that dropped his three-year record to 19-29.

During Koetter's stay with the Bucs — first as offensive coordinator, then as a first-time NFL head coach who retained play-calling responsibilities for most of his tenure — Tampa Bay posted four of the five most productive offensive seasons in club history.

The 2018 Bucs led the league in passing yards and amassed 500 yards total offense five times, yet were just 1-4 in those games. Turnovers and a porous defense were the main culprits.

The day after Koetter was fired, Licht made it clear that whoever wound up replacing the coach would inherit Winston as his starting quarterback.

"Jameis Winston will be here," the GM said of the No. 1 overall pick from the 2015 draft, who’s due to earn $20.92 million next season in the final year of his rookie contract.

Winston sat out the first three games of this season while serving a suspension for violating the NFL's personal conduct policy and was benched twice after regaining the starting job because of inconsistent play.

The 25-year-old has 75 career turnovers, including 58 interceptions. Jacksonville's Blake Bortles (76) is the only QB who’s turned it over more over the past four seasons.

But Winston, who's 21-33 as a starter and only led the team to one winning season in four years, has not been a bust.

The Bucs are counting on Arians to help Winston realize his potential.

Among the high-profile quarterbacks he has worked with during a long coaching career are Peyton Manning, Ben Roethlisberger, Carson Palmer and Andrew Luck.