CULTURE Brushing up on history of Tomb Sweeping Day

Brushing up on history of Tomb Sweeping Day 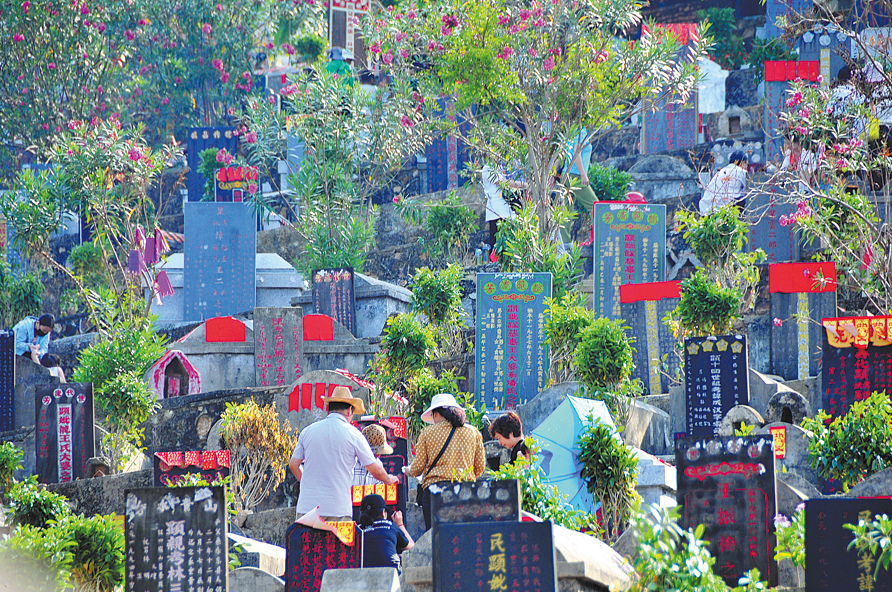 The main custom of the festival is tomb sweeping, during which families gather at a grave site and bring sacrificial offerings including alcohol, fruit and joss paper, spiritual money for use in the afterlife. [XU FEI/SUN QING/FOR CHINA DAILY]

The famed Tang Dynasty (618-907) poet Du Mu wrote that a "drizzling rain falls like tears on the Mourning Day, the mourner's heart is going to break on his way".

To most people these sentiments reflect what the Tomb Sweeping Festival, or Qingming, is all about; honoring ancestors and dealing with the emotional loss of loved ones.

However, the festival's history spans thousands of years and has gone through many changes and absorbed other traditions along the way.

It is the only Chinese public holiday that is also one of the 24 Chinese solar terms, which follow the cycles of nature. Qingming falls on the fourth or fifth day of April, when spring begins and the weather becomes warm.

Ancient texts have depicted the rebirth that arrives with spring. Philosophical writings from Huainanzi (Master Huainan) during the Western Han Dynasty (206 BC-AD 24), state, "fifteen days after the Spring Equinox …the clear and bright wind arrives."

Another line passed down from the lost book Suishi Baiwen says, "all growing things are clean and pure at this time, hence the name qingming". 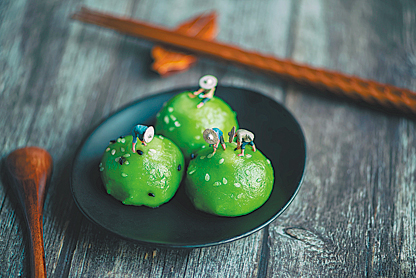 It is a tradition for people from southeast China to eat qingtuan, green rice cakes during Qingming. [XU FEI/SUN QING/FOR CHINA DAILY]

While the solar term Qingming was first recorded in the Western Han Dynasty, it was not until the Tang Dynasty, that it was decreed a national holiday to honor the dead, and combined with customs from other festivals which occur at the same time.

One of those festivals was Hanshi, meaning "cold meal", which fell two days before Tomb Sweeping Day. For three days, ancient people refrained from using fire and ate only cold meals.

The tradition was born out of a story about a wronged loyal official. During the Spring and Autumn Period (770-476 BC), Emperor Wen of Jin, before ascending the throne, fled the country for 19 years, protected by a court official named Jie Zitui.

After gaining the throne, he was keen to call on Jie's services once again, but as Jie did not value titles or money, he rejected the offer and chose to live in the mountains with his mother. The emperor listened to the advice of other officials and tried to force Jie out of the mountains by starting a fire but ended up killing him.

To pay tribute to Jie, the emperor issued an order that people are forbidden from using fire and can only eat cold food on the day.

Shangsi, another festival that influenced Qingming, falls on the third day of the third lunar month. The festival celebrates the revitalization of nature, washing away the bad aura from the previous year and praying for good health. Taking walks outdoors and holding banquets also became customs of the festival.

The boundaries between these three festivals began to diminish after the Tang and Song (960-1279) dynasties. However, during the Ming and Qing dynasties (1368-1911), the Hanshi and Shangsi festivals both largely vanished.

Xiao Fang, a professor at Beijing Normal University and an expert on folklore, writes in his book Records and Concepts of the Seasons that Qingming, being both a period focusing on nature and one of traditional rituals, reflects the ancient Chinese philosophy of heaven and humanity as a whole.

"The customs of Tomb Sweeping Day are varied, but they can be summarized into two traditions," Xiao says. "First is to perform funeral rituals for the deceased and earnestly offer sacrifices to ancestors, and the second is to get close to nature and cherish life." 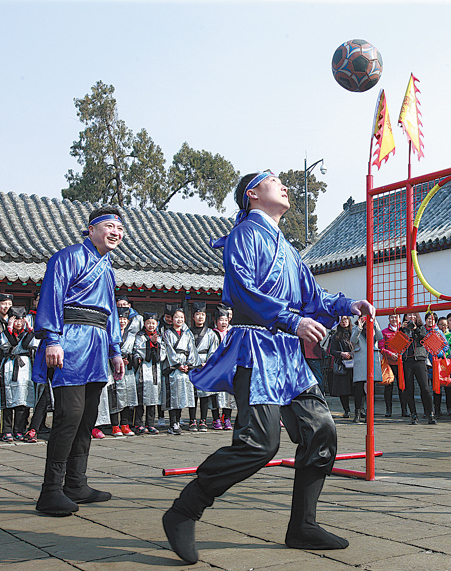 The main custom of the festival is tomb sweeping, during which families gather at a grave site and bring sacrificial offerings including alcohol, fruit and joss paper, spiritual money for use in the afterlife.

Headstones and tombs are cleaned and weeded, the offerings made and joss paper burned as relatives bow and kowtow to pay tribute to the deceased.

Those who cannot travel to the graves will carry out the ceremony on a mountain or beside a river, facing the direction of the final resting places.

Families also take the opportunity to make an excursion to the countryside to appreciate the spring blossoms.

The day is not solely about sorrow, solemnity and decorum, but it also gives mourners their own opportunity to find inner peace by communing with nature.

Picking willow branches is an old custom that has mostly disappeared today. One explanation is that it is to pay tribute to Jie, the wronged official, for his dignity, while another says it is to pay tribute to the mythical emperor Shennong who legend says discovered that herbs can cure diseases. In ancient times it was believed that wearing willow branches or catkins on one's head or placing them in front of a door can help keep vermin at bay. 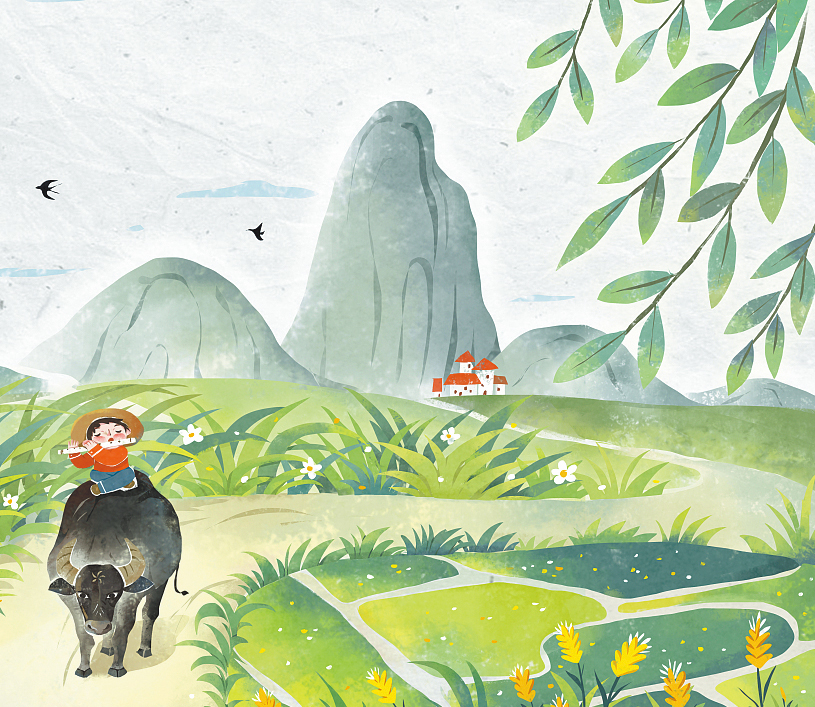 Kite flying and riding on swings are also traditions of the festival. According to Qingjialu, a book from Qing Dynasty recording the customs of East China, "The wind of spring comes from below, and the paper eagles rise to the sky, hence the proverb 'the kite is released at Qingming'."

In ancient times, people would write down their illnesses and troubles on pieces of paper and attach them to a kite. When the kite was high in the air, they would cut the string and let the it fly away on the wind in the hope of literally cutting loose their problems.

It might sound unlikely, but a form of Chinese football called cuju was once a popular activity on Tomb Sweeping Day. Emperors from the Tang Dynasty with a passion for watching the ancient game organized competitions for the nobility and officials.

This curious amalgam of ritual ceremonies and outdoor entertainment also demonstrates the Chinese view of life and death. The Analects of Confucius state that filial duty does not require the living to drown themselves in grief, but to cherish life more because of death.

Ceremonies of sacrifice to give thanks were common in ancient China, from the imperial courts to commoners' households.

Sacrificial ceremonies, apart from during Qingming, were held to mark the solar terms. Winter solstice, for instance, honored the sky, and the summer solstice honored the earth.

Therefore, Tomb Sweeping Day is not only about the obligations of filial duty, but also expressing joy and gratitude for life.

"The philosopher Zeng said, 'Let there be a careful attention to perform the funeral rites to parents, and let them be followed, when long gone, with the ceremonies of sacrifice－then the virtue of the people will resume its proper excellence'," the analects said.