BTS and Coldplay team up to rock the American Music Awards 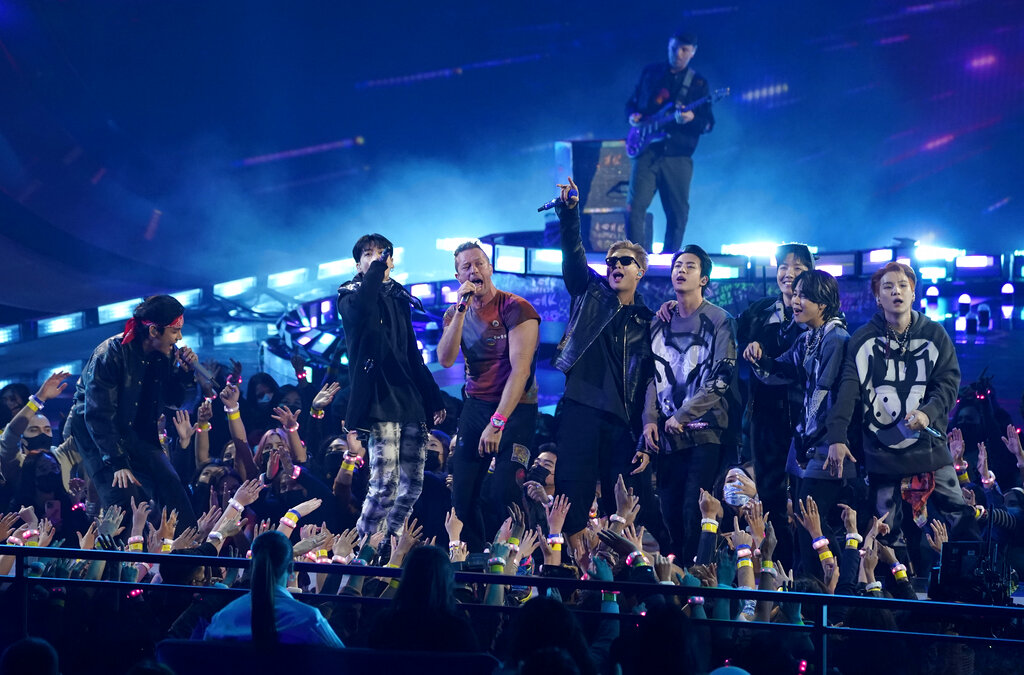 Coldplay and BTS perform "My Universe" at the American Music Awards on Sunday, Nov. 21, 2021 at Microsoft Theater in Los Angeles. (Photo: AP)

BTS and Coldplay — two of the biggest groups on Earth — teamed up Sunday for a live and raucous version of their cosmic collaboration “My Universe” as the American Music Awards celebrated the best popular music for a second pandemic year.

Silk Sonic’s Bruno Mars and Anderson .Paak kicked off the awards on a R&B funky pre-taped note with their “Smokin Out the Window” and host Cardi B in a fur headdress revved up the crowd, admitting she was sweating.

BTS once again claimed the favorite pop duo or group award, excitedly bounding on stage and thanking their devoted fans for their three-peat.

An earlier scheduled performance of “Butter” by the joined forces of BTS and Megan Thee Stallion has been scrapped after the rapper cited personal reasons for dropping out Saturday. That led to the Coldplay and BTS mashup.

The Disney actor and singer-songwriter has seven nominations, besting five-time winner The Weeknd with six. He's also going up against Rodrigo in the artist of the year category along with BTS, Ariana Grande, Drake and Taylor Swift.

The fan-voted awards show was airing live from Los Angeles on ABC. Nominees were based on streaming, album and digital sales, radio airplay and social activity, and reflect the time period of Sept. 25, 2020, through Sept. 23, 2021.

Machine Gun Kelly grabbed the favorite rock artist award. “I want to accept this for all the aspiring musicians, the one who desires to play an instrument, wants to rap, wants to sing, not just not just the rock artists, but all the artists,” he said.

Highlights on the telecast will include Underwood and Jason Aldean singing their duet “If I Didn’t Love You,” Kane Brown performing “One Mississippi” from Tennessee State University and New Edition and New Kids on the Block performing together for the first time.

Reggaeton star Bad Bunny, R&B newcomer Giveon and Doja Cat each have five nominations each. In the new artist of the year category, Rodrigo joins Giveon, 24KGoldn, Masked Wolf and The Kid LAROI.

Swift, who currently holds the record for the most awarded artist in AMA history with 33, could further extend her streak. She is nominated for two more awards — artist of the year and favorite pop album for “evermore.”

If Rodrigo wins a majority of the awards she is nominated for, that would put her in good company. Olivia Newton-John and Justin Bieber are tied for four awards won in their first year nominated.

The Associated Press was not able to transmit images of Cardi B while she was onstage because her representatives required approval, a restriction the AP would not accept.