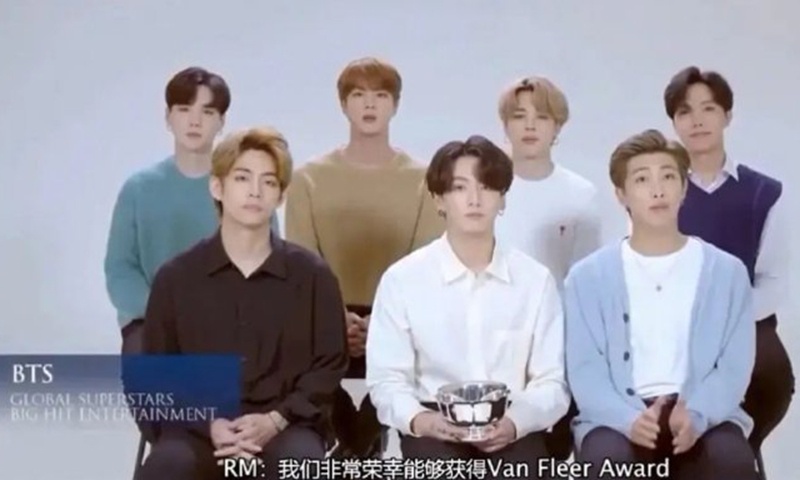 South Korean hit boy band BTS's mention of the 70th anniversary of the Korean War after receiving an award, which reflected a one-sided attitude, has enraged Chinese netizens as many Chinese fans decide to quit the band's fan club.

There are many commemorative activities being held during the 70th anniversary of the War to Resist US Aggression and Aid to Korea, also known as the Korean War in China including film and TV works such as The Coldest Gun, directed by Chinese renowned director Zhang Yimou.

After receiving the General James A. Van Fleet Award, which is one of the most prestigious awards in the field of US-Korea relations, the team leader of BTS said online that "we will always remember the history of pain that our two nations share together and sacrifices of countless men and women."

Two nations he referred to are the US and South Korea. Many Chinese netizens pointed out that the speech plays up to US netizens, but the country played the role of aggressor in the war.

The hashtag  #BTS ranked 3rd on the hot search chart of China's Twitter-like Sina Weibo after the speech went viral on the platform on Sunday afternoon.

Chinese fans of BTS have different attitudes to the incident. Some of them chose to understand the band, while others insisted that there is no idol who is superior to the motherland.

"There were thousands of Chinese soldiers who sacrificed their lives in the war. You are South Korean people and you can say that, but I am Chinese so I decided to be angry and quit the boy band's fan club to express my clear attitude," one BTS fan surnamed Li told the Global Times on Sina Weibo on Sunday.

"Why can they ignore our feelings. We also try our best to support all of their albums and votes." one netizen asked.

Some fans were more understanding and recalled how the band cares about Chinese fans.

"They did express their love to China and Chinese fans many times. I want to believe in them and hope they can be more cautious when talking about some political issues next time," another fan who asked to be unnamed told the Global Times.