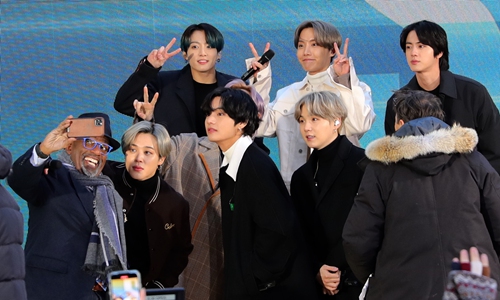 The newest album from South Korean boy group BTS swept global social media and video platforms immediately after its release on Friday, including China's Twitter-like Sina Weibo. Similar to previous releases, members of ARMY, the official name of the BTS fandom, have been captivated by the heart-stirring and meaningful lyrics of the songs.

Map of the Soul: 7, a comprehensive 20-song collection, had sold more than 4 million in presales and on the first day of its release it immediately topped the iTunes charts in 93 countries and regions, setting a new record for the K-pop industry.

The number seven in the album's name has two meanings, referring to the seven members of the group and the seven years that have passed since their debut. The title hints that the album is meant to be a record of the band's journey and how they have grown since their debut.

Member Jungkook said in the clip that the songs in the album display what the band had hidden from the public. He noted that these hidden aspects are also a part of BTS and that they have endeavored to accept as they continue their journey.

The album has been well received by members of the Chinese ARMY.

"You need to listen to them from the heart if you want to understand what they are trying to say. Their lyrics are beautiful and positive like 'Begin with tininess but end with greatness,' which has inspired me so much," one of the band's Chinese fans told the Global Times on Sunday.

This message in their songs has been a key point for fans.

Fan said that the band's songs encourage young people to overcome difficulties and "can give them power."