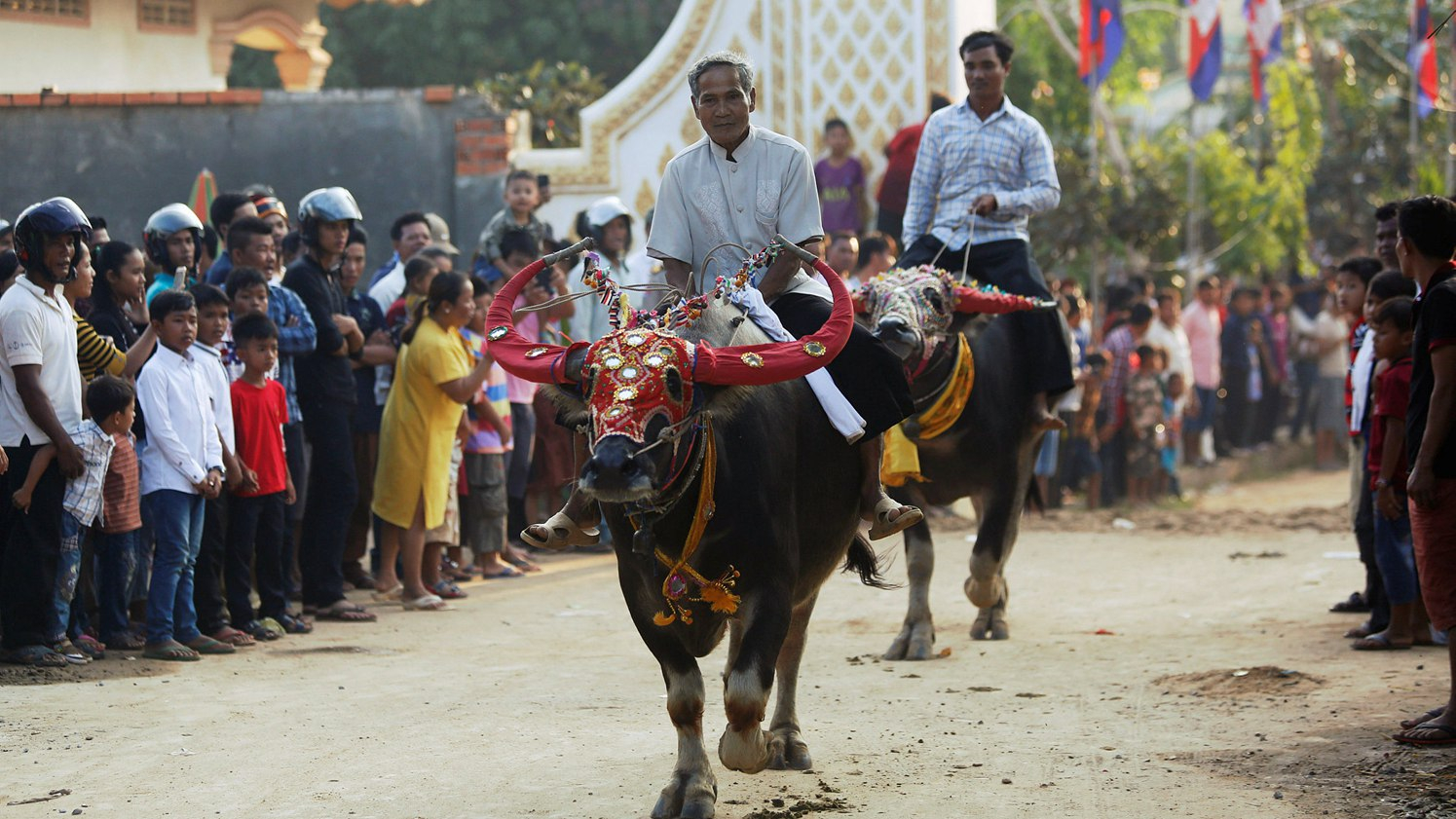 With their heads and horns covered in sparkling decorations, water buffalos were raced at Vihear Sour pagoda in Cambodia on Tuesday in a bid to preserve the almost a century old tradition.

The race is part of a ceremony hosted by residents in Vihear Sour Village to mark the end of the Pchum Ben Festival, or the Ancestors' Day.

At the annual event, racers rode their buffalos up and down a 450-meter narrow dirt track, which was flanked by thousands of avid spectators.

Heng Than, head of the buffalo racing committee, said 16 buffalos took part in the race this year, up from only six buffalos at the event last year.

"We have encouraged buffalo owners to join the race in order to preserve this age-old tradition, and we hope that more buffalos will partake in the event next year," he said, adding that the committee awarded 50,000 riels (12.5 US dollars) to each jockey.

Interspersed with buffalo race were a horse race and other events, including traditional wrestling and prayer ceremony for the dead ancestors.

Buffalo rider Yan Than said he has participated in the competition for 10 consecutive years in order to conserve the tradition that has existed in the village since the 1920s and to celebrate the Pchum Ben festival.

"The race is for fun only, not for winning or losing," he said, "After the race, we ride on our buffalos back home and use them for farm work."

Another racer Chan Chin said he took part in the event every year for about two decades and wished to see the tradition alive forever.

"Buffalo race is the happiest event of the year for the villagers here and it has attracted visitors from all over Kandal province, Phnom Penh City, Kampong Cham province, and Prey Veng province," he said.

One of the spectators Ros Chhim said he had never lost his excitement in seeing the race although he had watched it every year since he was a child.

"It creates a fun atmosphere for us and all visitors to the Vihear Sour pagoda," the 54-year-old Kandal man said.

He said in the past, a lot of buffalos joined the race, but now the number of the beasts is on the decline because farmers had no appetite in raising them after they had used mechanical farming equipment to replace the animals in farm work.

"I remember that in the 1990s, there were about 60 buffalos taking part in the annual race, but in recent years, there have been only more than 10 buffalos in the race," Ros Chhim said. "Some farmers have sold their buffalos because the price is high, a pair of adult buffalos are sold at about 3,000 US dollars."

Vey Savin, a viewer from Prey Veng province, said it was the first time he took his 10-year-old son to watch the race because he wanted him to see the old-age tradition in the village.

"It's an interesting race, and I'm impressed with the buffalos, which are beautifully adorned with glittering headgear," the 42-year-old father said while using his smartphone to capture the views of the race.