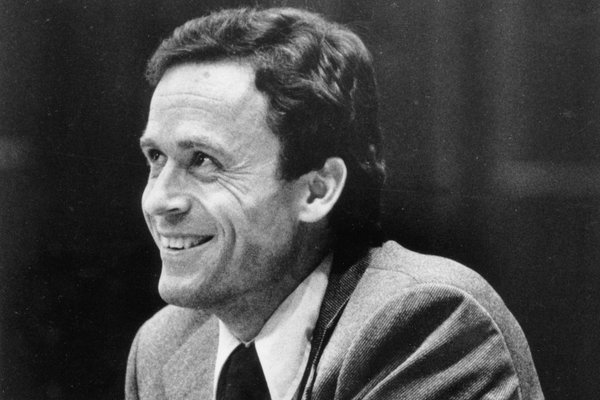 In this June 27, 1979 file photo, Ted Bundy smiles during the second day of jury selection for his murder trial in a Dade County courtroom in Miami, Fla. (Photo: AP)

She kept her eyes on the dapper, wavy haired man who smiled, winked and exuded self-confidence as the courtroom proceedings moved along.

“I don’t know what it is he has, but he’s fascinating,” the teenage spectator explained to me at the time. “He’s impressive. He just has a kind of magnetism.”

It was that beguiling magnetism that investigators said helped make the object of her interest — Ted Bundy — one of the nation’s most prolific serial killers, with at least 30 women and girls’ deaths linked to him in a multiple-state spree that spanned the late 1970s.

I reported the teenager’s comments for The Associated Press’ coverage of Bundy’s 1979 murder trial in Miami, the first of two murder trials he would have in Florida. She was just one example of a regular courtroom backdrop of spellbound female spectators who were “attractive, young and single,” as I wrote at the time, just like the women Bundy was on trial for bludgeoning and sexually assaulting.

“I haven’t lost any sleep about the verdict,” a relaxed, self-assured Bundy told me in a jail-cell interview a few days after the jury swiftly convicted him of murdering two Florida State University sorority sisters and assaulting three other young women in Tallahassee.

Nearly 40 years after that trial, and 30 years after his death in Florida’s electric chair, Bundy’s deadly charm continues to captivate and perplex.

Some reactions to a new Netflix documentary series, “Conversations with a Killer: The Ted Bundy Tapes,” prompted a Twitter appeal to viewers asking them to chill out about his “alleged hotness,” adding there are many other attractive men featured on the streaming service who aren’t convicted serial killers. Nearly simultaneously, a movie starring heartthrob Zac Efron as Bundy recently made its debut at the Sundance Film Festival with some criticisms that the film, shot last year in the Cincinnati area, glamorizes the killer. A Vanity Fair reviewer wrote that “at its worse, the movie feels almost sympathetic to Bundy.”

Filmmaker Joe Berlinger, who is the director for both projects, acknowledged in a Salt Lake Tribune interview he had tackled “a very polarizing subject” with Bundy, but insisted there’s no glorification. His movie hasn’t yet been scheduled for wider release. Efron, by the way, isn’t the first hunky actor to play Bundy — Mark Harmon starred in the 1986 TV miniseries “The Deliberate Stranger.”

The July 1979 trial I helped cover was for Bundy’s rampage on Jan. 15, 1978 in Tallahassee, Florida. Armed with an oak limb, Bundy left two Chi Omega sorority sisters dead and three other women injured. Less than a month later, on Feb. 9, he abducted, sexually assaulted and killed a 12-year-old girl in Lake City, Florida. She was Bundy’s final victim in a gruesome spree that claimed the lives of dozens of women in states from Washington to Florida.

During the trial, I interviewed other young women in Miami who talked about Bundy’s handsome looks and expressive eyes, and also the chilling testimony about his crimes. A University of Washington psychiatry professor talked in a telephone interview about him giving women “Dracula shivers.”

Jurors deliberated less than seven hours on July 24, 1979, before convicting Bundy, then 32, of the Chi Omega murders. Three days later, I was assigned to go to Dade County Jail and find out what I could about what he was doing, who was visiting him and whether he was causing problems for jailers as he had at times during the trial.

A sergeant noticed I had been waiting for a while and asked who I was there to see. “Ted Bundy,” I replied quickly. He took me to a visiting cell where Bundy was meeting with one of his attorneys. The cell door closed behind me. I introduced myself, and it was clear by his grin that Bundy was amused by my audacity.

Despite the attorney’s uneasiness about an unplanned interview, I sat while Bundy, unshaved and dressed in jail grays left open at the top, leaned back on his elbows on a bench, and went to work on me.

He told me he was innocent, of course. Repeatedly. So innocent, he explained with that same grin spreading across his face, he wasn’t losing any sleep. “I’m not trying to sound callous. ... I’m very confident we have a good appeal.”

He professed to be surprised and disappointed by the jury’s relatively quick verdict after a five-week trial with complicated forensic evidence. He told me it would take a mind like “William S. Burroughs” to explain it. Not a fan of the Beat generation author he referenced, I didn’t get what he meant, other than to show he was well-read.

Bundy expected the death penalty but said he’d be “kind of stupid” to predict what Judge Edward Cowart would decide. He then imitated the judge’s drawl: “Ah can only hope that the judge will look at mah case with an open mind.”

Bundy had me smiling, and he left me wondering about the contrast between this personable, engaging man across from me and the ruthless killer the jury found him to be.

The next week, Judge Cowart sentenced Bundy to die for “extremely wicked, shockingly evil and vile” crimes — a quote that became the title of the new movie. Yet, as he had throughout the trial, Cowart showed judicial firmness mixed with some homespun warmth toward the former law school student who sometimes insisted on questioning witnesses, raising objections, and disrupting his defense team.

Cowart called him “a bright young man” who could have been a good lawyer, one he would “have loved” to have practice before him. “But you went another way, partner,” Cowart said. As deputies prepared to take Bundy away, Cowart added softly: “Take care of yourself,” and Bundy thanked him.

Eight years later, I would write an obituary for Cowart, a former police officer turned judge who died at 62.

A series of attorneys filed appeal after appeal for Bundy. One blamed the “Bundy mystique” for making it impossible for him to get a fair trial. Several argued he was insane.

Al Carlisle, a Utah State Prison psychologist who had interviewed Bundy extensively, understood the difficulty people had believing that the Bundy they saw could be such a calculating, remorseless killer. The courts ruled Bundy was competent.

He knew what he was doing, Carlisle explained to me years ago. Charm was one of his weapons.

“He believes he’s smarter than everybody else and that he’s going to play the pieces right, and win the chess game,” Carlisle said.

It ended Jan. 24, 1989, in Florida’s electric chair after he had ended his denials with sometimes-emotional confessions in his final days.

Hundreds of people, women and men, were thronged outside the prison. But this time, most were there to cheer his death.